Can Forced Recapitalization Solve the “Too Big To Fail” Problem?

From the perspective of an outside observer, the debate over financial regulatory reform can seem like nothing more than the typical Beltway chatter full of shrill voices and political posturing.  While the current debate is not free of the usual nonsense, it is important to note that the discussion has at least refocused on the “too big to fail” problem rather than fixating on consumer protection issues that consumed a great deal of time last year.  There is nothing wrong with inquiries into whether credit card and overdraft fee regulations should be changed, but action in such areas will do nothing to prevent the next financial meltdown. 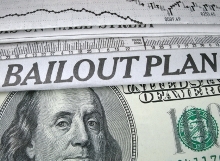 One interesting proposal was recently presented by Paul Calello and Wilson Ervin in a guest article for The Economist.  Mr. Calello is the head of Credit Suisse’s investment bank and Mr. Ervin is the former chief risk officer of Credit Suisse.  The authors argue that regulators should not have to choose between massive taxpayer bailouts and the potential for a catastrophic systemic collapse.  Instead, they argue that a rapid modification of a troubled firm’s capital structure  can result in a “bail in” that reduces systemic risks and mitigates the need for taxpayer funded infusions.  Such a bail in would require regulators to have sufficient power to wipe out common equity holders and recapitalize the financial institution by converting preferred shares and debt into equity.

A Rapid Form of Pre-Packaged Bankruptcy

The authors are actually proposing a very rapid form of pre-packaged bankruptcy since such restructurings are not uncommon in other industries.  The problem with most negotiated recapitalizations is that the process can take a significant amount of time before all stakeholders agree to the terms.  With a major financial institution, such time is simply not available since confidence in the franchise would be harmed beyond repair in a matter of days.

In order to make this approach work, regulators will need to have the power to dictate terms of the recapitalization over a very short period of time – most likely over a “marathon” weekend working around the clock.  As a result, the process and terms of such a recapitalization would need to be known by all parties well ahead of time.  Looking at it from this perspective, the approach is not much different from the “living wills” that some have suggested all financial institutions must set up ahead of any crisis.

A Treatment, Not a Cure

The idea of a regulator having the power to make massive changes to a financial institutions capital structure over a 48 hour period is enough to make free market advocates cringe.  But if the alternative is to permit a massive systemic collapse of the financial system or to expose taxpayers to the costs of bailing out the banks, something like the “bail in” plan may be the best of several undesirable options.

From a free market perspective, the better approach is to examine ways to reduce the number of financial institutions that are too big to fail without creating systemic risks.  While it is true that regulations would need to be imposed that limit the size and/or scope of activities the banks are permitted to engage in, these regulations would be of the “blocking” variety rather than the “micromanagement” variety.  In other words, regulators would block banks from becoming systemically important but would otherwise leave management alone to run the business.  Then managers and owners of the business can be left to determine the appropriate level of risk to accept without putting the taxpayer on the hook for cleaning up after a failure.

Can Forced Recapitalization Solve the “Too Big To Fail” Problem?