Over the past few years, many obituaries of the newspaper business have been written.  The growing tsunami of instant information combined with increasing accessibility to this information has shaken the comfortable “moat-like” business model of newspapers to the core.  Few other case studies better define Joseph Schumpeter’s concept of “creative destruction”. 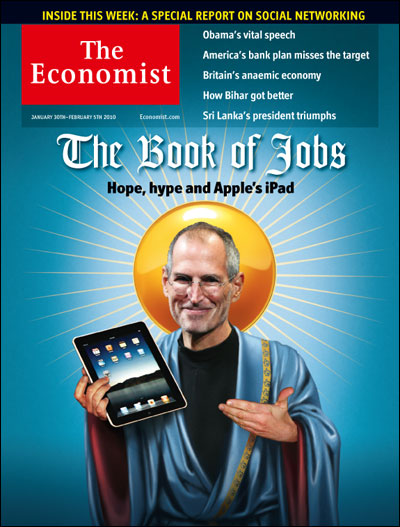 Steve Jobs has been a leading technology visionary for the past three decades and has already transformed the music industry.  Ten years ago, free music downloads threatened the very core of the music business.  Consumers began to view pirated music downloads as “normal” and traditional sales of CDs plummeted.  The iPod and the iTunes music store did not fully make up for the music industry’s lost revenues but a new economic model was born.  The latest issue of The Economist considers whether Steve Jobs may represent salvation for newspapers and magazines.  The iPad device has many attributes that could induce consumers to read newspapers electronically with a form factor that may be superior to traditional print.

The internet provides a great deal of free content from traditional newspapers as well as “new media” such as blogs and wikis.  While much of this free content is useful, the need for authoritative sources has not diminished.  This is particularly true for financial journalism which is why The Wall Street Journal and Financial Times have already succeeded in charging for online content.  The business model is clearly broken for most other newspapers not offering much differentiated content.

From initial reviews of the iPad, it looks like readers may get a superior experience through the mix of written content, embedded videos, and an attractive “newspaper-like” form factor.  If Mr. Jobs can deliver a solution for newspapers similar to what he accomplished with music, the cover of this week’s Economist may end up being justified.

The video shown below provides some additional perspectives on the iPad device in a “Tea with the Economist” interview of Jay Rosen, a Professor of Journalism at NYU and prominent authority on recent trends in “new media”.