While reviewing the Bureau of Economic Analysis (BEA) “advance estimate” of Q4 2009 GDP, it seems instructive to revisit the Q3 2009 “advance estimate” which was discussed here exactly three months ago.  A quick review suggests that there is little point in treating preliminary reports too seriously due to significant inaccuracies which often result in subsequent revisions.  While investors and politicians always fixate on the advance number, few outside the economics profession seem to pay much attention to subsequent revisions.

Since we know that subsequent revisions are likely, the advance estimate should be treated with some skepticism.  Nevertheless, a quick review is still interesting.  In addition to the data in the main release, the BEA has an interactive tool that can be used to generate tables such as the report shown below which breaks down the contributions to the percentage change in real GDP (click on the image for a larger view of the data): 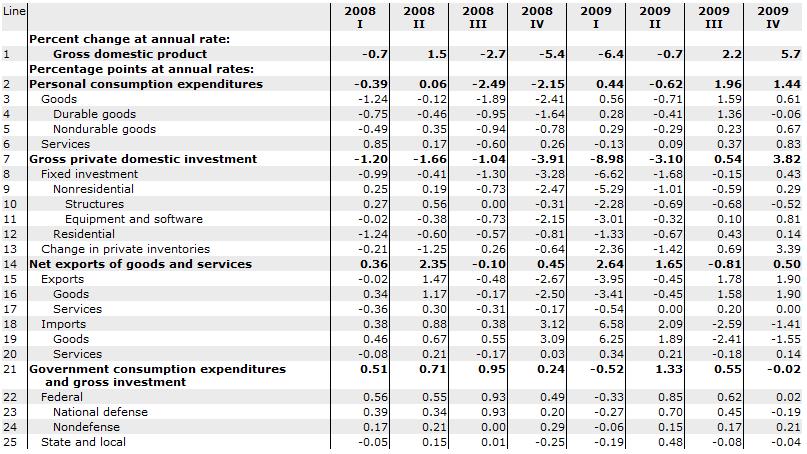 From the table, one can quickly see that inventories accounted for the bulk of the growth in GDP for the quarter with a 3.39 percent contribution.  Private business decreased inventories by $33.5 billion in the fourth quarter compared to a decrease of $139.2 billion in the third quarter.  Real GDP measures production, not final sales, so changes in inventories can often have a major influence on reported GDP numbers.  In this case, the decrease in the rate of inventory liquidation accounts for a major boost to GDP.

The report shows signs of weakness in other areas including anemic growth in personal consumption.  Notably, final sales of domestic product (GDP less changes in private inventories) only increased 2.2 percent in the fourth quarter.  Although this is a slight improvement over the 1.5 percent increase in final sales in the third quarter, growth is still quite slow.  It appears that GDP growth in the first quarter may depend on whether companies decide to begin building inventories rather than only reducing the rate of inventory liquidation.

While it is understandable for markets to react to the advance estimate, it is less obvious why revisions to the initial estimate attract little attention in comparison.  To the extent that investors consider macro factors at all, which is itself a debatable practice, more attention should be given to the second and final revisions to GDP and less to the advance estimate which is only an “educated guess” based on incomplete data.