Legendary investor Philip A. Fisher was a great believer in the utility of the “business grapevine” when it comes to researching candidates for investment.  In Common Stocks and Uncommon Profits, which was reviewed here in April,  Mr. Fisher lays out a step by step approach that  can be used to identify businesses that are not merely “cheap” but have excellent future prospects.  Scuttlebutt is an approach that attempts to gain valuable insights into businesses through multiple channels:

The business “grapevine” is a remarkable thing.  It is amazing what an accurate picture of the relative points of strength and weakness of each company in an industry can be obtained from a representative cross-section of the opinions of those who in one way or another are concerned with any particular company.  … Go to five companies in an industry, ask each of them intelligent questions about the points of strength and weakness of the other four, and nine times out of ten a surprisingly detailed and accurate picture of all five will emerge.  (Common Stocks and Uncommon Profits, page 17)

In addition to competitors, Mr. Fisher suggests approaching vendors, customers, researchers, trade associations, and others who can shed light on the standing of a business within its industry.

For anyone who has attempted to actually put this advice into practice over the past few years, it is likely that some frustration has been encountered because most business executives are not willing to speak to investors due to regulations designed to “level the playing field” for all investors.  Many investors also lack the contacts required to seek informal “off the record” input.

How can Twitter be useful for modern scuttlebutt?  Many will dismiss this idea entirely since it is often assumed that Twitter is merely a platform for people who wish to share what they had for lunch with the world.  I had this attitude until earlier this year when I began to use the service in conjunction with starting this website (follow me on Twitter).  Since then, I have found some interesting ways to use Twitter to gain some insight into the “word on the street”.  It is amazing how much people are willing to say directly about company developments, morale issues, layoffs, and other topics in what is perceived as an informal and unguarded environment.  Here are some steps that can be used to follow tweets on a company you are interested in learning more about. 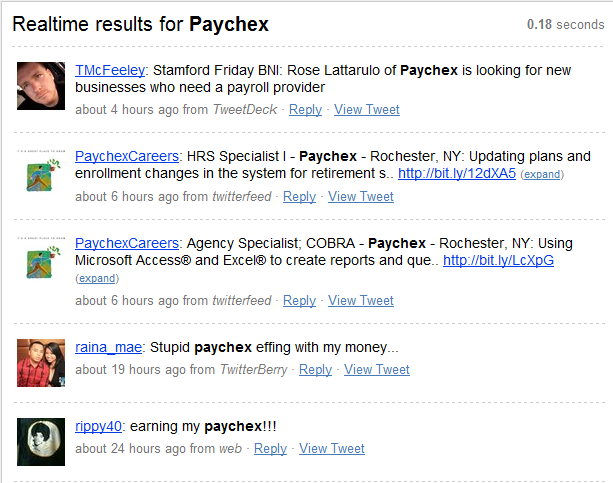 None of these tweets are particularly earth shattering from an investment insight perspective, but you can see that Paychex is attempting to hire staff at their Rochester headquarters, that someone is not all that pleased with Paychex, and some other tweets that are somewhat meaningless.

You can also see that there are roughly five tweets that have been posted about Paychex in the past day.  Similar searches can be set up for Paychex’s ticker symbol, although I have found that searching on ticker symbols typically yields less useful results.

It should be noted that searching for tweets works well on some companies but not on others.  Typically the largest companies will have an overwhelming amount of chatter on Twitter and the “noise” makes it less useful than similar searches on smaller companies.  For one extreme example, try searching for Microsoft on Twitter.  At the time of this writing, there were literally dozens of tweets posted over the past four minutes.

Although Twitter has a good search interface, it would be highly inefficient to manually search for this information all the time.  Luckily, Twitter allows us to set up customized RSS Feeds based on the results of a search.  Click on the “Feed for this query” link on the search results page shown below:

Depending on your browser settings, you will see various options related to how the feed results should be delivered to you.  I personally use Google Reader to consolidate all of my RSS Feeds in a central location that I monitor on a daily basis.  Incidentally, the same approach can be used to keep up with SEC Filings since it is also possible to sign up for RSS feeds for periodic SEC reports.

What About the Noise?

Intelligent investors would never make capital allocation decisions based on what someone is tweeting on a given day.  Anyone can set up a Twitter account and stock scam artists and other promoters have been known to misuse the service.  To leverage Twitter appropriately from a scuttlebutt perspective, an investor needs to be able to filter out the noise and identify potentially useful tweets that shed light on a business.  Usually, reputable people using Twitter will have a reasonable number of followers and will post links and other useful information in addition to 140 character messages.  Many also have links to their website and other pertinent information.

Twitter should be viewed as an online water cooler where you can eavesdrop on people talking about all sorts of topics.  In some cases, Twitter has been the first communication medium in which layoffs, poor earnings, and other relevant news has been informally reported.  While it is always ill advised to make investment decisions based on unverified rumors, I have found that monitoring Twitter can sometimes lead to interesting insights that can be independently verified.  Used in this manner, I think that Phil Fisher would approve of Twitter as one of many ways in which today’s investor can seek information on investment candidates.

Disclosure:  The author owns shares of Paychex which is used as an example in the illustrations.  No statement or recommendation on Paychex as an investment candidate is being made in this article.