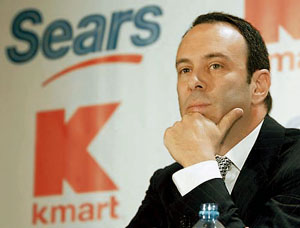 Edward Lampert, Founder of ESL Investments and Chairman of Sears Holdings Corporation, has released his annual letter to shareholders.  Mr. Lampert’s investment style has often been compared to Warren Buffett’s approach particularly when it comes to capital allocation.  While many companies fail to adhere to disciplined capital allocation practices, Sears has taken a more intelligent approach.

Mr. Lampert has been criticized for failing to make the necessary investments to keep Sears and K-Mart stores competitive.  Personal experience and anecdotal evidence does suggest that Sears Holdings retail properties are not necessarily the most modern facilities in many locations.  However, this fact alone does not automatically justify blindly committing funds to expansion or improvements beyond “maintenance” levels of capital expenditures:

I have written previously about what I believed was the reckless expansion of retail space leading to lower profitability for many retailers and to low or negative returns on the investment required to expand space. In other industries, consolidation rather than expansion has led to a more sensible competitive environment and better returns for shareholders. If you examine the level of capital expenditures over the past decade at many large retailers and compare that expenditure to value created, it would not paint a pretty picture.

Additionally, the dramatic declines in capital expenditures over the past couple of years at most large retailers are strong evidence that the level of maintenance capital expenditures for a big box retailer is materially below what many analysts and experts previously believed. Most of the capital spent over the past decade has been largely for store expansion, with some lesser amount required for maintaining existing stores.

The cost of updating or expanding properties must be weighed against the best possible alternative uses for the funds such as improving Sears’ strongest brands like Kenmore and Craftsman or authorizing share repurchases:

While we continued to repurchase shares during the economic crisis because the value was attractive and because we had significantly lower leverage than others in our industry, many of our competitors suspended their repurchase programs to appease credit rating agencies only to resume them again after their share prices recovered significantly.

While many executives only pay lip service to “shareholder value” and “management alignment with shareholder interests”, Mr. Lampert’s record and ownership interest in Sears Holdings serves to back up his claims.

We do some things differently than others, and we have certain beliefs that differ from theirs. Our culture is owner-oriented, because we have owners who serve on the board that governs the company. We believe that ownership makes a difference, especially when owners have significant financial interests in the company and a long-term perspective. Instead of this raising concern, rating agencies should welcome and value owners with a demonstrated track record of long-term value creation and conservative capital policies, even when some of the capital allocation preferences differ from those that others believe lead to higher long-term credit performance.

This is the type of owner orientation that makes it preferable to repurchase shares rather than plowing funds into capital expenditures at negative rates of return even though doing the latter is more popular within any organization in the short run and also will win the praises of local community leaders at ribbon cutting events.  The problem with companies that pursue popularity rather than intelligent capital allocation is that eventually the day of reckoning will arrive and the music will stop.

Wading into more controversial topics, Mr. Lampert is critical of policies that may over-regulate the economy by placing government bureaucrats in place of private sector capital allocators when it comes to sustaining an economic recovery.  In terms of financial regulation, Mr. Lampert advocates the removal of the implicit “too big to fail” guarantee which would level the playing field.  However, it is unclear how the government can remove the “too big to fail” perception without some form of regulation to constrain financial institutions from reaching the size and interconnectedness that makes government bailouts inevitable.

Capital can quickly reorganize and provide financing for businesses and projects that create value for our society, without the heavy hand of government planning and policy. I disagree with most people calling for a gigantic overhaul of our financial system led by new and “improved” regulations. Instead, begin the process of allowing more competition in financial services and begin the removal of implicit and explicit government guarantees that provide the perception that some are “too big to fail.” While there are those that claim that their institutions are not too big to fail, they surely recognize the significant competitive advantages that come from this perception. Of course they will accept regulations as long as these regulations do not permit additional competition from entities and institutions that do not take insured deposits, do not have access to Federal Reserve funding, and do not have government guarantees associated with their debt offerings. Regulatory capture comes when there is little competition allowed outside regulated entities and a “freezing” of competitors and innovation in an industry.

Mr. Lampert also protest the special treatment given to Amazon.com and other online retailers that are not required to collect sales and use tax in locations where they do not have a physical presence.  It is difficult to argue with the logic behind treating traditional retailers and online retailers in a uniform manner and the observation that current practices will prove unsustainable as more commerce shifts online.

The real story here is that it is not the payment of taxes or the charging of taxes that is at issue. It is the collection of taxes on behalf of local governments from purchasers of goods and services from stores in a locality or for use in such locality. It is the latter fact that is often ignored. A person who buys products from Amazon.com is required by law to pay sales or use tax to their local jurisdiction. In practice, almost nobody does so. The cost and unpopularity of enforcing such laws has allowed customers to avoid paying sales or use taxes, even though they are required in many states and localities. If you buy a work of art or piece of jewelry in NYC, for example, and have it shipped to New Jersey or California, the seller does not collect sales tax on that purchase but the buyer would be required to pay sales or use tax on the purchase where they receive the merchandise and use the merchandise. So, a piece of jewelry shipped to California would require the buyer to pay California sales or use tax.

Mr. Lampert recommends Thomas Sowell’s latest book Intellectuals and Society.  Although I have not kept up with Mr. Sowell’s work in recent years, I consider one of his previous books, The Vision of the Anointed, to be one of the best essays on the mentality that often drives the decisions of those in high positions of power.

Click on this link to read Edward Lampert’s full letter to Shareholders.

Disclosure:  The author does not own shares of Sears Holdings.