The Financial Times has published a five part video interview with Paul Volcker who is the head of President Obama’s Economic Recovery Advisory Board.  Mr. Volcker discusses his proposed “Volcker Rule” which would limit the proprietary trading activities of commercial banks.  For institutions such as Goldman Sachs that may wish to avoid the ban on proprietary trading, Mr. Volcker suggests that they will have to do so without the benefits of a commercial banking license:

“Don’t expect the support you would get from being a bank within the club of insured deposits and access to the Federal Reserve and all the loving attention you get as a bank organization.”

In addition, he characterizes the resolution process for non-banks as “euthanasia rather than life support” implying that regulators will have the authority to quickly take over and close down a non-bank in an orderly manner.  While it is not clear whether the Volcker Rule will pass in its proposed form, Mr. Volcker’s views are now clearly influencing the President’s policy choices.  This was not the case for much of 2009. 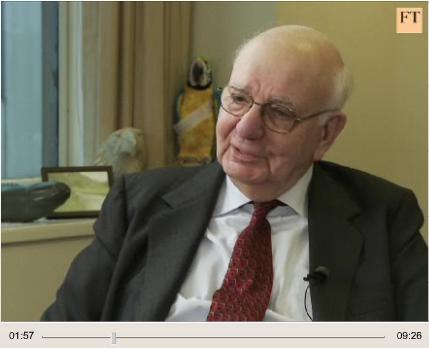 For RSS Feed Subscribers, click on this link for the first segment of the interview.

Paul Volcker: Euthanasia Rather Than Life Support for Failing Non-Banks