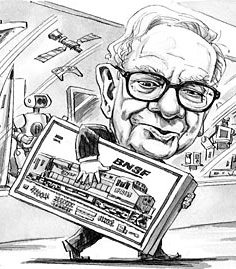 As documented in the proxy statement, Burlington shareholders were able to elect to receive either $100 in cash per share or a certain number of Berkshire shares.  The number of shares was determined by the daily volume-weighted average trading prices per share of Berkshire Hathaway Class A common stock over the ten day period ending February 10.

At the effective time of the merger, there were 264,507,424 shares of Burlington Northern outstanding, excluding the shares that were owned by Berkshire and its subsidiaries.  Berkshire announced the following breakdown between shareholders electing cash, stock, or indicating no preference:

Not all of the Burlington shares where stock elections were made could be paid fully in stock due to the terms of the proxy which dictated a final mix of 60% cash and 40% stock.  Burlington shareholders who indicated a preference for cash or no preference received all consideration in cash.

One major unknown variable that has concerned many Berkshire Hathaway shareholders in recent weeks was the effective price of Berkshire Hathaway shares that will be issued in the transaction.  We now have the answer.  To satisfy the stock portion of the transaction, Berkshire indicates that the company will issue 80,932 shares of Class A stock and approximately 21 million shares of Class B stock.  The calculation of the effective price per share is as follows:

Although Berkshire Hathaway stock has rallied over the past two days in anticipation of being added to the Standard & Poor’s 500 index, the effective price per share is lower since it is the average of the daily volume weighted trading price of Berkshire over the ten days ending on February 10.

For a spreadsheet with calculations of the final terms of the merger based on Berkshire’s press release, please select either the Excel 2007 or Excel 2003 link below.