Earlier this week, Noble Corporation announced that it has entered into an agreement to acquire Frontier Drilling in a cash transaction valued at $2.16 billion.  Frontier is a privately held independent drilling company with a fleet of three dynamically positioned drillships, two conventionally moored drillships, one deepwater semisubmersible drilling rig, and one dynamically positioned floating production, storage, and offloading (FPSO) vessel. In addition, Noble has entered into an agreement with Shell that favorably impacts backlog.

We profiled Noble Corporation in early June as part of the series of articles covering “unpopular” larger companies.  The series was inspired by Benjamin Graham’s approach of considering larger companies with financial strength as a potential source of investment ideas when such companies are generally out of favor.  Few industry sectors have been more out of favor than the offshore drilling industry in light of the Deepwater Horizon disaster.  At the time of our initial analysis, Noble appeared to be statistically cheap and conservatively financed.  The clean balance sheet has now presented management with the opportunity to purchase assets at distressed prices.

Noble will finance the $2.16 billion acquisition with a combination of cash on hand, use of an existing bank credit facility, and a new $800 million bridge credit facility.  Noble will secure permanent financing to replace the bridge loan and revolving credit facility.  Management anticipates that total debt will be approximately $3 billion at the end of 2010 with a debt to capital ratio of approximately 28 percent.  This is a significant increase from the 10 percent debt to capital ratio as of March 31, 2010 but management is confident that acquisition debt could be fully repaid within three years.  The transaction is expected to be accretive to cash flow immediately and to earnings starting in 2011.

Approximately 95 percent of Frontier’s backlog is with Shell and Noble has separately entered into agreements with Shell that are complimentary to the Frontier transaction.  Noble entered into ten year contracts with Shell for the Noble Globetrotter newbuild rig as well as one additional newbuild.  Each will have a fixed $410,000 dayrate for the first five years with a potential 15 percent bonus based on certain key performance indicators.  The dayrate over the subsequent five years will be based on a market index.

Noble also extended the contract for Noble Jim Thompson for three years at a $336,200 dayrate following the current contract expiration on March 1, 2011.  Noble Jim Thompson is currently in the Gulf of Mexico leased to Shell at a $505,000 dayrate so the extension terms are not as favorable.  However, Shell has agreed to suspend contracts during the moratorium in the Gulf at a reduced dayrate and contracts will be extended day for day once the moratorium is lifted. No force majeure early termination provision will exist for the newbuilds.

The combined impact of the Frontier acquisition and the agreement with Shell increases Noble’s backlog to $12.9 billion from $6.9 billion previously.  The exhibit below from Noble’s investor presentation illustrates the timing of the backlog.  While much of the incremental backlog is scheduled for the second half of the decade, the increase is still substantial. 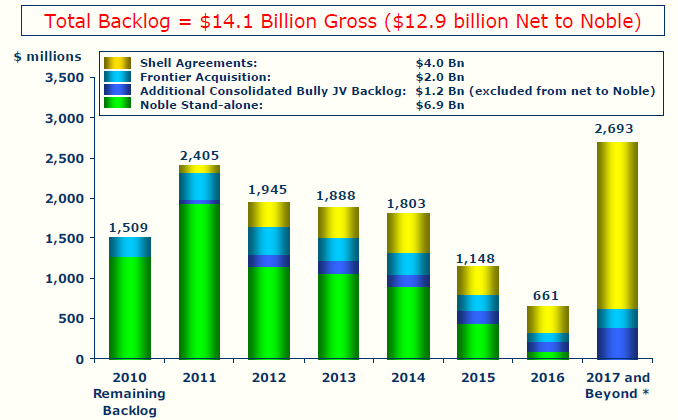 Based on the two deals, Noble will have the second largest contracted backlog in the industry behind Transocean.

Many value investors are inclined to favor companies with minimal leverage since this reduces downside risks substantially in times of unexpected adversity.  Often, this means that a company will use far less leverage than one might consider “optimal” under favorable conditions.  A conservative capital structure can penalize results when all is well with the world, but also reduces the risk of disaster when times get tough.  A side benefit of a conservative capital structure is that a company can opportunistically use the balance sheet when very favorable conditions arise.

Based on an investor presentation given by Noble’s management, the company has been looking at Frontier as well as other opportunities for quite some time but decided to act now due to the distress caused by the impact of the Deepwater Horizon disaster on the industry as a whole.  Having very little debt and significant cash on hand allowed management to benefit from disruption in the industry rather than be a victim of it.

Many companies today are hoarding cash and this can destroy shareholder value if management does not have a proven track record of intelligent capital allocation.  Therefore, it is important to look at balance sheet strength and cash balances in light of what management has done in the past.  In the case of Noble, the track record of free cash deployment inspired some confidence that capital allocation would be intelligent going forward.

For more information on Noble Corporation as well as further details regarding the Frontier and Shell transactions, please refer to the following links: