he Obama Administration formally lifted the moratorium on deepwater oil exploration in the Gulf of Mexico earlier this month but the regulatory situation remains uncertain for companies that are attempting to operate in the region.  Despite the formal lifting of the moratorium, there are still many questions regarding the new permit process that will be put in place by the Bureau of Ocean Energy Management, Regulation, and Enforcement.  Among other measures, the BOEM is carefully examining blowout preventers (BOPs) on drilling rigs as part of the permit process.

Companies operating in the contract drilling industry are at the center of attention as the new permit process proceeds.  In the midst of this environment, companies such as Noble Corporation are in the process of re-certifying BOP systems along with undergoing related inspections.  This has created downtime for many rigs and hurt contract drilling revenue.  We can clearly see the stress created by the moratorium and the Deepwater Horizon disaster when examining Noble’s third quarter results which were released yesterday.

The weakness in third quarter results are due to a combination of lower utilization and significantly lower dayrates for the fleet.  Overall rig utilization was 79 percent and the average dayrate was $126,581 for the quarter.  An examination of quarterly results since Q1 2008 reveals the negative trends that have impacted recent results.  The exhibit below presents selected data over the past eleven quarters (click on the image for a larger view): 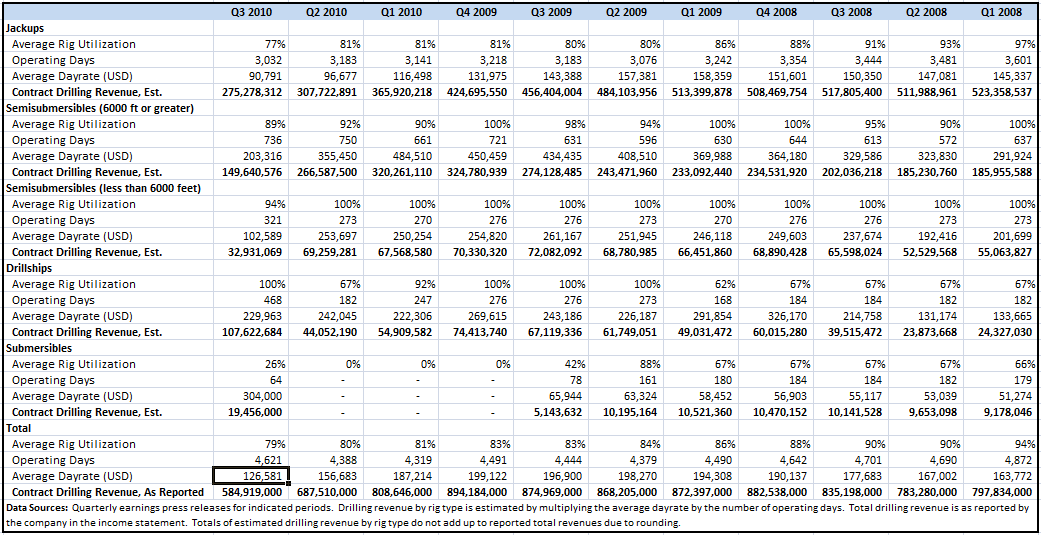 Average dayrates fell due to overall weakness in the market for rigs but also due to the negotiation of “standby” rates that Noble entered into with customers in the Gulf of Mexico that were prohibited from exploration activities due to the moratorium.  For example, the Noble Clyde Boudreaux has been on a standby dayrate of $145,000 which is down from dayrates in the $400,000 range that the rig would normally be able to command.  In addition, the Noble Amos Runner produced no revenue during the quarter due to a dispute with Anadarko over whether the moratorium qualified for the force majeure provision that would nullify the contract.

The Worst May Have Passed

Although the situation in the Gulf of Mexico is still very uncertain, there are reasons to believe that conditions will improve for Noble in the current quarter.  It appears that the company is making good progress recertifying the BOPs for rigs operating in the Gulf of Mexico which is consistent with prior statements from management regarding the process for complying with anticipated regulations.  The Noble Danny Adkins and Noble Amos Runner rigs have already received BOP certification and are earning full dayrates.

We have attempted to put together a rough estimate for 4th quarter contract drilling revenues (file available in the resource section at the end of the article) based on the most recent fleet status report along with information found in Noble’s Q3 earnings release.  While the forecast can only be considered an educated guess, it appears reasonable to expect contract drilling revenues to rise to around $630 million for the current quarter.  Additional improvements should occur in 2011 since the Noble Clyde Boudreaux, Noble Jim Thompson, and Noble Driller should be earning full dayrates by the end of the year.

Despite the headwinds Noble has encountered so far in 2010, the company was still able to generate $1.3 billion of operating cash flow over the first nine months of the year, of which $886 million was invested in capital expenditures with the vast majority on new construction or improvements to existing rigs.  In addition, the Frontier acquisition along with the related agreement with Shell has provided Noble with a total of $14 billion of contracted backlog.  Even after the Frontier acquisition, Noble’s long term debt is a manageable 27 percent of overall capitalization.

The Gulf of Mexico remains an important market for Noble and more clarity on future regulations will be needed before more normal levels of activity in deepwater exploration resumes.  It was interesting to note that Noble management, in response to a question during the conference call, left open the possibility that a surge of activity might occur in the Gulf of Mexico once regulatory certainty exists as explorers attempt to fully exploit leases that may soon expire.  While such a surge of activity is by no means a certainty, it would be a good step in the direction of achieving more normal dayrates and favorable contract terms.