In a long awaited announcement, Berkshire Hathaway has named an investment manager to handle a “significant portion” of the company’s investment portfolio.  In a press release (pdf) issued today, Berkshire announced the appointment of Todd Combs and included a quote from Warren Buffett:

Warren E. Buffett, Berkshire’s CEO, commented “For three years Charlie Munger and I have been looking for someone of Todd’s caliber to handle a significant portion of Berkshire’s investment portfolio. We are delighted that Todd will be joining us.”

Mr. Combs has been managing Castle Point Capital, a Greenwich, Connecticut based hedge fund, for the past five years.  At this point, not much information appears to be available regarding Mr. Combs or his hedge fund.  However, we can gain some insights into his investment style based on Castle Point Capital’s latest 13-F report filed with the Securities and Exchange Commission listing his reported positions as of June 30, 2010.

The exhibit below shows the positions in the 13-F report sorted by market value with the largest positions appearing at the top.  The value of all positions was $279.7 million. 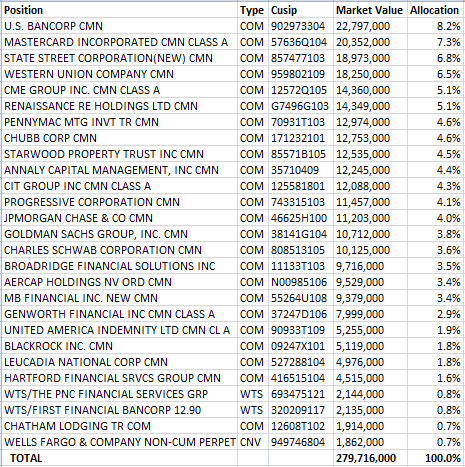 From the list, it appears that Mr. Combs favors financial companies with U.S. Bancorp, MasterCard, State Street, Western Union, and CME Group making up the top five positions and accounting for over one third of the value of the fund as of June 30.  In fact, the list is made up almost entirely of financial companies.  However, we caution readers to not necessarily consider the 13-F data to be the definitive listing of all positions particularly because holdings traded on foreign exchanges are not included.

In July, Berkshire Hathaway Vice Chairman Charlie Munger stated that Li Lu would have a role at Berkshire in the future.  The fact that Mr. Combs was hired by Berkshire does not mean that Li Lu is no longer being considered because Warren Buffett has stated that Berkshire will hire more than one investment manager to handle a portion of the company’s portfolio.  One possible reason for naming an individual at this point could be Lou Simpson’s upcoming retirement from GEICO at the end of the year.  Mr. Simpson has long been the only executive at Berkshire other than Warren Buffett with authority to make investment decisions.

Mr. Buffett first disclosed his plans to name investment managers in his 2006 letter to shareholders (pdf).  Here is an excerpt from the letter regarding his criteria for picking a manager:

Picking the right person(s) will not be an easy task. It’s not hard, of course, to find smart people, among them individuals who have impressive investment records. But there is far more to successful longterm investing than brains and performance that has recently been good.

Over time, markets will do extraordinary, even bizarre, things. A single, big mistake could wipe out a long string of successes. We therefore need someone genetically programmed to recognize and avoid serious risks, including those never before encountered. Certain perils that lurk in investment strategies cannot be spotted by use of the models commonly employed today by financial institutions.

Temperament is also important. Independent thinking, emotional stability, and a keen understanding of both human and institutional behavior is vital to long-term investment success. I’ve seen a lot of very smart people who have lacked these virtues.

Finally, we have a special problem to consider: our ability to keep the person we hire. Being able to list Berkshire on a resume would materially enhance the marketability of an investment manager. We will need, therefore, to be sure we can retain our choice, even though he or she could leave and make much more money elsewhere.

Since Mr. Combs is only 39 years old, he clearly has the potential to make a long term impact at Berkshire Hathaway.  We look forward to learning more about Mr. Combs in the coming weeks as his record will surely come under much greater scrutiny and more information should emerge regarding his investment style.  It will be particularly interesting to see how Castle Point Capital performed during the 2008-2009 bear market.

Today’s announcement is most likely unrelated to the question of who will succeed Warren Buffett as Chief Executive Officer.  We have speculated in the past that David Sokol is the lead candidate for CEO and today’s announcement does not change that view.  Mr. Buffett has stated on several occasions that the next CEO of Berkshire will have the investment managers reporting to him.

Update #2: According to The Wall Street Journal, Li Lu has taken himself out of the running for a job at Berkshire.