Noble Corporation Chairman and CEO David Williams believes that uncertainty in the Gulf of Mexico will continue to impact the offshore drilling industry for some time to come.  Mr. Williams, speaking today at the Barclays Capital Energy and Power Conference in New York, updated investors regarding the company’s operations and future prospects in light of continued regulatory uncertainty in the Gulf of Mexico in the aftermath of the Deepwater Horizon disaster involving the blow out of the Macondo well.

We have provided coverage of Noble Corporation over the past few months and believe that the company is well positioned despite Gulf of Mexico uncertainty.  The company has proven adept at seizing opportunities when they arise as illustrated by the acquisition of Frontier Drilling earlier this summer.  The acquisition added six floating drilling rigs along with $2.0 billion of contract backlog (net to Noble) and was financed with debt obtained at an attractive interest rate made possible by the company’s relatively unleveraged balance sheet.  The company has a modern fleet of rigs and has indicated in the past that the costs of retrofitting rigs for new regulations should be manageable.  Since our initial write up, Noble shares have rallied with increased exposure in publications like Barron’s, but shares are still trading at prices far lower than before the Deepwater Horizon incident.

One of the more interesting aspects of the presentation involved an assessment of a “new normal” for the Gulf of Mexico in a post-Macondo world.  The slide below considers three scenarios that could develop in the coming months and the consequences for the industry based on each scenario (click on the image for a larger view): 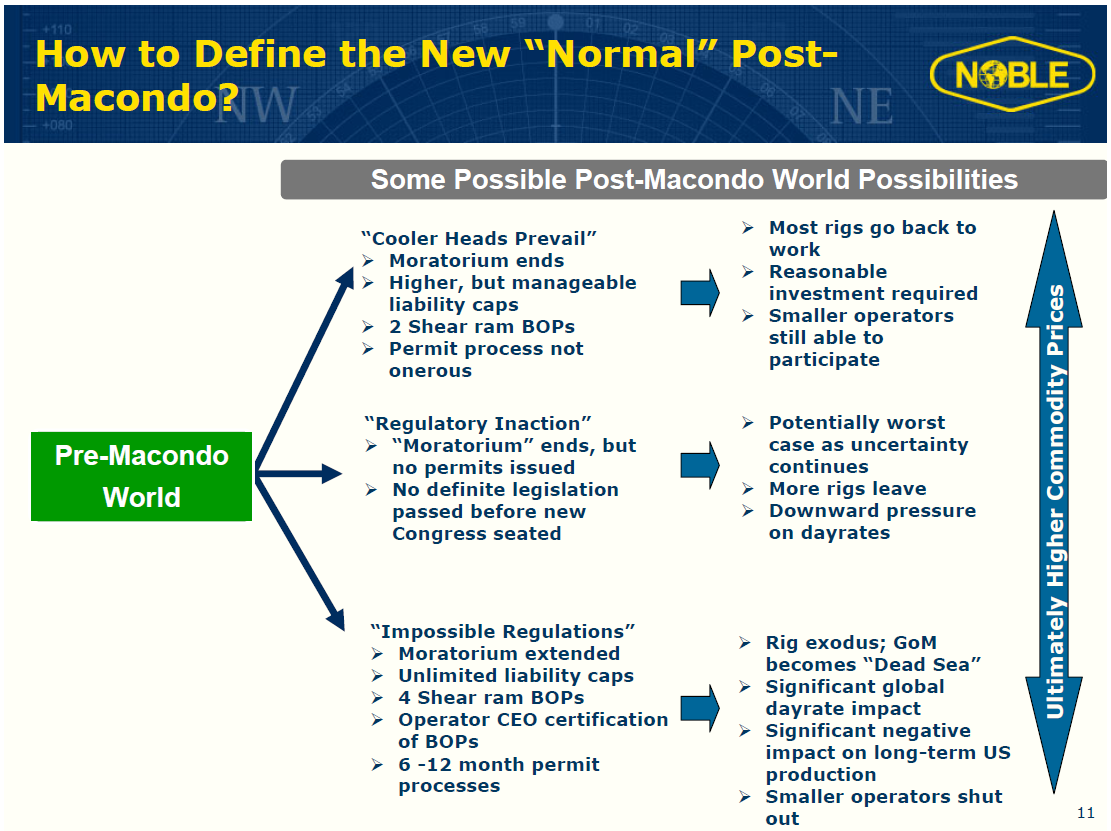 While Mr. Williams did not make a specific prediction regarding which scenario is most likely to play out, he did indicate that an end of the official moratorium is likely to come before the elections but a de-facto moratorium could continue if the federal government refuses to issue permits.  This would most closely align with the middle scenario entitled “regulatory inaction” which could lead to more uncertainty, an exodus of rigs from the Gulf of Mexico, and downward pressure on dayrates.  In the highly charged political environment in Washington today, one cannot discount the possibility of the “impossible regulations” scenario which would effectively destroy the economics of oil and gas exploration in the Gulf of Mexico and devastate the regional economy.

Mr. Williams noted that a growing percentage of oil and gas discoveries in the Gulf of Mexico have been in deep waters in recent years and stressed the fact that decline rates are higher in the Gulf than in other parts of the world.  In other words, an extended moratorium will have a major impact on production, particularly for deepwater where the typical decline rate is between 20 and 25 percent.

Mr. Williams provided updates on the following rigs which we have combined with an analysis of the company’s latest fleet status report from July.

Mr. Williams estimated realization of $7.1 billion of net cash (undiscounted) from the current $13.2 billion backlog based on a 53.5 percent operating margin.  Noble’s margins continue to exceed comparable margins of competing offshore contract drillers but Mr. Williams noted that increased regulatory burdens could impact margins for all companies in the industry.

In response to a question, Mr. Williams reiterated Noble’s focus on growth but also kept open the possibility of increasing dividends in the future.