Hewlett-Packard is facing sharp criticism from one of its rivals regarding the company’s strategy for investing in research and development.  In a very candid interview with The Wall Street Journal, IBM Chief Executive Samuel Palmisano claimed that HP has little choice but to spend significant sums on acquisitions because former CEO Mark Hurd “cut out all the research and development.”  Mr. Palmisano also criticized HP’s Board of Directors for providing Mr. Hurd  with a generous severance package saying that this was not a good use of shareholder money.

While criticism from a rival should usually be taken with a grain of salt, Mr. Palmisano appears to have a point regarding overall trends in HP’s commitment to R&D in recent years.  From a brief examination of the data over the past decade it is clear that the company has cut R&D spending significantly and it is very possible that this has interfered with the ability of HP engineers to develop products in-house that are now being purchased at steep price tags through acquisitions.  We have been critical of HP’s acquisitions of 3Par and ArcSight based on the high valuations being paid.  Could more R&D spending have allowed HP’s internal resources to develop such technology in-house?

In an attempt to come up with some answers regarding the validity of Mr. Palmisano’s comments, we took a “thirty thousand foot” view of HP’s R&D spending track record over the past decade by examining basic data contained in recent 10-K reports.  This article is by no means a comprehensive analysis of HP or an analysis of how the R&D funds were actually used.  Obviously, raw numbers for spending on R&D are not the entire story since funds can be deployed poorly or efficiently.  For now, this is beyond the scope of our analysis.

The exhibit below contains data extracted from recent 10-K filings.  A revenue breakdown is presented along with statistics on R&D spending.  Since HP’s revenue mix has changed in recent years, particularly since the acquisition of EDS in late fiscal year 2008, we calculate R&D spending both as a percentage of total net revenues and as a percentage of product revenues.  Click on the image for a larger view. 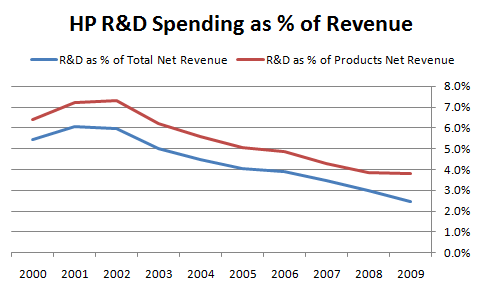 The chart visually demonstrates that HP has dramatically cut R&D spending as a percentage of both total and product revenues over the past decade.  This trend has continued with further declines in the first nine months of fiscal 2010.  HP was spending over 7 percent of product revenues on R&D in the early years of the last decade.  This has fallen by more than half to 3.5 percent for the first nine months of fiscal 2010.

Short Term Profit Boost … But at What Long Term Cost?

Just as skipping a couple of oil changes will not immediately destroy your car’s engine, cutting R&D spending will not have an immediate impact on a company’s technological position.  In fact, skimping on R&D can boost reported profitability in the early years of such cutbacks since the company’s products will still be competitive and costs will be reduced.  Over time, however, technology companies that fail to invest in R&D will eventually face a decline.  In the case of HP, Mr. Palmisano is suggesting that the company is now paying the piper by being forced into expensive acquisitions made necessary by a lack of internal innovation.

We have not made a case one way or another regarding the efficiency of HP’s research and development program and there is no way to prove that the company could have developed technology in-house that would have made the 3Par and ArcSight acquisitions unnecessary.  However, it is quite clear that both Carly Fiorina and Mark Hurd presided over a gradual decline in HP’s commitment to R&D.  HP shareholders should be asking tough questions regarding the concerns Mr. Palmisano has raised.