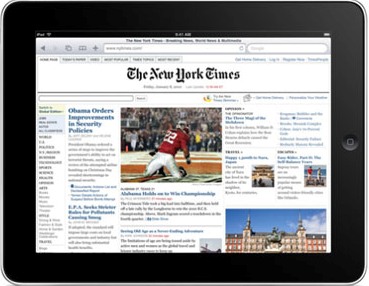 When Apple unveiled the iPad in late January, many observers speculated that Steve Jobs may be on the verge of delivering a device capable of saving newspapers from an inexorable decline.  It is difficult to visit an Apple Store to test the iPad without being impressed by the elegance of the device and the possibilities that exist for delivery of news.  The form factor of the iPad makes the experience vastly superior to reading news on a traditional computer.

Whether the iPad is superior to traditional print newspapers is ultimately a matter of personal preference.  Even for those who still prefer print, the fact that the iPad travels with the reader is certain to attract frequent travelers and those who have multiple residences.  Early risers who dislike waiting for carrier delivery may be persuaded to switch as well.

The main obstacle for mass adoption of the iPad is the very high price of the device, but competition will inevitably drive the price down.  Earlier this week, both Barnes and Noble and Amazon.com cut the price of their e-book readers to below the $200 price point.  This is clearly a response to the competitive pressure of the iPad which is a much more advanced device.  We may see entry level $99 e-readers on the market by the Christmas shopping season.

The chart below published by The Economist illustrates a dilemma facing the newspaper industry in the United States.  In 2008, 87 percent of revenues for the American newspaper industry came from advertisements.  Newspaper industries in the other countries cited by the OECD survey all had less dependence on advertising due to a greater share of revenues coming from subscriber fees.

The iPad will allow newspapers to deliver advertisements, but Apple is imposing tight control over advertising opportunities through applications specifically designed for the iPad.  Newspapers with a clear competitive advantage such as The Wall Street Journal and The Financial Times will be able to charge subscription fees, but it is doubtful that smaller regional papers will be able to replace lost print subscription fees with online revenue from subscribers.  At the same time, paid local classified ads are in a terminal decline due to free services such as Craigslist.

For more information on this topic, please read an interesting article from last week’s Economist regarding the future of newspapers throughout the world.