“If something cannot go on forever, it will stop.”

When it comes to financial markets, there is a major difference between observing a pricing anomaly and profiting from it.  In most cases, observing inefficient pricing involves significant subjective judgment calls.  Such is the case when one declares that Facebook common stock is “obviously overvalued” or that buying an insurance company trading at two-thirds of tangible book value is “clearly too cheap”.  In both cases, subsequent events could make such pronouncements appear foolish in retrospect. Despite the best efforts of legions of computer scientists, algorithms are of limited assistance in addressing this problem although value investing principles can help reduce errors or at least provide downside protection.

Nearly three years ago, we observed that the oil:natural gas ratio had reached what appeared to be rather extreme levels.  As we noted at the time, over the previous twenty-three year period, the average ratio was 10, the minimum ratio was 4.3, and the maximum ratio was 21.5.  At the time, the ratio stood near the record high levels and there was much talk about the potential for industry to substitute natural gas for other forms of energy.  The most obvious substitution effect we have seen over the past few years has been in electricity generation.  We again noted the apparent cheapness of natural gas in December 2010 and March 2011 making similar observations as the oil:natural gas ratio became more extreme.

It is not as if market participants have been oblivious to the opportunity provided by cheap natural gas.  The electricity generation industry has clearly absorbed some of the increased supply of natural gas in recent years.  Joy Global, a leading provider of equipment for the coal mining industry, noted this trend in its recent earnings release:

As noted, U.S. coal has experienced the most severe decline, driven primarily by lower electricity demand and electricity generators switching to natural gas. Electricity demand in the U.S. was down over 5 percent during the winter heating season, which is greater than the 4 percent decline in 2009 that resulted from the global recession. On top of slowing demand, shale gas production has been expanding rapidly and creating a significant surplus of natural gas in the U.S. This has depressed natural gas prices to 10-year lows and also has increased the dispatch of gas fired generation onto the electricity grid. As a result, coal’s share of electricity generation has dropped from 43 percent to 32 percent between 2006 and April of 2012 while the natural gas share increased from 18 percent to 32 percent over the same period.  [Emphasis added]

Clearly, price signals are having a major impact at least in one very important industry.  However, this incremental demand has not resulted in any observable improvement in the price of natural gas in recent years nor has it done anything to normalize the oil:natural gas ratio.  A full discussion of the supply/demand dynamics of the industry is beyond the scope of this article but we can recommend The Economist’s recent Survey on Natural Gas for readers seeking more in-depth information.

We were careful to point out in previous articles that just because the oil:natural gas ratio appeared to be extreme, one must not conclude that it will not reach new extremes.  This is precisely what has happened over the last year with the ratio spiking to 53.8 in late April 2012.  After subsequently falling to below 30, the ratio has recently resumed climbing and now stands at approximately 37.  The chart below shows the movements in the ratio since 2008: 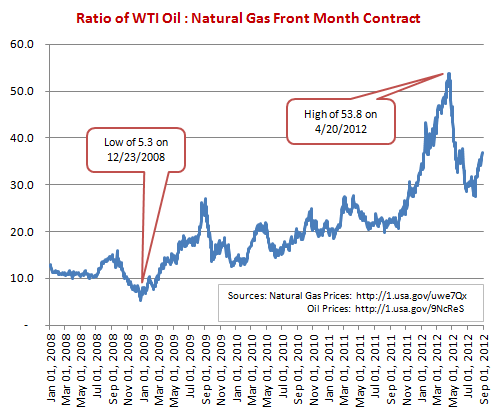 Another way of looking at the same data is to compare the cost of a barrel of crude oil to the energy equivalent quantity of six mcf of natural gas.  The following chart clearly shows that natural gas is extremely cheap in absolute terms.  For approximately $15, one can purchase six mcf of natural gas containing the energy equivalent of a barrel of crude oil which now sells for nearly $100.  Obviously, natural gas and oil are not perfect substitutes but this type of price discrepancy should induce any industry capable of switching to at least give the idea very serious consideration. 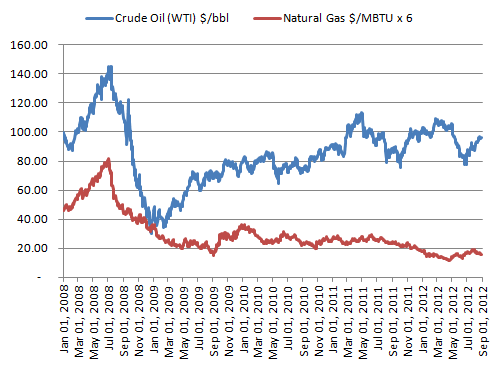 It is clear that observed anomalies in commodity pricing can persist for very long periods of time and there is no accurate way to forecast when prices will normalize.  There is no shortage of articles attempting to predict when natural gas prices will rise.  A recent Barron’s article suggests that crude oil production will need to drop in order to curtail natural gas that is obtained as a byproduct of crude production.  There are many other theories regarding the conditions needed for price normalization.

As Benjamin Graham observed, there is nothing illegal or immoral about speculation and those who wish to dabble in natural gas and oil futures can feel free to do so.  This, however, does not meet our definition of an intelligent investment. To qualify as an intelligent investment, we would have to be sure that a natural gas producer has a low cost of production, a good record of success in exploration, and a capital structure that will allow common shareholders to benefit from a normalization in prices even if that normalization takes much longer than anyone currently anticipates.

Disclosure:  Individuals associated with The Rational Walk LLC own shares in companies engaged in natural gas exploration and production.

Natural Gas Remains Depressed With No End in Sight

Tagged on: Oil and Natural Gas