Volatility in the markets for various forms of energy is nothing new.  Prices react to a variety of factors including the weather, political and economic developments, and speculation.  While short term prices of individual commodities can be influenced by any of these factors, it is interesting to look at commodity prices relative to other similar commodities.  One measure that is often examined is the relative price of natural gas compared to crude oil.

One barrel of crude oil has approximately six times the energy content of one thousand cubic feet (mcf) of natural gas.  However, for a variety of reasons, the pricing relationship between oil and natural gas is almost never exactly six to one.  Oil is a global commodity while natural gas is generally considered a commodity that is more influenced by local production and consumption trends.  However, as we pointed out last October, natural gas can sometimes serve as a substitute for oil so one would expect that cheap natural gas would generate long term substitution.

The chart below shows the ratio of one barrel of West Texas Intermediate crude oil to one mcf of natural gas since January 2008.  In our previous article on natural gas, we provide a longer term view of the ratio. 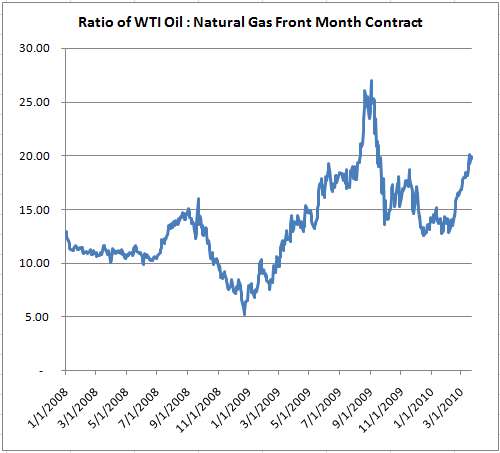 The current spike in the ratio has been caused by crude oil prices sustaining a move above the $80 per barrel level while natural gas prices have collapsed due to the arrival of warmer weather, reports of plentiful inventories, and continued high expectations for increased productions from unconventional domestic sources such as shale extraction.

Earlier this week, Contango Oil & Gas Chairman and CEO Kenneth R. Peak gave a presentation at an industry event in New Orleans and reiterated his belief that the industry generally needs approximately $6 gas in order to generate a relatively modest rate of return.  In addition, Mr. Peak believes that the industry may be drilling its way to $2 to $4 gas.

Shale gas is far more expensive to extract compared to conventional sources.  Despite the higher costs, shale has received considerable attention particularly in the months since Exxon announced plans to acquire XTO Energy.  In the short run, it appears that the increased production of natural gas is likely to continue depressing the price of the fuel relative to crude oil.  However, it is difficult to see a scenario in which the ratio of a barrel of crude to one mcf of natural gas can remain at 20 or above.  In the past, prices of natural gas and oil have adjusted to result in a ratio that is more normally between 10 to 15.

This may present an interesting arbitrage opportunity for those inclined to pursue such strategies.  However, identifying low cost producers of natural gas that can continue to generate profits even at low natural gas prices seems like a more conservative strategy.  Reviewing the rest of Mr. Peak’s presentation indicates that Contango clearly falls into the category of low cost producer.  Putting aside Contango’s interesting venture into gold mining (which may yet prove to be profitable, albeit unrelated to the company’s core competency), the company has pursued a disciplined capital allocation strategy over the years.