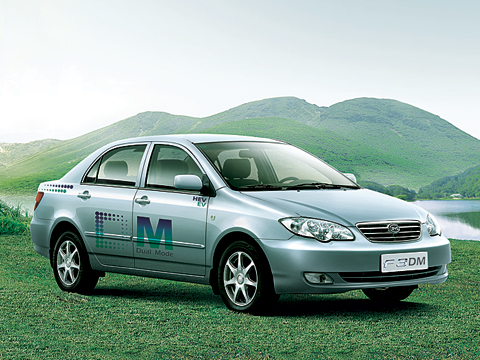 BYD has announced the availability of its F3DM dual-mode electric vehicle to individual buyers in China starting on March 29.  The first sales location will be in Shenzhen.  The city plans to have 24,000 dual mode hybrids on the road by 2012 increasing to 100,000 vehicles by 2015.  BYD introduced the dual mode hybrid at the end of 2008 but up to this point has only offered the vehicle to government entities, banks, and other institutions.

The F3DM is based on the BYD F3 compact car platform which is one of the top selling vehicles in China.  The vehicle is very similar in appearance to the Toyota Corolla.  With the F3DM model, BYD has created the first mass produced plug-in hybrid which includes a small 2.4 liter gasoline engine along with an electric motor capable of providing an all-electric range of approximately 100km.  The electric motor draws power from a new generation Fe battery.

Plug in hybrid vehicles are more likely to appeal to consumers than pure electric vehicles such as the BYD e6.  While the e6 model claims to have a range of 330km, or 205 miles, the battery must be charged to proceed further.  Plug in hybrids offer greater flexibility for consumers concerned about range and flexibility given current refueling options.

BYD will offer the F3DM for 149,800 yuan, or slightly less than US $22,000.  In comparison, the F3 sells for roughly half of the cost of the F3DM.  This is quite a premium and it is unlikely that consumers in China will be motivated to make the purchase without large government subsidies.  The city of Shenzhen may have to offer large subsidies to attract buyers.

The Rational Walk has covered BYD in a series of articles over the past year.  For a list of the articles, please click on this link.