One of the interesting effects of the turmoil in financial markets since September involves the level of implied inflation expectations embedded within the market prices for Treasury Notes and Bonds.  This is a very interesting development given the Federal Reserve’s accommodative monetary policy and the large deficit  financed spending plans proposed by the Obama Administration.

The United States Treasury issues traditional notes and bonds that are not inflation protected as well as inflation protected securities (TIPS).  Regular Treasuries pay interest in nominal terms while TIPS pay a real rate of return and principal is adjusted based on actual inflation.  Purchasers of TIPS are locking in a real return while those who buy regular Treasuries are locking in a nominal return and are accepting risk of inflation eroding their principal.

For most of the past five years, inflation expectations have hovered around a 2.5% trend line.  During this period, yields on both regular Treasuries and TIPS fluctuated widely but the spread between the two remained fairly constant.  The chart below shows the yields of the 10 year regular Treasury and TIP since January 2003: 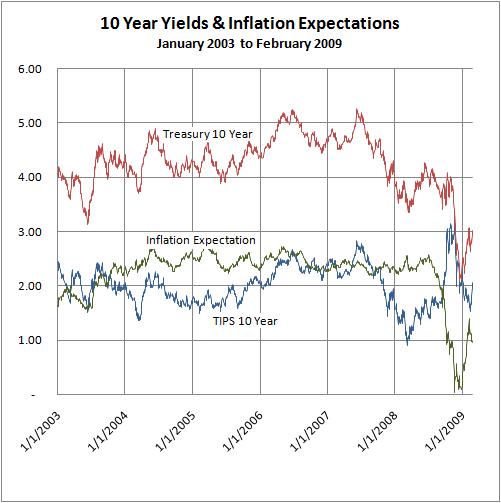 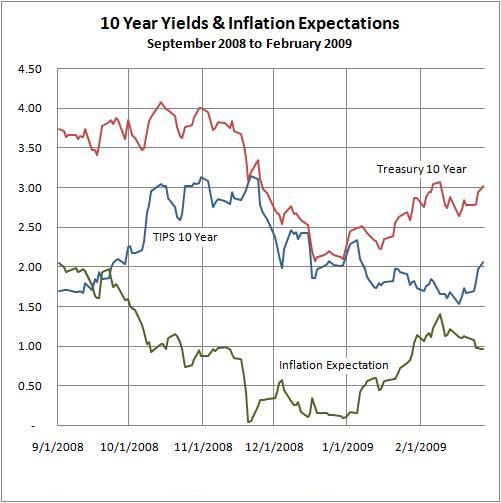 I do not base investment decisions on macroeconomic indicators alone and I am not forecasting any particular outcome when it comes to inflation or Treasury yields going forward.  However, it is notable that Warren Buffett recently warned of an “onslaught of inflation” in his annual letter to shareholders, which I wrote about last weekend.  It would appear that the market does not share this sentiment.  While inflation expectations have climbed back from zero to 1 percent recently, this is still far below the level of expectations of recent years at a time when the Federal Reserve has cut the Fed funds rate close to zero and the Obama Administration is forecasting huge deficits far into the future.

The message from the market is clear:  Expect a scenario in which severe recession and even a depression results in very low inflation or deflation.  Given the inflationary policies being pursued by the Fed and the Administration, deflation theories seem a bit far fetched to me.