During the worst of the financial crisis, investors were eager to obtain assets that promised total safety even if that meant giving up any prospect of positive after tax real returns.  In an environment where many were talking about a second Great Depression, inflation was the last risk many investors were thinking about.  This behavior caused inflation expectations, as measured by the difference between the ten year Treasury Note and ten year Treasury Inflation Protected Securities (TIPS), to approach zero.   For some additional background on inflation expectations and TIPS, please click on this link for a previous article covering the topic. 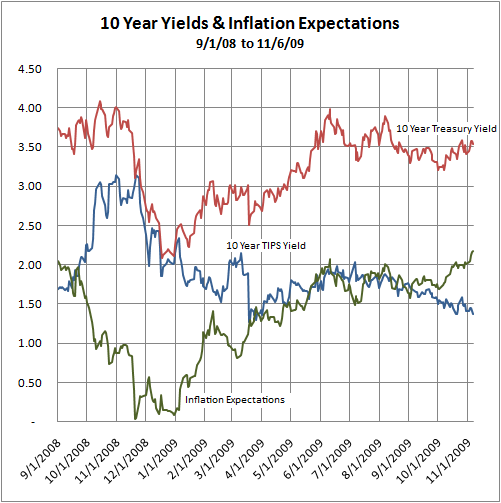 A combination of falling yields for ten year TIPS and rising yields for regular Treasury notes has combined to push up implied inflation expectations. Over the past several months, commodity prices have increased as well.  Most notably, the price of gold has surpassed $1,100 per ounce.

Some value investors, including David Einhorn of Greenlight Capital, have taken positions in gold as a hedge against inflation and a weaker dollar.  Here is an excerpt from a recent speech by Mr. Einhorn at the Value Investing Congress (click on this link for a pdf file of the full speech):

When I watch Chairman Bernanke, Secretary Geithner and Mr. Summers on TV, read speeches written by the Fed Governors, observe the “stimulus” black hole, and think about our short-termism and lack of fiscal discipline and political will, my instinct is to want to short the dollar. But then I look at the other major currencies. The Euro, the Yen, and the British Pound might be worse. So, I conclude that picking one these currencies is like choosing my favorite dental procedure. And I decide holding gold is better than holding cash, especially now, where both earn no yield.

Warren Buffett has made several comments recently warning about inflation including an article in August warning of excess “greenback emissions”.  Many observers believe that part of Mr. Buffett’s decision to acquire Burlington Northern Santa Fe may have been to hedge against higher inflation over the next several years.  Burlington Northern is a business that should have some pricing power in the event of inflationary conditions.

Very few investors have the ability to forecast macroeconomic trends with any level of accuracy.  Warren Buffett and many other value investors have previously advised investors worried about inflation to focus on selecting companies with defensible moats which are available at attractive prices.  What makes the current situation any different?

The level of monetary stimulus introduced by the Federal Reserve has been unprecedented.  In addition to conventional methods of easing monetary policy, the Federal Reserve’s balance sheet has ballooned due to purchases of Treasury securities (known as quantitative easing) along with hundreds of billions of dollars of mortgage related securities.  At the same time, fiscal policy is in disarray with record high post-war deficits and new entitlements related to health care under discussion.  Both parties are playing according to script:  Democrats refuse to consider lower spending (or even to not increase spending) and Republicans refuse to consider increasing any taxes.

The Federal Reserve claims that it will tighten policy prior to inflation gaining traction, but this would require both political fortitude and agility that the Fed has not been known for in the past.  Although few investors can forecast inflation rates with any precision, it seems logical to look at the current situation and take steps to mitigate the potential damage.

Inflation Expectations Are Creeping Up