When Warren Buffett decided to leave the bulk of his fortune to charity, he opted to leverage the existing infrastructure of the Bill and Melinda Gates Foundation rather than setting up his own foundation.  Taking such a step was quite a shock given the fact that many billionaires wish to create their own foundations that will carry on their name and legacy for generations to come.

However, another aspect of the 2006 pledge was more surprising and generated some concern for Berkshire shareholders:  Mr. Buffett planned to donate Berkshire Class B shares and specifically mandated that his annual gifts would have to be “fully additive” to the foundation’s minimum spending of 5 percent of assets.  The concern is that Gates Foundation selling would now account for a permanent source of supply of a relatively thinly traded stock resulting in potentially lower prices for other Berkshire shareholders who have decided to sell shares.

The mechanics of the gift were specified in Mr. Buffett’s letter (pdf) to the foundation in 2006.  500 million Class B shares (adjusted for 50:1 split in January 2010 ) would be earmarked for the Gates Foundation.  In July of each year starting in 2006, 5 percent of the remaining earmarked shares would be contributed to the foundation.  As a result, 25 million shares were donated in 2006, 23.75 million in 2007, and so on.  This year, approximately 20.4 million shares were donated based on the formula outlined in the letter.  The following exhibit shows the number of pledged shares along with the annual gift implied by the terms of Mr. Buffett’s letter:

While a portion of the donated shares would have to be liquidated to fund the additional spending mandated by the terms of the gift, Mr. Buffett clearly expected that the Gates Foundation would hold at least a portion of the shares.  In other words, while he mandated that the value of his gift must be additive to existing foundation spending, he never mandated that all of the Berkshire shares given each year must be liquidated in order to achieve that objective:

I regard Berkshire as an ideal asset to underpin the long-term well-being of a foundation. The company has a multitude of diversified and powerful streams of earnings, Gibraltar-like financial strength, and a deeply-imbedded culture of acting in the best interests of shareholders. Outstanding managers are available to succeed me. I expect Berkshire to become ever-stronger and more profitable as it makes new acquisitions and expands present businesses.

In fact, the Gates Foundation has accumulated a significant ownership interest in Berkshire over the years with a reported total of 90,643,501 shares held as of November 11, 2010 based on a recent SEC filing which accounts for 80 percent of the shares donated over the past five years. At a current market value of over $7 billion, Berkshire represents a large percentage of the foundation’s total assets which were reported to be nearly $29 billion at the end of 2009.

According to a recent SEC filing, the Gates Foundation has been liquidating Berkshire shares on a daily basis over the past two months.  Sales have been made on every trading day from September 13 to November 11, with an average of 40,206 shares sold per day.  However, these sales have been trivial as a percentage of overall trading volume accounting for an average of 0.8 percent of daily volume, and at no point exceeding 1.5 percent of daily volume, as shown by the chart below (Source for total volume data:  Google Finance): 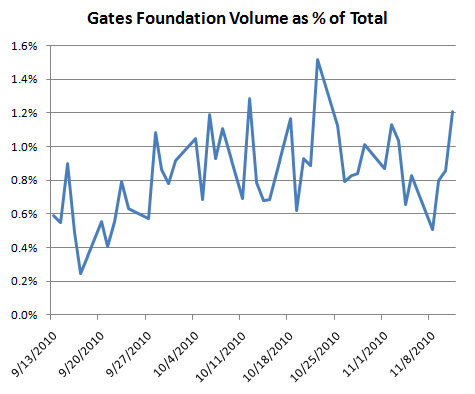 Overall volume of Berkshire Class B shares has increased significantly in 2010 compared to prior years due to a combination of the company’s inclusion in the S&P 500 and the 50:1 stock split that was required to facilitate the Burlington Northern Santa Fe acquisition earlier this year.  Based on Google Finance data, the median number of shares traded per day rose from 1.54 million in 2009 to 5.32 million in 2010 to date (we use median figures to eliminate distortion caused by extremely heavy volume around the time of the BNSF transaction).  Even at the volume that prevailed in 2009, Gates Foundation selling would have only a marginal impact.  Selling at the 40,000 share/day level we have seen over the past two months would have next to no impact at today’s higher average volumes.

Based on the evidence available, it is difficult to conclude that Gates Foundation selling has any material impact on the trading volume or price of Berkshire Hathaway Class B stock.  The fact that Bill Gates is on Berkshire’s Board of Directors may lead observers to wonder whether such sales are a signal of discomfort with Berkshire’s business prospects or valuation.  However, this seems unlikely given the number of shares retained by the Foundation and the small and regular share sales that have taken place.