The most successful individuals in any field of human endeavor are usually those who have adopted a lifestyle of constantly seeking additional wisdom.  In many cases, this wisdom involves keeping up with new advances in fields such as medicine, engineering, or other hard sciences directly relevant to an individual’s chosen profession.  Without efforts to remain up to date, a doctor or scientist will soon find that his skills have atrophied regardless of the initial level of formal education that was attained.

Professional investors who have adopted a value based approach are certainly not exempt from the need to constantly expand their horizons.  However, once a certain baseline of knowledge specific to value investing has been attained, the main goal does not involve constantly revisiting the fundamental analytical framework but attempting to expand our circles of competence so the analytical framework can be applied to a broader set of opportunities.  Perhaps even more importantly, we must seek to know our own personality and temperament and tailor our desired circle of competence and investment approach accordingly. 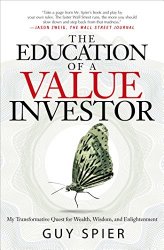 The Education of a Value Investor chronicles Guy Spier’s evolution from a self described “Gordon Gekko wannabe” to a highly accomplished fund manager who has found success through a constant effort of attaining worldly wisdom and seeking to understand his own personality more fully.  The core of the book is a very personal reflection of the author’s journey and is unsparing when it comes to self criticism.  In this way, the book is more of a memoir than a road map containing specific actionable investment ideas, although several valuable insights are provided which should improve any investor’s process.

From Gekko to Buffett

Mr. Spier graduated at the top of his class in economics at Oxford University and went on to earn an MBA from Harvard.  However, despite his top notch education, Mr. Spier found himself working at D. H. Blair, an investment bank with a very problematic culture that was fundamentally at odds with how he wished to conduct his professional life.

During this difficult period, Mr. Spier became more thoroughly acquainted with value investing by reading Benjamin Graham’s The Intelligent Investor and Roger Lowenstein’s Buffett:  The Making of an American Capitalist.  Heavily influenced by the manner in which Mr. Buffett has conducted his life, Mr. Spier made the decision to leave D. H. Blair and eventually founded Aquamarine Fund.  Through Aquamarine, Mr. Spier has posted results far in excess of the S&P 500 and is now a very well known investor.

Most successful fund managers who write a book typically devote an introductory chapter to their history and then use the book to provide an investment framework that they have found useful over the years.  Often times, such a book is mostly a marketing document used to attract new clients.  Mr. Spier takes a radically different approach and devotes the bulk of the book to continuing a remarkably honest account of his personal journey.  The fundamental premise behind much of the book is that an investor must understand himself well enough to structure his personal and professional life in a manner that allows for success.  Additionally, there is great value in being generous with others in ways where mutually beneficial associations naturally develop over time.

Perhaps the most important point in Mr. Spier’s journey was when he took the seemingly trivial step of writing a thank you note to Mohnish Pabrai after attending the annual meeting of Mr. Pabrai’s investment partnership.  This simple gesture of gratitude made without any intent of receiving something in return prompted a meaningful friendship and mutually beneficial collaboration over the years.  The most famous collaboration was when Mr. Spier and Mr. Pabrai pooled their resources to bid on Warren Buffett’s annual charity auction.  They won the auction on their second attempt and met Mr. Buffett for lunch in 2008.  Clearly, this lunch had a lasting impact on Mr. Spier and in many ways changed how he would respond to the financial crisis.

Readers will benefit from a number of insights provided in the book, particularly those related to the importance of one’s environment when it comes to investing success.  Following the lunch with Warren Buffett, Mr. Spier made the decision to leave the New York “vortex” and relocate his business and family to Switzerland.  By removing himself from an environment obsessed with short term results, Mr. Spier was able to better match his environment with his personality, thereby resulting in a setup more conducive to his brand of value investing.  Altering his environment extended well beyond simply choosing to move to a different city.  Everything from the location of his home and office to the setup of his computer monitor and the creation of a “distraction free” library where electronics are banned have contributed to a more productive environment.

This book is an account of one investor’s journey and obviously not all of Mr. Spier’s choices will match any particular reader’s personality.  The important point, however, is that we must all embark on a path of discovering the environment that best suits our own personalities and allows us to achieve the best results that we can.

Toward the end of the book, Mr. Spier shares a number of specific pieces of advice that should be helpful to many investors.  Some of the advice is hardly groundbreaking like the admonition to avoid checking stock prices constantly and avoid people who are blatantly trying to sell you something.  However, two of the suggestions are particularly thought provoking and worthy of consideration.

Meat and Vegetables Before Dessert

Mr. Spier urges investors to gather investment research in the proper order and suggests tacking the primary sources (10K, 10Q, and annual letters) before reading any secondary sources such as news articles or analyst reports.  This is important because our brains are wired to give more influence to information we read first, so it is important to read the most direct sources first.  While it is intellectually less demanding to read an analyst report or a news article than to delve into a 10K report, we should avoid reaching for dessert before consuming the basics.  While most seasoned investors would never allocate capital without reading primary sources, it is common to review news articles and other data prior to more primary sources.  Perhaps this should be avoided.

Many value investors are familiar with Robert Cialdini’s book Influence:  The Psychology of Persuasion due to its presence on reading lists recommended by Charlie Munger.  One of the principles discussed in the book is related to “commitment and consistency”.  When we publicly take a position on a topic, we create psychological impediments to changing our views even when facts might change in the future.  For example, if an investor recommends a stock in a speech or interview and then the facts change, it can be excruciating to have to alter one’s views to match reality.  Mr. Spier suggests that we avoid discussing current investments and provides an example of where doing so backfired for his fund.

This particular advice should be particularly relevant to any investor who also writes about his or her investments.  A good example can be taken from The Rational Walk’s series of articles on Contango Oil & Gas.  After taking a bullish stand on Contango in September 2012, we published an update in October 2012 which in retrospect appears to rationalize possible flaws in the original investment case.  By May 2013, it was increasingly clear that the outcome envisioned eight months earlier was not working out, which was discussed in a final article on the subject.  In retrospect, there is no doubt that the “commitment and consistency” principle played a role in the length of time required to overturn the investment thesis.  It is very likely that without a public discussion, this realization would have arrived much sooner (and less expensively).

Mr. Spier has provided a great service by delivering a remarkably candid and humble book that allows investors to potentially learn from his mistakes.  It is always better to learn vicariously through the mistakes of others when possible.  However, when it comes to the psychological pitfalls of investing, a certain baseline level of personal experience is most likely required before one can profit from the experiences of others.

It would be all too easy for a novice investor to read this book and arrogantly declare that there is no way he or she would fall into the same traps.  Only when one is humbled to a certain degree through one’s own errors is it normally possible to be open to learning from the mistakes of others.  The readers who will gain the most from this book are likely to be those who have made their own share of mistakes and seek to improve themselves going forward.

Book Review: The Education of a Value Investor