I love running Berkshire, and if enjoying life promotes longevity, Methuselah’s record is in jeopardy.

Berkshire Hathaway will soon reach an important milestone with the fiftieth anniversary of Warren Buffett’s control of the company.  Nearly forty percent of Mr. Buffett’s tenure at Berkshire has been accomplished as a senior citizen and he is clearly not ready to retire anytime soon.  However, Berkshire shareholders are faced with the fact that an 84 year old man has an life expectancy of approximately six years.  It is prudent to consider succession issues carefully.  Mr. Buffett has assured shareholders that the company is well prepared but how can shareholders be certain? 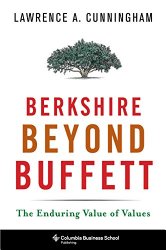 Warren Buffett almost certainly has higher name recognition in the United States today than all but a small number of public figures.  Even individuals who have no background in business and investing recognize Mr. Buffett’s name but what is interesting is that he is almost always characterized as an investor rather than as a manager.  In Berkshire Beyond Buffett, George Washington University Professor Lawrence Cunningham paints a compelling portrait of Berkshire’s culture that demonstrates how Mr. Buffett’s skills as a manager have been key to the company’s growth over the past two decades.

Berkshire Hathaway’s portfolio of common stocks attracts a great deal of attention, but the bulk of the value of the company has resided in wholly owned subsidiaries for quite some time.  Mr. Buffett has assembled a diverse group of businesses over the years and has characterized his management approach as delegating “almost to the point of abdication”.  While Mr. Buffett has involved himself in operating decisions in rare cases, his primary role is to allocate free cash flow generated by the non-insurance subsidiaries as well as “float” obtained from the insurance businesses.  Berkshire’s subsidiary managers have generally proven to be very capable with many of the original family owners continuing to run businesses even with no financial need to do so.

The Economist published a skeptical article on Berkshire earlier this year questioning how Mr. Buffett will “play his last hand”.  This article is useful in that it outlines many of the concerns skeptics typically point to when it comes to succession planning.  Specifically, it is alleged that Berkshire’s business model is simply not scalable or sustainable in the absence of the man who built the company.  Would a break-up of Berkshire create more long term value for shareholders after Mr. Buffett leaves the scene?

Professor Cunningham’s book is perhaps the most comprehensive examination of this question that has been published up to this point.  The book examines the origins of today’s Berkshire Hathaway and attempts to paint a picture of how Mr. Buffett has gone about building the conglomerate seemingly “by accident”.  Whether by accident or by design, over the years, Berkshire Hathaway developed a culture that ties together seemingly unrelated business units in a manner that makes Mr. Buffett’s extreme decentralization work.  Charlie Munger likes to describe the culture very succinctly as a “seamless web of deserved trust”, and Professor Cunningham’s work provides insight into how this web has developed and can be sustained.

The core of the book investigates how Mr. Buffett has balanced autonomy and authority through the examination of several Berkshire subsidiaries.  Professor Cunningham conducted numerous interviews with subsidiary CEOs as well as shareholders so the book is based on primary research and unprecedented access.  While some of the businesses have been analyzed in depth elsewhere in the past, the book also covers smaller subsidiaries that have received less attention such as the Pampered Chef.

One of the most interesting chapters goes into detail regarding the evolution of the Marmon Group, one of Berkshire’s wholly owned subsidiaries.  Marmon is a diversified conglomerate that was built by brothers Jay and Robert Pritzker. The company was considered too unwieldy and diverse to be successfully managed after the Pritzkers left the scene, but it turns out that little changed in terms of the company’s decentralized management approach.  John D. Nichols was CEO from 2002 to 2006 and Frank Ptak has been CEO since that time.  Both CEOs spent most of their careers at ITW, a diversified conglomerate with a structure similar to Marmon.  Mr. Nichols did introduce ten division presidents to logically group together Marmon’s subsidiaries but otherwise left the units mostly unchanged.

When Mr. Buffett leaves the scene at Berkshire, it is likely that the next CEO will need to create divisions since it would be very difficult to handle over eighty direct reports.  The Marmon model might offer a potential roadmap for how this can be accomplished in a manner that does not erode the operational autonomy that Berkshire has granted to subsidiaries.

Professor Cunningham concludes his book by conceding that some “slippage” is inevitable at Berkshire:

At Berkshire after Buffett, expect slippage.  Deals may not come Berkshire’s way. Offers Berkshire makes may not be on terms as agreeable as they have been.  Negotiations may be less favorable.  Getting through the screen may be a few more subpar businesses or disappointing managers.  If the big deals do not come or the great managers do not follow, returns will be lower.  But absent some extraordinary disruption, returns will not be so disappointing as to warrant dismembering Berkshire or some other radical change.  Its design for sustainability is more powerful than that.

Indeed, Berkshire Hathaway will not be the same after Warren Buffett leaves the scene.  But that is not really the question that needs to be answered.  The question really boils down to whether Mr. Buffett’s creation is worth preserving over time.  The litmus test is not going to be evaluated based on Berkshire’s stock price in the short run but based on growth of intrinsic value over many years and decades.  Logically, intelligent capital allocation across subsidiaries can remain extremely powerful even if the capital allocator in question is not Mr. Buffett.  If subsidiaries can continue to operate well in the future without significant oversight and capital allocation between subsidiaries remains intelligent, there is no reason for the model to fail anytime soon.   Professor Cunningham’s book provides ample evidence to believe that Berkshire’s business model should outlast Warren Buffett.