Berkshire’s Investment in BYD: A Bet on Wang Chuan-Fu

Berkshire Hathaway’s investment in BYD made its first appearance in Warren Buffett’s annual letter which provides a table listing common stock investments with a market value of more than $1 billion.  As of December 31, 2009, Berkshire held 225 million shares of BYD with a market value of nearly $2 billion.  Berkshire’s cost basis is $232 million.  While the investment has appreciated significantly, it is unusual for Warren Buffett to purchase shares of what is essentially a technology company in a very unsettled industry environment. 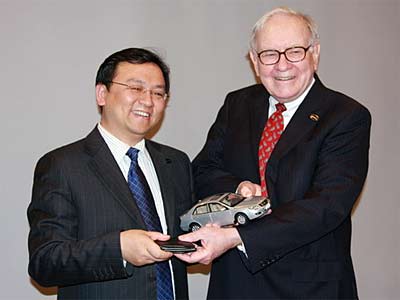 Columbia Business School students produce an excellent quarterly newsletter named Graham and Doddsville which is offered free of charge.  The Winter 2010 issue was recently released and contains details of a meeting between Warren Buffett and Columbia students where questions related to the BYD investment were discussed.  Mr. Buffett had high praise for BYD’s Founder Wang Chuan-Fu:

“BYD is a remarkable company run by a remarkable guy who started with $300,000 in 1995 and is now the second largest cell phone battery maker in the world. BYD also has the best-selling car in China on a monthly basis. [Mid- American Energy CEO] Sokol has never seen a better manufacturing operation than BYD. BYD makes everything except the tires and glass to maintain quality control.”

Not only does Mr. Buffett see Wang Chuan-Fu as a remarkable businessman, but also a man of integrity. “It took eleven months for the transaction to be approved. BYD could have backed out of the deal terms – the price had run up to HKD 40 from HKD 8 – but Wang Chuan-Fu did not. I don’t understand the product, so I am betting on the man.”

Mr. Buffett is not the only one at Berkshire who admires Wang Chuan-Fu’s track record.  Berkshire Hathaway Vice Chairman Charlie Munger performed most of the due diligence on BYD along with MidAmerican Energy Chairman David Sokol.  Mr. Munger is not known to offer praise casually, and had this to say about Wang Chuan-Fu in a 2009 Fortune Magazine article:

Wang Chuan-Fu is a man who believes in his product to the point where he is willing to drink BYD’s battery fluid to prove a point regarding environmental safety.

Big Challenges Ahead for BYD

There are some big challenges ahead for BYD as the company moves toward offering its all electric e6 vehicle in Western markets.  We have covered BYD extensively on The Rational Walk over the past year and have noted that the company seems to be hedging a bit more than previously regarding the timing of entry into the United States.  One potential side effect of the Toyota recall situation is that consumers may grow skeptical regarding product quality in general.  This could be particularly troubling for a new entrant from China since there is a perception that Chinese products can have quality problems.

BYD and Daimler recently announced a partnership to develop electric cars for the Chinese market.  The rationale for the alliance is that Daimler’s knowledge of electric vehicle architecture and BYD’s battery technology will be combined to provide a competitive advantage.  However, one other possible advantage is that the Daimler nameplate will bring additional credibility to a new class of all electric vehicles.  While there is no indication that any plans are underway to broaden the BYD/Daimler alliance, the fact that the two companies are working together is an interesting development.

Berkshire’s Investment in BYD: A Bet on Wang Chuan-Fu