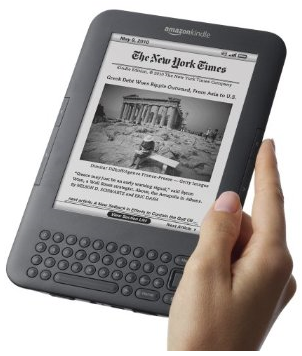 Rapid price deflation in the market for dedicated e-readers continued today as Amazon unveiled a new generation of its Kindle e-reader device.  While the new Kindle features better e-ink technology and is smaller than the version it replaces, the most notable change is yet another cut in price.  Amazon has introduced a Wi-Fi only device for $139 with the 3G wireless device remaining at $189.  This comes only weeks after Amazon cut the price of the current Kindle version from $259 to $189 and announced that e-book unit sales now exceed hardcover sales.

Priced as an iPad Accessory?

When one looks at the $139 price point for the Wi-Fi device, it appears that Amazon may have two goals in mind.  First, the company obviously feels the need to compete on price to retain existing market share within the dedicated e-reader market.  Competing products such as the Barnes & Noble Nook are now available for comparable prices.  Second, Amazon may be positioning the Kindle as an “accessory” for buyers of the higher end multi-function iPad device.

Apple’s iPad has received very positive reviews but suffers from the fact that it uses a back lit screen rather than e-ink technology.  This makes it very difficult to use the device in sunlight which is a problem for people who like to read on the beach or next to the pool.  The Kindle and other e-ink devices can be used in open sunlight without any difficulty.  But what if iPad owners  could have a simple “accessory” that allows them to read e-books at the beach while continuing to benefit from the iPad indoors?

It’s All About e-Book Sales

Amazon may have made a calculated bet to bolster its market share for e-books by pricing the Kindle at a level where the typical iPad owner will not hesitate to spend $139 for the occasions when reading in sunlight is necessary.  Amazon provides free apps for the iPad and iPhone that allow customers who purchase e-books through its Kindle store to read the material on the iPad.  By doing so, Amazon has been able to retain many iPad users as customers who may have otherwise defected to Apple’s iPad bookstore.

Pricing for the Kindle has not quite reached the level of the classic razor/razor blade business model where the idea is to price the device at a very low level in order to benefit from repeat sales of consumable items.  However, Amazon’s profit margins for the Kindle have certainly been compressed due to the pricing strategy it has adopted.  Since the company is not willing to provide detailed sales and profit information for the Kindle, we are unable to know for certain what the effect has been so far.  However, it seems clear that Amazon is making a bet on remaining the leader in e-book sales and may be forced to breach the key $100 price point in the near future.

Disclosure:  No position in Amazon or Apple.