Despite rapid advances in automobile technology in recent decades, the manner in which manufacturers distribute their products to the end customer has remained relatively unchanged for nearly one hundred years.  New vehicles in the United States are almost exclusively distributed through a vast network of franchised dealerships.  According to the National Automobile Dealers Association, there were 16,545 new car dealerships operating in the United States in 2015.  These dealerships registered total sales of $862.7 billion and generated $63 billion in payroll.  Nearly 1.1 million people were directly employed by dealerships with an additional 1.2 million jobs supported indirectly.

Automobile distribution is clearly very important to the overall economy and many dealerships are an important source of jobs in local communities.  Over the years, most states have put in place regulations that attempt to protect franchised dealerships from potential competition with manufacturers wishing to sell directly to consumers. For the most part, this was not particularly controversial in the past because all major manufacturers thought it in their best interests to use a franchised distribution model.

The automobile market is currently going through a period of rapid change that threatens to upend the familiar business models that have long characterized the industry.  Telsa Motors, under the leadership of its charismatic founder Elon Musk, has introduced a line of luxury electric vehicles with ranges in excess of 200 miles.  Tesla vehicles also have autonomous features that, while currently controversial, hold the promise of eventual full automation in the coming years.  In addition to all of this, Tesla has put in place a direct sales model that is quite different from the traditional franchised dealership model.  Customers visit a Tesla run “gallery” where one can view vehicles in a no-pressure environment because salespeople are not paid on commission.  The customer then orders a vehicle directly from Tesla for delivery at a later date, sometimes several months in the future.

Development of the Franchised Dealership Model 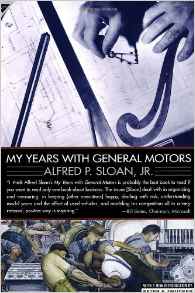 Alfred P. Sloan joined General Motors in 1918 at a time when the company was in turmoil and its future was in no way secure.  Under his leadership over the next four decades, General Motors grew into the dominant manufacturer of automobiles in the United States.  In My Years with General Motors, published in 1963, Mr. Sloan describes the history of General Motors and the overall automobile market from its infancy to a very mature industry.  The structure of the industry has been buffeted by foreign competition and new technology in the years since Mr. Sloan left the scene.  However, many aspects of the industry that he describes are familiar to modern readers.  We still have the annual model year change that usually goes along with periodic styling changes and is a key component of inducing customers to trade in for new models.  Additionally, the distribution model, and the logic behind it, has remained relatively unchanged.

Mr. Sloan believed that a stable dealer organization is a necessary condition for the ongoing prosperity of a manufacturer.  He noted that the automobile is not a typical “off the shelf” product that consumers buy every day.  It represents a highly complex and expensive “investment” that the buyer expects to operate on a frequent basis without personal knowledge of the mechanical complexity.  Especially in the early days of the automobile, frequent service was a necessity and only a local network of skilled technicians employed by dealers could provide it.

The franchised dealer and the manufacturer are essentially “partners” that have taken on different roles and assumed different levels of investment:

Ultimately, any lasting business relationship has to be a “win-win” in terms of being mutually beneficial.  In response to difficulties in the dealer network in the 1920s, Mr. Sloan made it a practice to make personal visits to dealers.  Traveling in a private railroad car, he and several associates went to nearly every city in the United States and visited five to ten dealers a day.

“I made careful notes of all the points that came up, and when I got back home I studied them.  I did this because I realized that, irrespective of how efficient our regular organization might be, there is a special value in personal contact, and furthermore, as chief executive officer of the corporation, my interest was primarily in general policies.  This time-and-effort-consuming approach to the problem was particularly effective under the circumstances existing at that time, when we knew so little about the facts of distribution in the field.  Many things that we learned were subsequently reflected in our dealer selling agreements, and communications in particular were put on an established basis through councils and in other ways which at least in part served to meet the same need.”

There were a number of problems that General Motors faced in subsequent years that required modifying the relationship with the dealers.  In particular, there were issues that had to be dealt with in terms of ensuring that dealerships had adequate capital to carry necessary inventory.  There were also challenges related to assisting dealers with liquidation of an old model in order to make room for new models while keeping inventory losses as low as possible.  These are problems that still impact dealerships today and the reason behind periodic clearances and sales incentives designed to move prior year models in a timely manner.  The sharing of responsibility between the franchised dealer and the manufacturer is a question that still faces industry players today.

Was a Direct Sales Model Possible?

The main alternative to a franchised dealership model is for manufacturers to directly sell vehicles to the end customer.  Why was this option not pursued in the early days of the automobile industry?

“The question might arise why the automobile industry adopted this form of distribution [franchised dealerships].  The answer, I think, in part is that automobile manufacturers could not without great difficulty have undertaken to merchandise their own product.  When the used car came into the picture in a big way in the 1920s as a trade-in on a new car, the merchandising of automobiles became more a trading proposition than an ordinary selling proposition.  Organizing and supervising the necessary thousands of complex trading institutions would have been difficult for the manufacturer;  trading is a knack not easy to fit into the conventional type of a managerially controlled scheme of organization.  So the retail automobile business grew up with the franchised-dealer type of organization.”

To a large degree, the function of a dealership today is similar to what Mr. Sloan described as being the case in the 1920s.  A customer will show up with his or her current vehicle and use it as a trade-in for a new model.  The function of the dealership is to negotiate with the customer on the terms of the trade in, usually in conjunction with the terms of sale for the new model.  Of course, this is the type of negotiation that is fraught with stress and can be quite opaque in many ways for the customer.

In contrast with the 1920s, customers today have access to a wide array of pricing information and are much more aware of the value of their trade in as well as the going price for new models.  Customers also have many more options for selling their existing vehicle privately than they did even a couple of decades ago.  The internet, of course, has changed the situation dramatically both in terms of provision of pricing information and the ease of which sellers and buyers can get together directly.  This has clearly reduced, but not eliminated entirely, the advantage of a dealer when it comes to liquidating a used vehicle in order to facilitate a new vehicle sale.

One aspect of My Years with General Motors that modern readers will no doubt take away from the book is that the underlying principles described by Mr. Sloan are timeless and he recognizes that change is a constant that future executives would have to deal with.  Ultimately, the goal of a distribution network is to best serve the end customer.  This can change over time:

“The achievement of our two goals in distribution – namely, the economic movement of the product, and a stable network of franchised dealers who move the product – has taken much thought and work over many years, for the problems are complicated, they change to some extent with changing circumstances, and the solutions have not always immediately presented themselves.  Policies and practices that were satisfactory at one time may not be best suited to later conditions.  A “new model”, so to speak, in dealer relations may be needed from time to time.”

Industry observers today must evaluate the degree to which technology has the potential to upend the century-old franchised dealership model.  From an information asymmetry standpoint, dealerships have lost much of their historical advantage because pricing information for both new and used vehicles has become much more transparent.  The internet also has allowed manufacturers to have a direct relationship with end customers, as Tesla has shown with their direct sales model.

What has not changed is the fact that automobiles are very complex and expensive purchases that require maintenance.  Customer satisfaction depends on ensuring that maintenance and support is available long after the initial sale.  Although electric vehicles are less complex in some ways than gasoline powered vehicles, they are effectively complicated computers on wheels.  Some aspects of maintenance can now be handled through software updates provided through internet connections.  But clearly mechanical service is not obsolete.  Tesla obviously recognizes this and has built up a network of service centers.

We can often benefit from an understanding of history when looking at current controversies.  My Years with General Motors is a business classic and conveys much wisdom aside from the topic of automobile distribution discussed in this article.  However, Mr. Sloan’s observations on distribution are particularly interesting given Tesla’s current approach and the changing dynamics of the industry in general.

In 2015, Berkshire Hathaway acquired Van Tuyl Group, the largest privately-owned auto dealership group in the United States.  The group has been renamed as Berkshire Hathaway Automotive and now operates 81 dealerships with over 100 franchises in 10 states.  Obviously, Warren Buffett has made a significant bet on the continuation of the franchised dealership model that was developed by Alfred P. Sloan and his contemporaries nearly a century ago.  It will be interesting to see whether the significant technological disruption in the automobile industry causes a shift in the overall distribution model or whether the franchised dealer distribution model will endure for decades to come.