Over the past three decades, videogame distribution and target markets have changed dramatically.  In the 1980s, videogame arcades were extremely popular among teenagers and young adults but over time the popularity of home videogame consoles ruined the economics of arcades and broadened the target market significantly.  Newer videogame consoles have made the arcade games of the 1980s seem antiquated in comparison.  Now home console videogames may be facing the same future as arcades as online based games gain popularity.

A sustained shift to online gaming would have serious implications for manufacturers of consoles and computer based games.  According to The Wall Street Journal, videogame software sales fell 11 percent to $10.5 billion in 2009 and continued to decline in the first quarter of 2010.  At the same time, online social games such as Zynga’s very popular FarmVille game, have been rising rapidly.  FarmVille has attracted 78 million active monthly users who play the game on Facebook.  The game is surprisingly low tech in appearance and functionality, yet has captured the imagination of millions of users.

Zynga recently announced the private placement of preferred shares that imply a market valuation of $4 billion.  The company was founded in 2007 and claims to be profitable.  FarmVille is a free game but “virtual products” are sold online.  Users earn virtual currency from farming activities but can accelerate the development of their farms using “cash” purchased from Zynga.  This provides Zynga with a revenue stream.  According to The Wall Street Journal, industry-wide sales of such virtual goods is expected to rise to $2.1 billion in 2012 from an estimated $336 million in 2009.

While the idea of purchasing “virtual goods” may seem absurd, it is not that different from purchasing other forms of cheap entertainment such as a movie ticket.  Furthermore, the fact that the price of entry is free and the game has social aspects can lead to competition among players that can induce players to part with real cash in exchange for virtual currency.

The Wall Street Journal article cited previously highlights the problem for traditional videogame makers. While a social videogame like FarmVille may cost a firm like Zynga $500,000 to $1 million to develop, firms like Activision may spend more than $20 million to develop traditional console games that sell for $60 through retailers like GameStop.

Just like arcades did not disappear overnight when early consoles made home based play possible, online social games like FarmVille will not displace console games entirely and a transition will not occur overnight.  However, the addictive and competitive nature of cheap social videogames combined with increasing affordability of high bandwidth internet connections make the economics compelling and add a level of risk to the traditional gaming industry.  In Asia, online videogames are already extremely popular with games such as Ragnarok Online developed  and run by South Korean developer Gravity.

FarmVille as a Lesson in Economics

The game actually represents an interesting lesson in economics.  Players must purchase seeds, trees, and other assets which generate FarmVille “income” after a waiting period of a few hours to a few days.  Such income can then be reinvested in additional income producing assets, buildings, and other improvements.

Most videogames are probably corrosive to the minds of younger people but FarmVille might actually help provide some education on economics.  For example, a simple economics problem involves optimization of crop selection based on seed cost, fuel cost, expected yield, and the time value of money.  The game can also be played in just a few minutes per day, although hours can be spent on it if you get overly enthusiastic or if you have friends who interact with you regularly.

Total “startup capital” invested for the author’s farm was $20 — not too bad at approximately the cost of two movie tickets.  The farm is now self sustaining.  The illustration below is a depiction of the author’s FarmVille farm (click to enlarge). 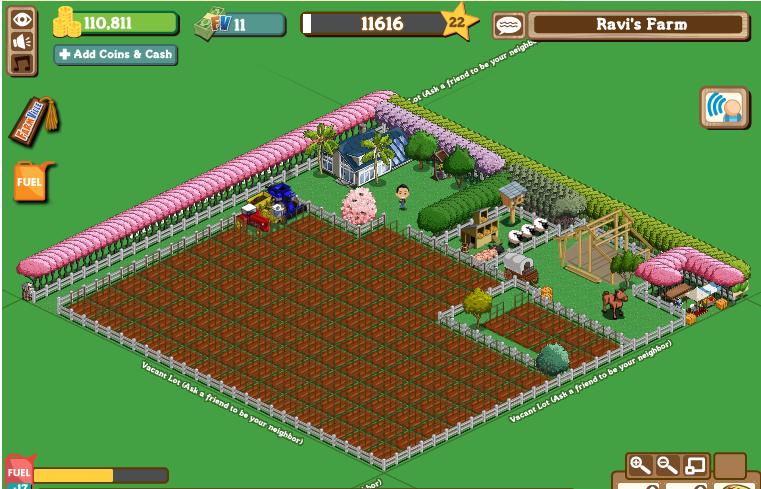