What’s This Talk About a “Smart Grid”?

Anyone who has been paying attention to discussions related to energy policy over the past few years has been hearing about a new “smart grid” that has the potential to play a major role in meeting the energy requirements of the United States in the coming decades.  Charlie Munger, Berkshire Hathaway’s Vice Chairman, made a number of comments regarding the smart grid at the Berkshire Hathaway and Wesco Financial meetings.

Greater Visibility for Consumers and Producers

At the core of the technology is the ability to increase visibility both for the consumer and producer of electricity.  Through variable pricing, consumers will have far more knowledge of what their consumption actually costs and will have opportunities to shift consumption to off peak periods.  For example, a consumer could decide to time his dishwasher to run at 10pm when demand is lower rather than at 7pm after dinner.

While this may seem trivial when applied to the energy requirements of a dishwasher, it is critical when one starts to consider the demands on the grid that will occur if plug in electric vehicles such as the Chevrolet Volt or the BYD e6 (click this link for BYD coverage on this site) are adopted in large numbers.  What is even more amazing is the ability of a smart grid to use such cars as energy storage devices during off peak hours.  In other words, these vehicles could be used to draw down energy at a peak period that was stored during off peak hours.

In the latest edition of its Technology Quarterly supplement, The Economist has published a very informative article that provides an excellent overview of the subject.  A picture can often tell the story more succinctly than words, so I found the graphic below very interesting and worth referencing here: 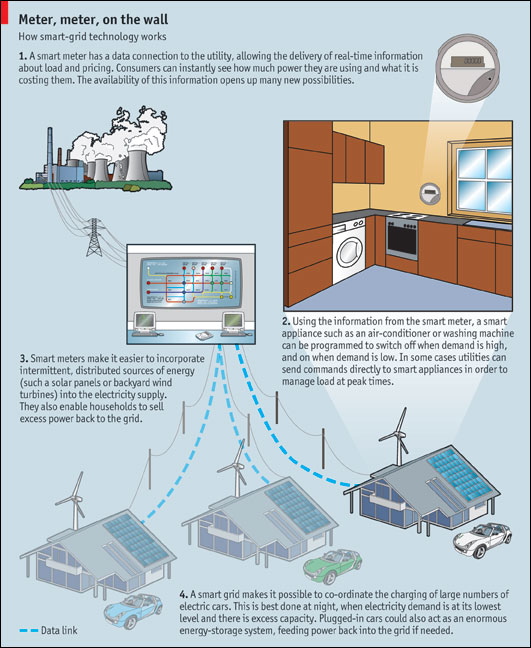 Investing in the Smart Grid

Charlie Munger and others have advocated massive investment in a smart grid system based on the benefits that will materialize from widespread adoption of the technology.  The level of investment is likely to be very significant and could have been a better use of Federal stimulus funds compared to the set of programs that passed Congress earlier this year.  This type of infrastructure spending can legitimately be considered an “investment”, as opposed to many government programs that are often referred to as “investment” but really constitute current consumption.

What’s This Talk About a “Smart Grid”?