T. Boone Pickens made headlines in 2008 with his “Pickens Plan” for American energy independence.  The plan, which consisted of a combination of wind farms and greater use of natural gas, was unveiled as crude oil prices reached an all time peak.  At the time, natural gas prices were also reaching record highs.  Both crude oil and natural gas prices later plummeted as the severity of the recession became apparent.

While both crude oil and natural gas prices have recovered since the lows, natural gas relative to oil remains cheaper.  Some consumers of energy have made attempts to substitute natural gas for crude oil based fuels, as we discussed in an article regarding Qatar Airways’ first natural gas powered flight in October. 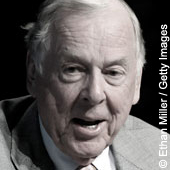 Mr. Pickens wrote an article for the December 14 issue of Forbes Magazine entitled End the Mideast Oil Addiction.  The premise of the article is that the United States still lacks a coherent energy policy and risks future economic and political stability by continuing to be heavily dependent on imports of foreign oil.  In contrast, China is proactively securing energy supplies in several countries around the world.  Mr. Pickens argues that the United States is awash in natural gas and has a century’s worth of supply at current consumption rates.  New methods of extracting gas from shale deposits, while potentially more costly, provide additional sources of domestic supplies.

In the following excerpt, Mr. Pickens presents an interesting idea regarding the potential to dramatically cut the need for imported crude oil by switching the fleet of heavy trucks from diesel to natural gas.  This would have the added benefit of reducing carbon dioxide emissions as well, a point that is not lost on those following the Copenhagen climate summit this week:

About 70% of the oil we import is used as fuel for America’s 250 million cars and light trucks and 6.5 million heavy trucks. Nearly half of the oil used for transportation is used as diesel fuel to power 18-wheelers. Natural gas is the only alternative. It is not only more abundant; it costs half as much and emits almost 30% less carbon dioxide.

If, in the normal course of replacements, we exchanged those 6.5 million heavy trucks running on largely imported diesel for new ones running on domestic natural gas, we could reduce our imports by 2.5 million barrels per day. We would be able to reduce our dependence on oil from the Middle East by half in only seven years.

This idea is attractive and should not require heavy handed government interventions or subsidies.  Natural gas is already significantly cheaper than crude oil based fuels if measured in terms of energy content.  The question is whether adequate production of liquefied natural gas can be brought online in a reasonable timeframe and whether distribution systems can be updated for the fuel.

Disclosure:  The author owns shares of a company engaged in the exploration and production of natural gas.