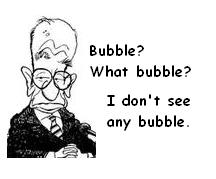 Roger Lowenstein is the author of five books covering financial markets.  His latest book, The End of Wall Street, was published in April.  Mr. Lowenstein is also the author of an excellent biography on Warren Buffett written in 1995 which we reviewed previously.  In an article for the Washington Post today, Mr. Lowenstein makes the case for more timely intervention by the Federal Reserve when financial market bubbles are forming.  Here is a brief excerpt:

Critics of the Fed have long urged it to intervene in bubbles — an argument that seems even stronger now. Had the Fed raised interest rates more aggressively in the early part of the decade, it is possible that banks would not have made so many questionable loans. We can’t know for sure, of course. But we do know what did happen: From 2001 to 2003, the Fed lowered short-term interest rates 13 times, reaching a rock-bottom level of 1 percent. They stayed there another year, and thereafter rose at a painstaking pace. With credit so cheap, people and institutions borrowed as if there were no tomorrow. And when the bust came, it spawned the worst recession in 75 years.

Defenders of Alan Greenspan often claim that the current version of history is being written by Monday morning quarterbacks who failed to predict the bubbles at a time when action could have been taken.  Mr. Greenspan himself has gone so far as to say that individuals who predicted the crash were merely “statistical illusions”.  In other words, at any given time, there are people predicting any conceivable outcome and some will be correct purely by chance.

Vanguard Founder John Bogle and many others have pointed the disingenuous nature of Mr. Greenspan’s attempts to rewrite history.  While it is certainly true that the Federal Reserve’s “dual mandate” to manage monetary policy both for “full employment” and for a stable currency leads to challenges, cutting interest rates to rock bottom levels from 2001 to 2003 clearly inflated the housing bubble particularly by making it possible for adjustable rate mortgages with impossibly low teaser  rates to lure buyers into housing that they had no chance of affording in the long run.

Manipulation of the housing market had real long term costs both for the irresponsible buyers who made unaffordable purchases and later lost their homes and for responsible individuals who refused to purchase over priced housing for years and ended up with a lower standard of living in rental housing.  These responsible individuals may now have opportunities to purchase homes at more acceptable prices but are also bailing out irresponsible homeowners as the Federal Government continues various housing support schemes.