Robert Rubin: “I Did Not Want Significant Operational Responsibility” 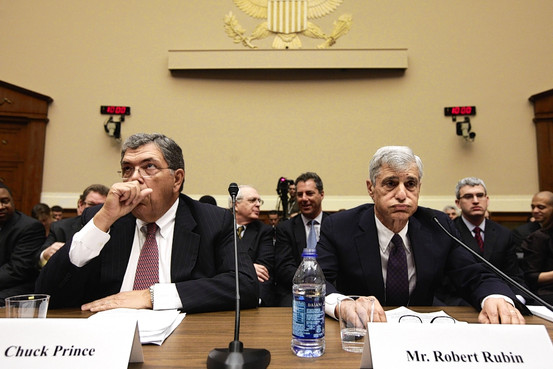 Robert Rubin received a total of more than $126 million in cash and stock compensation over a ten year period at Citigroup for serving as a board member and as a “strategic advisor” to senior management.  However, the role never had any clearly defined operational responsibilities as Mr. Rubin was quick to point out at a hearing of the Financial Crisis Inquiry Commission yesterday:

Let me know turn to Citigroup more specifically.  My role at Citi, defined at the outset, was to engage with clients across the bank’s businesses here and abroad; to meet with foreign public officials for a bank present in 102 countries; and to serve as a resource to the bank’s senior executives on strategic and managerial issues.

Having spent my career in positions with significant operational responsibility — at Treasury and Goldman Sachs — I no longer wanted such a role at this stage of my life, and my agreement with Citi provided that I would have no management of personnel or operations.

This brings to mind the old saying:  “Nice work if you can get it”.

While there is no doubt that Mr. Rubin brought a great deal to the table in terms of his contacts with foreign officials and experience in the industry, this situation always appeared to be an example of the revolving door between Washington and Wall Street that Simon Johnson criticized in his recent book, 13 Bankers, which we reviewed last month.

Was Mr. Rubin really hired for his expertise in the industry and the advice he could provide to senior management or to use his knowledge of government to pave the way for Citi to grow in size and influence to the point where it clearly became “too big to fail” in the recent crisis?  This is a legitimate question to ask in light of Mr. Rubin’s statement that he had no operational responsibilities and was unaware of serious problems until it was too late.

To be fair to Mr. Rubin, it is clear that Citi’s management (which undeniably did have “operational responsibilities”) entirely failed to manage risk properly.  While former CEO Charles Prince should get credit for expressing remorse at the hearings yesterday, he bears a great deal of responsibility for delegating key risk management tasks to a chief risk officer.

As Warren Buffett has stated on several occasions, risk management must be a core responsibility of a CEO and should never be delegated.  Mr. Prince obviously failed to follow this advice and instead famously stated that “as long as the music is playing, you’ve got to get up and dance. We’re still dancing.”

We have now seen what happens when the music stops and an institution is left only with incompetent management and senior advisors who disclaim any operational oversight responsibilities.

Robert Rubin: “I Did Not Want Significant Operational Responsibility”