During the financial crisis of 2008, Warren Buffett played a major role in restoring the confidence of market participants during periods of market stress.  Berkshire Hathaway’s investment in Wrigley, initiated in October 2008, is often thought of as an opportunistic crisis-era investment, but the terms of the deal were actually set much earlier when Mars announced its intent to acquire Wrigley in April 2008.  Despite the tumultuous events of September 2008, the deal proceeded as planned bolstering Berkshire’s reputation when it comes to fulfilling commitments.  With the release of Berkshire’s third quarter report, we now have the information required to fully evaluate the outcome of the Wrigley investments.

On October 6, 2008, Berkshire Hathaway invested $6.5 billion to partially fund the closing of the Mars-Wrigley transaction.  The investment consisted of $4.4 billion par amount of 11.45 percent subordinated notes due 2018 and $2.1 billion of preferred stock paying dividends at a rate of 5 percent and subject to put and call arrangements in 2016, and then annually beginning in 2021.  The redemption amount of the Wrigley preferred was based on future earnings of Wrigley, although the formula was unspecified. More information on the transaction can be found in Berkshire’s 2008 annual report.

Although these investments were supposed to last beyond 2016, the subordinated notes were redeemed in 2013 and the preferred stock was repurchased by Mars/Wrigley in September 2016.  Both early redemptions involved Berkshire receiving a premium in order to give up the attractive earnings power of these investments prematurely.  Let’s take a look at the outcome of each investment.

The initial investment was $4.4 billion on October 6, 2008 and the interest rate was 11.45 percent, which presumably was paid in quarterly installments.  On October 1, 2013, Berkshire agreed to an early redemption of the notes at 115.45 percent of par value, or $5.08 billion.  The exhibit below shows the estimated cash flows associated with this investment resulting in an estimated internal rate of return of 14.4 percent. 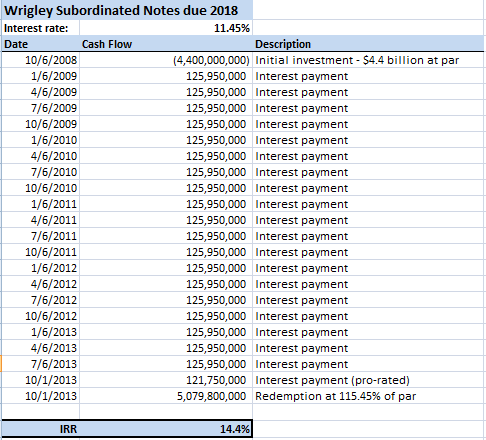 The initial investment was $2.1 billion on October 6, 2008 and the dividend rate was 5 percent, which presumably was also paid to Berkshire on a quarterly basis.  Although the preferred stock was not fully redeemable by Wrigley until sometime after 2021, Berkshire agreed to allow the preferred stock to be repurchased on September 27, 2016 for 115.45 percent of par, or $5.08 billion.  The exhibit below estimates the cash flows associated with this investment and estimates an internal rate of return of 14.1 percent. 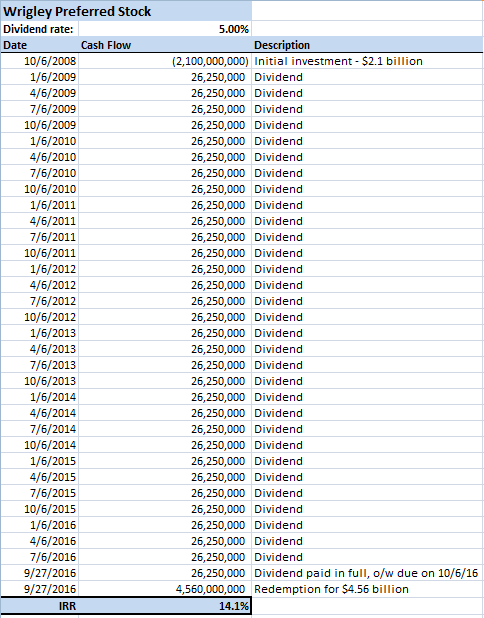 In December 2009, Berkshire agreed to invest $1 billion in Wrigley 5 percent senior notes maturing in 2013 and 2014.  Berkshire’s disclosures are not very detailed with respect to the senior notes but it appears that they paid interest to Berkshire as scheduled and were redeemed on schedule in 2013 and 2014.  Presumably, the internal rate of return was about 5 percent on these notes.

Looking at the subordinated notes and the preferred stock, it is clear that IRRs in excess of 14 percent are attractive in absolute terms.  It is important to remember that this deal was negotiated in April 2008, not in October 2008.  The terms of the deal would have been more favorable to Berkshire Hathaway had the deal been negotiated in October 2008, although it is possible that the transaction would not have taken place at all due to overall market conditions.

Berkshire obviously had alternate uses for cash both in April 2008 and October 2008.  If Berkshire had not invested in Wrigley, the $6.5 billion could have been invested in any other financial asset or used for the acquisition of a wholly owned subsidiary.

From October 2008 to September 2013, the S&P 500 had annual returns of approximately 14.4 percent, assuming reinvestment of dividends.  It is interesting that the IRR of the subordinated notes is quite similar to the returns from the S&P 500, but we should keep in mind that we are comparing apples to oranges given that Berkshire’s investment in Wrigley was fixed income and the S&P 500 is an equity index.  From October 2008 to September 2016, the S&P 500  annual returns were approximately 13.1 percent, assuming reinvestment of dividends, which is less than the IRR of the Wrigley preferred stock investment. Again, this is probably not the best benchmark to look at since a preferred stock cannot be compared to an equity index.

Despite the limitations in the crude comparison presented above, it is pretty obvious that the Wrigley investments were very satisfactory.  It is possible that Warren Buffett might have deployed the $6.5 billion differently if he had known about the late 2008/early 2009 market collapse at the time he negotiated the Wrigley transaction in April 2008.  However, Berkshire obviously was not about to back out of a commitment and the end result hasn’t been anything for Berkshire shareholders to complain about.

For a discussion of other crisis era investments, please read the section entitled Buffett Seizes Opportunities During the Financial Crisis contained within In Search of the Buffett Premium.