The Association of American Railroads has released its Rail Time Indicators (pdf) report for January 2011 which provides a great deal of data covering the freight rail industry in 2010.  We have previously followed trends in railroad traffic more closely than many other macroeconomic indicators partially inspired by Warren Buffett’s comments regarding his choice of railcar loadings as one of the economic indicators he would wish to receive if stranded on a desert island.  The January AAR report is particularly interesting because it includes comparisons to prior years and reveals that the rebound in 2010, while very sharp, has not come close to erasing the devastating impact of the recession.

While total carloads on U.S. railroads in 2010 increased by 7.3 percent and total intermodal volume increased by 14.2 percent compared to 2009 levels, both measures are still below the levels achieved in 2008.   In fact, the last time U.S. carloadings were as low as they were in 2010 was in 1993 and intermodal volume was at its lowest level since 2004.  While all of the individual commodity categories in the AAR report increased in 2010 compared to 2009, all categories were also still lower than 2008 levels.  The following charts from the report nicely illustrate the high level trends in rail carloads as well as intermodal containers over the past two decades: 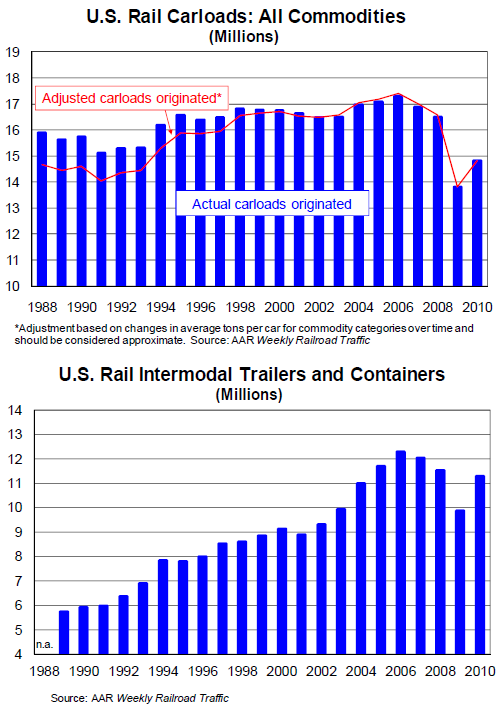 Rail car loadings are best used as an indicator of the physical economy in the United States and obviously cannot be used to measure or predict the growing percentage of GDP associated with services and intangible products.  Rail indicators will not tell us how many people are going to restaurants, staying at hotels, buying expensive haircuts, or downloading apps on their phones.  Nevertheless, the correlation between indicators in the report and measures of economic progress are strong enough to pay serious attention to railroad indicators.

The AAR report contains numerous charts and tables with figures for specific industry groups along with interesting data correlating various economic indicators with railcar loadings.   While it has been beneficial to follow the report each month, the latest report with annual data for 2010 is particularly important to review.

Disclosure:  The author of this article owns shares of Berkshire Hathaway, the parent company of Burlington Northern Santa Fe.