P&C National Underwriter has published its annual report listing data for the top 100 individual insurance companies as well as the top 100 insurance groups.  Due to improvements in investing results, total policyholder surplus for the companies in the survey increased to $521.7 billion at the end of 2009 which is still 2 percent below the $529.8 billion level at the end of 2007 but greater than 13 percent above the $462.1 billion level posted at the end of 2008.  However, the insurers posted underwriting losses as a group and experienced a drop in net written premiums of 3.8 percent in 2009.

Better than 2008, But Soft Market Persists

The industry experienced an exceptionally challenging year in 2008 as poor investment results in the wake of the financial crisis were compounded by generally weak underwriting results and the impact of catastrophe losses from Hurricane Ike in particular.  With financial markets recovering significantly in 2009 and fewer catastrophe losses compared to 2008, the industry was able to recover but could not achieve underwriting profitability as pricing remained soft.  The report states that the combined ratio across all lines was approximately 101 in 2009 which is four points better than the 105 result in 2008.

The report includes information on insurance groups including Berkshire Hathaway as well as individual companies within each group (such as GEICO, National Indemnity, etc).  When examining the overall industry results, it is interesting to observe how Berkshire’s overall results are far better than industry averages.  For example, while the overall industry combined ratio for private passenger auto was 100.5 in 2009, GEICO posted a combined ratio of 93.7.  Progressive, which is GEICO’s main competitor, posted an even better combined ratio for 2009 at 92.2.  Click on this link for a chart from the report showing the results for the top 100 companies in the survey.

The report provides a useful summary for the top 20 insurance groups in which each group is broken down into individual subsidiaries.  This information might be of interest to Berkshire Hathaway shareholders since it provides more granularity than Berkshire Hathaway’s annual report and 10-K filings.

We should note that the data used in the survey is based on statutory accounting reports that each insurer files with state regulatory agencies.  Statutory accounting differs from generally accepted accounting principles and, as a result, the figures reported are not identical to the statistics derived from GAAP reporting.  Some of the differences between GAAP and statutory accounting are explained in a report on insurance accounting (pdf) published for the Casualty Actuarial Society (see pages 21 to 24). The data provided in The Rational Walk’s briefing book on Berkshire was based on GAAP accounting figures.

The following chart lists net written premiums, percent growth, and combined ratios for 2008 and 2009 for the insurance companies under the Berkshire Hathaway insurance group (click on the image to enlarge).  Note that the data for some of the companies writing very small levels of premium have combined ratios that have no analytical relevance. 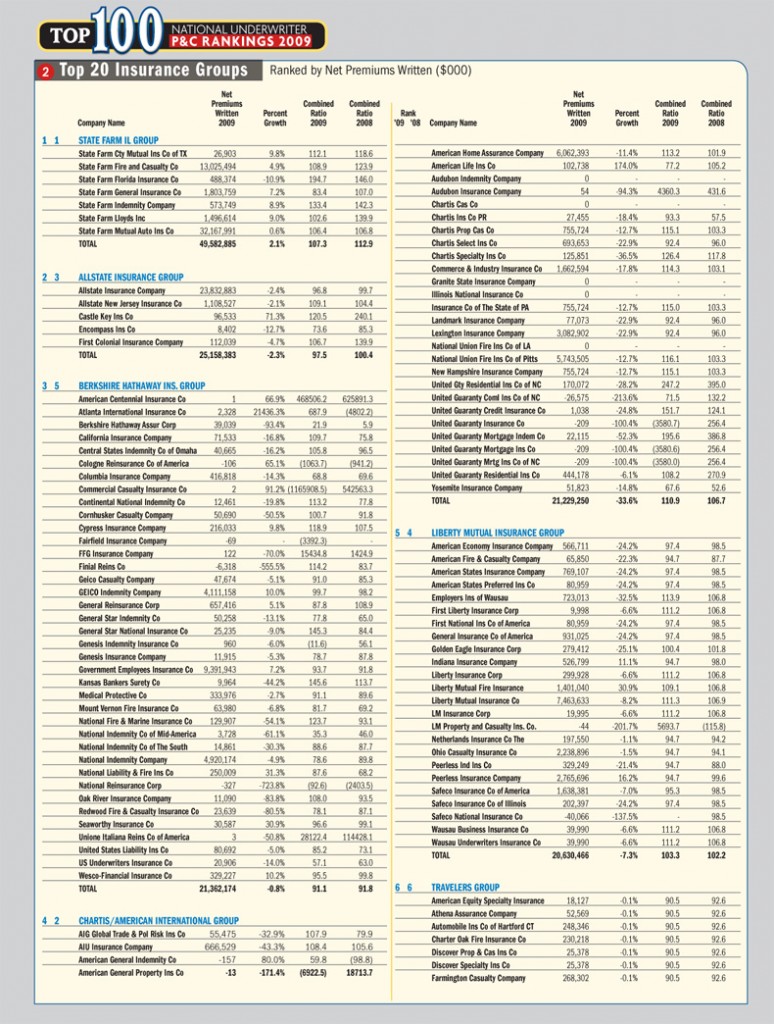