“The stock market is a no-called-strike game. You don’t have to swing at everything – You can wait for your pitch.”

The wide variety of investments held by successful value investors indicates that there are many different approaches that can yield excellent results over long periods of time. Hyperactivity and a search for instant validation may be exciting but such vices are the sworn enemies of investors seeking to achieve their long term goals.  Success requires an inquisitive mind, reading widely, and acting in a judicious manner when presented with understandable opportunities with a margin of safety.

Thousands of “Pitches” — Where to Start? 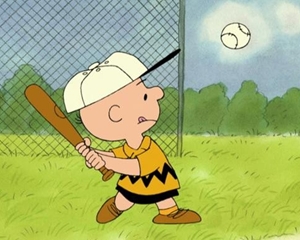 When he was getting started in the 1950s, Warren Buffett was known for reading every page of the Standard & Poor’s stock manuals in search of opportunities.  The modern day equivalent might be repeating this process using Value Line and there is much to be said for wide exposure to voluminous data.  Each page of data in Value Line can be viewed as a “pitch”.  Most pitches do not come anywhere close to qualifying for further research let alone a “swing” involving an allocation of capital.  Often only one or two companies in a Value Line issue of 130-140 companies may spark an interest in pursuing further work.

There is no short cut that can replace in depth research and every investor should, at a minimum, read a company’s latest 10-K, proxy statement, and 10-Q filings.  However, there are ways to increase the percentage of “pitches” that are interesting enough to justify further work.  The value investing community may be small but seems to have an unusually large number of investors willing to exchange ideas via blog posts and discussion forums.  At a relatively modest cost relative to the  potential value of ideas, some investors share their best ideas exclusively with subscribers. 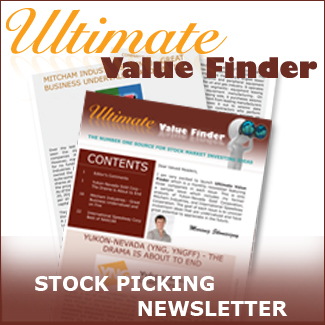 We recently had the opportunity to review a new subscription based newsletter published by Mariusz Skonieczny, founder and president of Classic Value Investors.  Mr. Skonieczny is the author of Why Are We So Clueless About the Stock Market?  which we reviewed in 2009 as well as a useful e-book on understanding financial statements which we reviewed in 2010.

Ultimate Value Finder provides readers with three investment ideas each month.  Based on the free sample issue and the inaugural January 2012 issue, it is clear that the ideas presented are well researched and presented in a clear and compelling manner.  Most importantly, Mr. Skonieczny clearly takes a value oriented approach when selecting companies for the newsletter and bases his valuation on conservative assumptions.  Most of the companies he has covered are not widely followed by analysts and have been misunderstood or simply ignored by the stock market.

One unique situation identified in the January issue involves a company that has received some attention in the value investing community over the past few years but has been largely ignored by the market until very recently.  Premier Exhibitions (NASDAQ: PRXI) is in the business of presenting museum quality exhibitions of artifacts from the Titanic wreck as well as educational exhibits of preserved human body parts.

Premier Exhibitions has long held clear title to 2,000 artifacts from a 1987 exhibition but the status of 3,000 artifacts recovered after 1987 were in question until August 2011 when a U.S. District Court awarded a specie salvage award to Premier.  In total, the artifacts have an appraised value well in excess of Premier’s market capitalization.  However, certain limitations on the sale of exhibits intended to keep the artifacts together as a collection may have tempered the market’s enthusiasm and the court victory was largely ignored.

The January 2012 issue of Ultimate Value Finder presents research on Premier that goes beyond what one may have read about the company from other sources.  Through a diligent review of company filings, clues were found that indicated that an auction of the Titanic artifacts may be imminent.  On December 23, shortly before the close of trading on a slow day right before the Christmas holiday, Premier announced that it had hired  an auction house to conduct a sale of the collection.  The news did not trigger an immediate rise in Premier’s stock price.  In a strange delayed reaction, the stock did not rise significantly until December 28, nearly two full trading days after the news was revealed. However, Mr. Skonieczny released the January issue on December 26 to allow his subscribers to investigate and potentially act on the opportunity.

Separating the Wheat from the Chaff

There is no shortcut to success in investing and we view most newsletters with skepticism — particularly those promising a “system” that is guaranteed to produce short term results.  However, well researched ideas grounded in a value investing mindset have the potential to improve results by identifying companies worthy of additional research.  Not every company in Ultimate Value Finder or any other newsletter will spark an interest in further research.  However, with thirty-six ideas provided each year, it is more likely than not that at least a few companies will warrant further study and perhaps one of the opportunities may result in an actual investment.  At the very least, one is likely to see more attractive “pitches” by reading Ultimate Value Finder which we enthusiastically recommend to our readers.

Disclosure:  No position in Premier Exhibitions. The Rational Walk receives a review copy of the newsletter but does not receive commissions or other compensation for referrals.