Earlier this week, Qatar Airways made history by operating the first ever commercial flight using a fuel partially derived from natural gas.  The flight from London to Doha used a mixture of 50% conventional jet fuel and 50% synthetic kerosene made by converting natural gas to liquid form.  Qatar is awash in natural gas and seeking ways to put this natural resource to good use.  This situation is a very good example of the substitution effect in economics and is worthy of discussion.

Those who follow energy prices have been hearing a great deal about how storage capacity for natural gas in the United States is nearly full leading up to the cold weather months when the fuel will be used for heating in parts of the country.  The precipitous fall in natural gas prices over the past year was exacerbated by storage capacity constraints and resulted in very low gas prices in early September (which have since recovered somewhat).  New, albeit expensive, techniques used to recover gas from shale deposits and discoveries of large gas fields have contributed to the negative sentiment.

When commodities diverge in price in a radical way, consumers of the commodity attempt to use substitution to control overall costs.  This is evident in my own shopping habits.  If the price of apples is unreasonable, I often choose to buy bananas instead.  Consumers of commodities are often locked into particular purchasing habits due to technology.  An owner of a car cannot make a decision between buying gasoline or diesel at each refueling stop, but could make longer term decisions regarding his next car based on fuel pricing.

Since the summer of 2008, both oil and natural gas prices have plummeted, but natural gas has experienced a much more severe decline.  Consider the chart below that plots the ratio of the price of a barrel of crude oil to the cost of natural gas per thousand cubic feet (mcf): 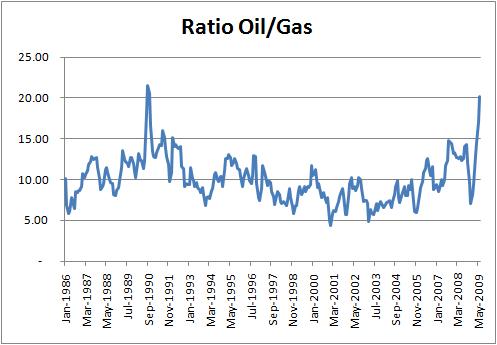 From January 1986 to July 2009, the average ratio was 10, the minimum ratio was 4.3, and the maximum ratio was 21.5.  One barrel of oil has approximately six times the energy content of one mcf of natural gas.

Obviously, the fuel system of a piece of equipment such as an airplane cannot simply switch from one type of fuel to another immediately in the way that I can purchase bananas rather than apples if the cost of apples relative to bananas increases significantly.  However, the same principle applies:  If there is a fundamental imbalance between commodities that can be seen as substitutes, eventually, the market will react by substituting the cheaper  commodity for the more expensive one.

Maybe Wood vs. Propane is a Better Example …

Since we are discussing energy, perhaps a better example of a consumer driven substitution involves home heating fuels.  Several years ago, I owned a home with two heating systems:  a propane central heating system and a wood burning stove.  With the luxury of having two side by side systems, I could easily optimize my use of one fuel over another based on the relative price of each commodity (while taking into account the added value of not having to chop wood when opting for propane heat). 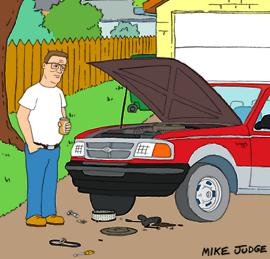 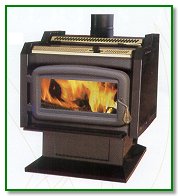 The airline industry is doing what countless others have done in decisions throughout the economy when they investigate ways in which relatively cheap natural gas can be substituted for more expensive oil based jet fuel.  Although the lead time for such a switch is long in aviation, the same economic principles apply eventually.

Those who predict the date that the world will “run out” of oil based on current consumption levels need to take into consideration the dynamic nature of the economy and the ability of consumers to switch to less expensive (and more plentiful) alternatives as a resource grows more scarce.  The reality is the world will never “run out” of oil.  Even if one assumes no additional discoveries, remaining supplies of oil will simple escalate in price to the point where the world is forced to substitute other fuels instead.

Disclosure:  The author owns shares of a company engaged in the exploration and production of natural gas.  No opinion is being provided regarding the near term movement of the price of oil or natural gas.  The author does not recommend short term speculation in commodity futures.