This is the second in a series of articles covering “unpopular” larger companies.  Benjamin Graham believed that such companies may present opportunities for enterprising investors.  We discussed the Graham approach in more detail in a recent article.

Recent events in the Gulf of Mexico have increased awareness of the risks facing oil exploration companies operating in very deep waters.  Drilling for oil beneath five thousand feet of water entails challenges that test the abilities of exploration companies under the best of circumstances.  We are now witnessing the impotence of industry or government to deal with a well that has been gushing out of control for over a month.  The current moratorium on deepwater drilling in the United States could be adopted by other countries as well and we cannot predict the duration of the moratorium.  In this environment, is any investment in oil exploration or ancillary products and services worthy of consideration? 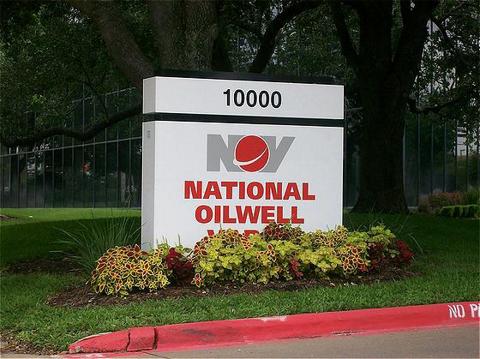 National Oilwell Varco (NOV) was formed on March 11, 2005 by the merger of Varco International and National-Oilwell.  The company is the fifth largest oil and gas products and services company by revenues.  The company is a supplier of rig technology, petroleum services and supplies, and distribution services.  Customers include oil majors as well as drilling contractors.  National Oilwell Varco has not been mentioned as one of the involved parties in the Deepwater Horizon disaster.

One of the daunting aspects of investing the oil and gas exploration industry involves the amount of industry jargon that an investor must understand in order to intelligently read financial reports.  The National Oilwell Varco 2009 10-K report includes a glossary of terms (pages 23 to 27) that the reader is encouraged to review.  The business overview section also provides a good understanding of the interaction between firms such as NOV and drilling contractors and exploration firms. We will not attempt to provide an introduction to the industry and terminology to keep this article to a reasonable length.

Due to the importance of the number of drilling rigs as well as the influence of oil and gas prices on drilling activity, we present the exhibit below to illustrate industry trends in recent years (along with data on the oil/gas ratio, unrelated to this article, but a subject we have covered from time to time in the past).

As we can see, exploration companies respond to incentives.  As the price of natural gas and oil increased from 2004 to 2008, rig counts increased.  The collapse in prices in 2009 resulted in a decrease to worldwide rig counts.

The following exhibit shows the past five years of performance and valuation data as reported by Value Line.  When looking at the historical record, please be aware that NOV acquired Grant Prideco on December 16, 2007 in a $7.2 billion cash and stock transaction.

We can see that overall sales per share track the active rig count statistic on a directional basis.  In addition, we can see that overall profitability has been enhanced in recent years as high commodity prices created a rush to drill more active wells giving NOV and other firms in the industry the ability to expand margins. 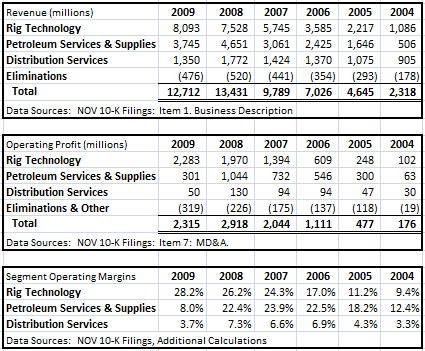 The following exhibit shows the distribution of sales by geographic location for the past five years.  The United States only accounts for 27 percent of worldwide sales for 2009.  As recently as 2006, sales in the United States were in excess of fifty percent of revenues.

The chart below shows sales by geography broken down for 2009. 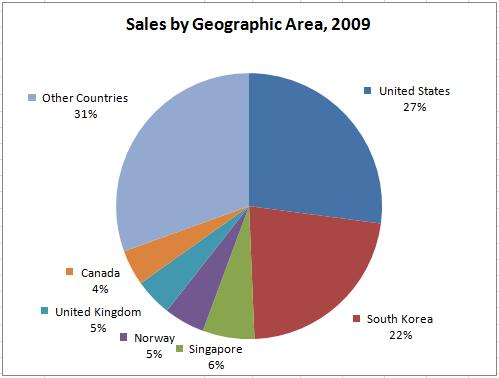 The degree of geographical diversification at NOV provides some comfort against the risk that any one country’s regulatory changes will have an outsize influence on overall results.  However, obviously the United States is a large market and other countries, particularly developed countries, may adopt risk averse policies going forward toward deepwater exploration.

From a regulatory perspective, the clear risk is that new policies will slow or stop deepwater exploration by NOV’s customer base which will have a corresponding effect on demand for the company’s products.  A lesser regulatory risk may involve mandated changes to parts (blowout prevents are an obvious example) that companies such as NOV will have to implement.  While it is likely that any increase in cost will be passed on to the customer, the dynamics of unknown regulatory changes to NOV’s products and the impact on margins cannot be determined.

As noted previously, NOV’s Rig Technology segment has a significant backlog of orders based on the long planning cycle for new oil exploration.  The company’s backlog grew from $0.9 billion at March 31, 2005 to $11.8 billion at September 30, 2008, but has fallen to $5.4 billion on March 31, 2010.  Most notably, the land rig backlog comprises 13 percent while the offshore backlog comprises 87 percent of total orders as of March 31, 2010.  In general, customers cannot cancel projects for “convenience” and provide substantial down payments.  Only 3.6 percent of the starting backlog balance on September 30, 2008 has been cancelled to date.  Nevertheless, it is obvious that any extended moratorium on deepwater drilling will have a negative impact on NOV’s backlog.

One important point to note regarding the backlog is that 91 percent of the total backlog is related to equipment destined for international markets.  Thus, even though 87 percent of NOV’s backlog is related to offshore projects, the vast majority are for projects outside the jurisdiction of the United States.  As noted previously, other countries may very well adopt a moratorium on deepwater activity as well, so the heavy international bias of the backlog may not offer as much protection as envisioned.

National Oilwell Varco closed on Friday, May 28 at 38.13.  The shares have fallen in sympathy with the overall sector over the past five weeks and traded above $46 as recently as April 26.  The shares are currently trading at under ten times likely earnings for 2010.  The company clearly has enjoyed healthy profit margins over the past five years and while margins and profitability were down due to lower commodity prices in 2009, overall results held up quite well.

The international diversification of NOV’s business and the other factors discussed above seem to indicate that risks specifically related to the Deepwater Horizon disaster should have a muted effect on the company’s future progress.  However, NOV is still exposed to overall commodity prices and industry risks.  If oil and natural gas prices crash to the lows of early 2009, exploration activity is sure to decline significantly and this will be reflected in active rig counts.  This will have a corresponding negative impact on NOV’s results. The most likely scenario for a commodity price crash would be another worldwide recession, perhaps brought about by the current debt crisis in Europe.

In summary, it is not “obvious” that NOV is undervalued at current levels, but it seems reasonable to regard the company’s future fate as  more tied to overall global demand for oil and natural gas and the prices of these commodities rather than to the regulatory risks associated with Deepwater Horizon.  Therefore, future panic associated with Deepwater Horizon may present an opportunity to establish a position in NOV if the shares fall in sympathy with players that are more directly exposed to the disaster.

Disclosure:  No position in National Oilwell Varco.  Please note that the author is not an expert in the oil supplies and services industry having started research in the field only in the weeks since the Deepwater Horizon incident.  The author owns shares of Contango Oil & Gas, an exploration firm with the majority of operations in shallow Gulf of Mexico waters.