With the 13-F filing season underway, investors are again focusing on the equity portfolios of institutional investors who are required to make quarterly disclosures to the public.  Analysis of 13-F reports should be taken with more than a grain of salt given that reported positions are about six weeks old.  Perhaps more importantly, investors are only required to disclose long positions while potentially offsetting shorts are not included.  As a result, it is not uncommon for observers to incorrectly infer that an investor might be bullish on a stock when, in fact, a long position was used to partially offset a net short position.

Despite the limitations, investors can gain some utility from 13-F reports especially when looking at managers who are known for running long-only portfolios and tend to have longer investment holding periods.  In such cases, the six week reporting lag is not as material since it is probable that positions in the report are pretty close to those that were held at the reporting date.  Markel Corporation and Berkshire Hathaway are good examples of companies where the 13-F should yield insights.  A concise view of Markel’s portfolio can be found on Dataroma. The source document is filed on the SEC website.

One of the striking aspects of Markel’s portfolio is that it has a very large number of position (129 companies as of December 31, 2015) but is still quite concentrated with the top ten positions accounting for nearly half of the portfolio’s market value.  Twitter can be a good place to discuss companies with other investors and in the course of discussing Markel’s large number of positions, there were some questions regarding whether this could be a sign of “closet indexing”.  A closet indexer attempts to emulate the composition of a benchmark such as the S&P 500 and deviate only in a very measured manner.

Thomas Gayner, Markel’s co-Chief Executive Officer and longtime investment manager, has an excellent reputation in the value investing community and has long been known for beating the market.  In the past, he has mentioned that the large number of very small positions are simply meant to track companies that could receive more meaningful allocations in the future.  The composition of the important holdings also does not closely resemble any index.  On Twitter, the question of Mr. Gayner’s long term record came up and, surprisingly, it was difficult to find a single source documenting the record.

Markel’s annual reports include investment returns on an annual basis both for equity and fixed income portfolios.  By going through the annual reports that are available on Markel’s website as well as 10-Ks filed with the SEC, it is possible to put together a record of Markel’s equity portfolio performance since 1992.  Although the 2015 annual report has not been released, Markel issued a press release documenting 2015 results and also held a conference call.

The exhibit below provides the data collected for Markel’s portfolio compared to the total return of the S&P 500 for each of the past 24 years.  In addition, the equity portfolio value at year-end is provided for 1995 to 2015. 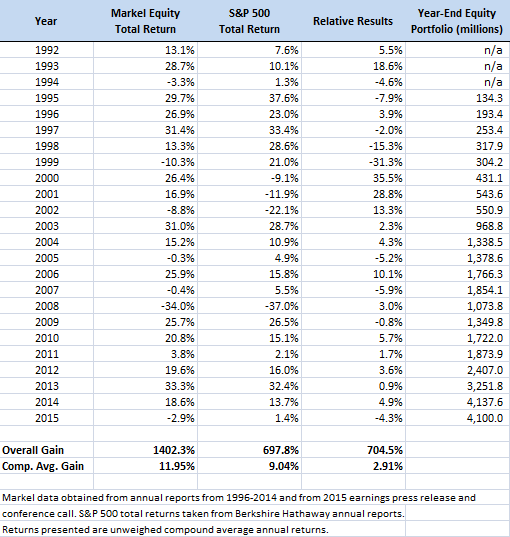 This analysis reveals an impressive track record that clearly demonstrates investment skill.  Markel’s return exceeded the total return of the S&P 500 for 15 of the 24 years in question and often by substantial margins.  The cumulative impact of the superior performance becomes very evident when looking at the overall gain and compound annual average return over nearly a quarter century.  During much of this period, Markel was working with relatively small amounts of capital.  However, a $4.1 billion equity portfolio is still small enough to take meaningful positions in a very large number of companies.  In contrast, a company such as Berkshire Hathaway with an equity portfolio of nearly $132 billion faces much more serious limitations regarding the potential universe of investments that can impact overall returns.

Markel’s equity portfolio has an unusual and somewhat unwieldy collection of companies but the vast majority appear to be “tracking positions” that are not particularly meaningful to overall results.  The portfolio remains heavily weighted toward the top ten companies.  This concentrated approach combined with the company’s track record should put to rest the idea that the portfolio strategy seeks to emulate an index.  Future results may not match the past but we aren’t likely to see a convergence with the returns of the S&P 500 since Markel’s portfolio is clearly not a closet index fund.