Markel Corporation released second quarter 2015 results yesterday and held a conference call this morning.  Although second quarter results were favorable for the insurance business, unrealized losses in the investment portfolio caused book value per share to decline slightly to $554.97.  Book value is still up approximately 2 percent for the year. Diluted net income per share for the first half of 2015 more than doubled to $20.21 compared to $8.91 for the first half of 2014.

Markel’s common stock only recently surpassed $800 per share and approached $900 in recent days.  Despite a modest decline today, Markel’s stock is still up over 29 percent in 2015 leaving its price-to-book ratio at levels not seen since before the 2008-09 financial crisis.

Markel has continued to post very strong results for its core insurance business.  For the first half of 2015, the consolidated combined ratio came in at 90 percent which is down substantially from 98 percent for the first six months of 2014.  The improvement in the first half combined ratio was driven by improvements in all three of the company’s insurance segments.  Markel has continued to demonstrate solid underwriting performance and has been willing to shrink premium volume when justified.  The table below, taken from Markel’s 10-Q report, provides a good summary of the performance of the insurance business for the second quarter and first half:

It is important to note that Markel has a history of conservatism when it comes to establishing reserves for losses.  To an unusual degree compared to less complex businesses, insurance executives have a great deal of latitude when estimating ultimate losses related to current year events.  This is particularly true in lines of business where losses may not be reported for a long period of time.  It has become a recurring theme of Markel earnings reports to see “favorable development” on prior years’ loss reserves.  While it may seem like focusing on “favorable development” is an exercise in over-analyzing the minutia of an insurer’s internal management, it is indeed of vital importance for the serious investor.  The table below illustrates the  major impact prior years’ development can have on periodic reported results: 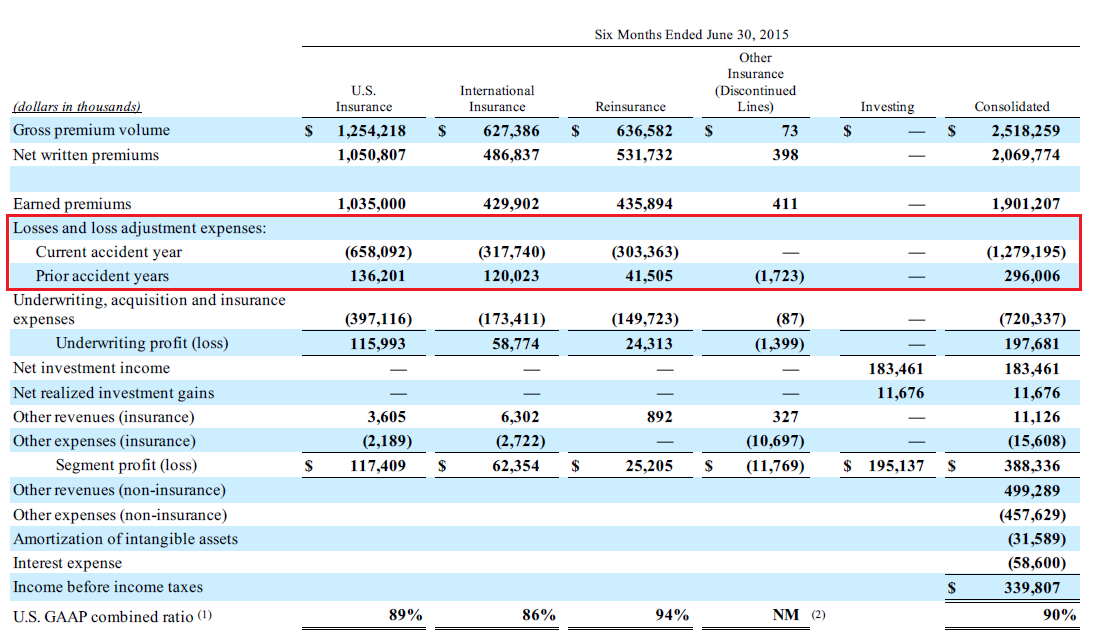 Clearly the magnitude of prior accident year development can have a very large effect on the results being reported for any given period, to the point where development can often be larger in magnitude than the periodic underwriting gain or loss, making it the controlling element in whether underwriting is profitable or not for a given period.  Markel does appear to often over-reserve in current periods only to scale back estimates in later years.  Such conservatism, within reason, is a positive attribute since surprises can also be negative.  Unfavorable development is also often known as “reserve strengthening” in insurance company jargon and typically something investors are not pleased to be surprised with.

Overall, Markel continues to demonstrate a longstanding ability to generate underwriting profits in a conservative manner.

Markel’s history of investing shareholders equity and policyholder float at attractive rates of return has been an integral component leading to strong book value growth.  The table below is a good summary of investing results for the second quarter and first half of 2015: 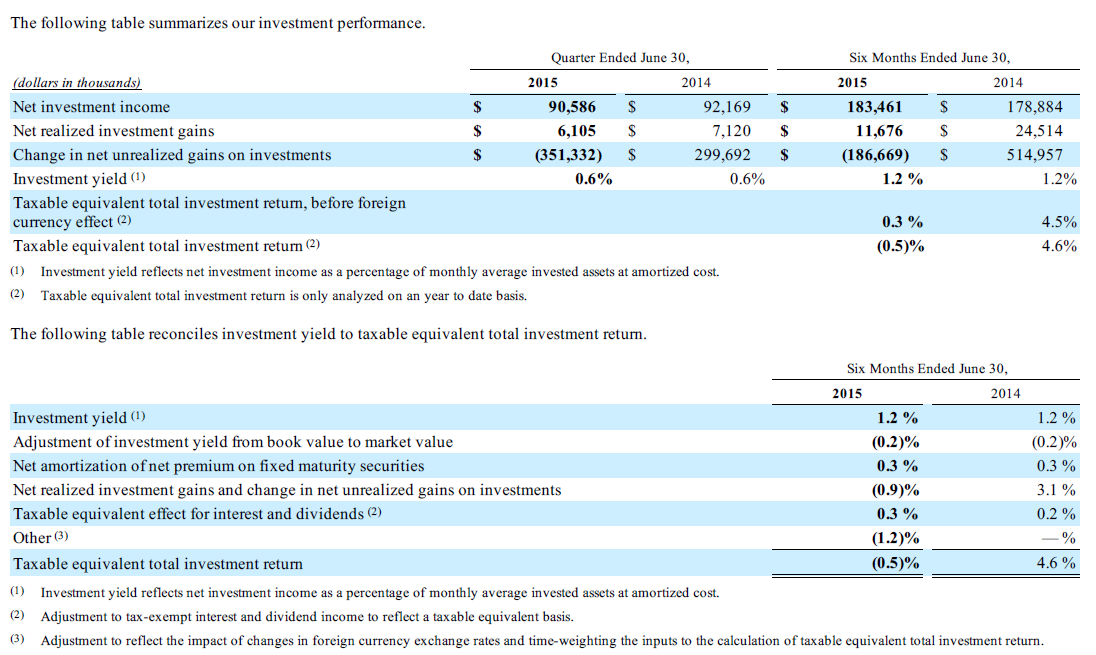 Although the components of the investing segment that are reflected on Markel’s income statement were roughly comparable to the results posted last year, there were significant unrealized losses in the second quarter of 2015 that negatively impacted comprehensive income and book value per share. In the press release as well as the conference call, management attributed the unrealized losses to an increase in interest rates during the second quarter as well as strength in the U.S. dollar.

A portion of Markel’s fixed income portfolio is invested in securities denominated in foreign currencies with the intent of matching these assets to projected future policyholder liabilities also denominated in foreign currencies.  While a stronger U.S. dollar results in a decline in the reported value of these fixed income securities, the matching liability also declines resulting in minimal net exposure.

The more important factor leading to negative reported results in the quarter is clearly a rise in interest rates but this will eventually have a silver lining as Markel reinvests maturing fixed income securities into new securities with a higher yield.  This will result in net investment income rising in future years.  Markel’s fixed income portfolio duration is relatively low which is a positive attribute during times of rising interest rates.

Although Markel still does not recognize Markel Ventures as a reportable segment, disclosure has improved in recent years.  The following table provides a reconciliation of EBITDA, management’s preferred metric, to reported net income:

One quirk in quarterly results for Markel Ventures has to do with the Cottrell acquisition which closed in July 2014.  Markel linked a portion of the purchase consideration to Cottrell’s post-acquisition performance through 2015.  Since Cottrell has performed better than anticipated at the time of the acquisition, Markel will have to pay additional “earn out” compensation to the prior owners.  Rather than treating this earn-out compensation as part of the purchase price of Cottrell, accounting regulations force Markel to treat the earn-out as a current period expense.  During the quarter, Markel increased its estimate of the earn-out by $17.6 million.  Management views this payment to Cottrell’s former owners as part of the purchase price of Cottrell while accounting regulations treat it as a current period expense.  It appears pretty clear that Markel’s management makes the more logical case regarding how to view this payment.  As a result, one can view current period results as quite a bit more favorable than reported in the table above.

Markel reported a solid second quarter and first half of 2015 despite a quarter-to-quarter decline in book value per share driven by the effect of rising interest rates on the company’s fixed income portfolio.  The investment case described in June when Markel breached the $800 per share level remains intact.  However, it is important to note that the share price has advanced considerably since June and even more dramatically over the past year.

Markel now trades at approximately 1.59x book value which is close to a high in the post 2008-09 crisis period.  However, while this price-to-book ratio looks high if the post-crisis average is the “new normal”, it should be recognized that it would represent more of a floor for the price-to-book ratio that prevailed from the turn of the century until 2007.  Overall, even at today’s higher price, Markel appears to represent a compelling opportunity to own a high quality insurance business with additional potential upside if Ventures evolves into a smaller version of Berkshire Hathaway’s non-insurance conglomerate over time.  However, it would be unreasonable to expect share price increases in the future to come anywhere close to the pace of the recent advance.