Shortly after 8:30 this morning, cable news programs and web sites quickly reported the government’s initial estimate of 3.5% growth in Gross Domestic Product (GDP) for the third quarter of 2009.  In terms of depth of reporting, most of these news stories on macroeconomic developments are similar to stories regarding company earnings.  If your only source of information are the “headline numbers”, you will be left with a stream of data that is a mile wide and an inch deep.

Whether you are researching a company to determine whether to make an investment or reading about macroeconomic trends, it is always preferable to go to the primary sources whenever possible.  Primary sources of information for public companies can be found on the SEC website.  A wealth of information regarding economic data may be found on government websites.

The Bureau of Economic Analysis (BEA) published a report (pdf) on the Q3 GDP growth estimate this morning.  The report contains several paragraphs describing GDP growth during the quarter along with a number of tables presenting various statistics.  The BEA also maintains a number of online tools such as this report which breaks down the contributions to the percent change in real GDP, part of which is displayed below (click on the image for a larger view of the data). 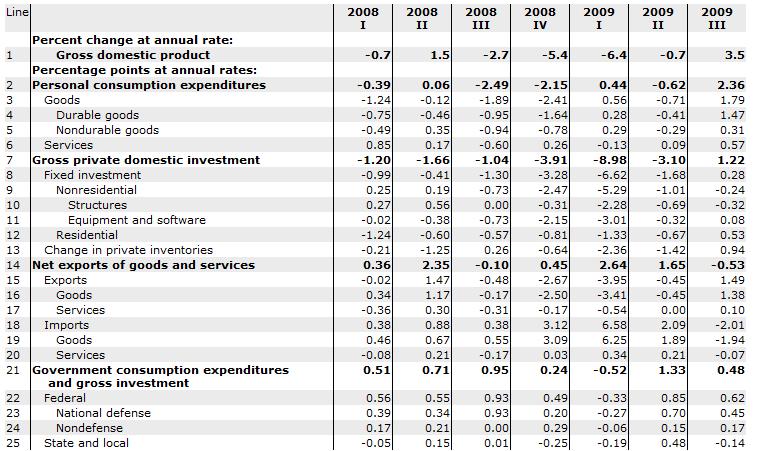 Looking at the statistics in more detail, it is apparent that a significant portion of the growth in third quarter GDP came from increases in personal consumption.  How could this occur during a period in which unemployment marched steadily higher and neared double digit rates by the end of the quarter?

The government’s “Cash for Clunkers” program clearly had a major impact.  This is a component of the stimulus package that has come to an end and is no longer driving auto sales.  If critics are correct, much of the economic activity associated with this form of durable goods consumption was simply borrowed from future periods (such as the current quarter).  Edmunds, a widely respected source of information on the auto industry, estimated that the vast majority of “Clunker” sales were simply borrowed from future periods.

Was this good policy?  That is a political question outside the scope of this article.  The main point is that examining the data behind the 3.5% “headline” GDP number is very revealing when it comes to what may transpire in the current quarter when it comes to personal consumption.

The Wall Street Journal, in an article entitled “America’s Grossly Distorted Product”, estimates that 2.2% of the 3.5% growth in GDP for the third quarter was due to the combination of the Cash for Clunkers program and government support of the residential construction industry.

The article’s title is a bit misleading.  The actual data are not distorted, although they are preliminary estimates.  What might be distorted, for those who have not dug into the primary sources revealing the components of GDP growth, is the degree to which our newborn “expansion” is due to government support for the economy.

How is any of this useful for value investors?  Aren’t we supposed to totally disregard the macroeconomy?  It is relevant in the sense that many investors might be falling into “value traps” by assuming that the green shoots we are witnessing point to a sustainable recovery that could lead to a return of “normalized earnings” for companies exposed to consumer spending.

To the extent that “normalized earnings” in the middle part of this decade were due in large measure to easy credit and home equity financing and the obvious fact that the current “green shoots” are courtesy of Uncle Sam, it would be a grave error to make investments in companies based on a quick return to what very well may have been peak earnings in 2004 to 2006 rather than normalized earnings.