Loews Corporation is a diversified holding company with most of its value attributed to majority stakes in three publicly traded subsidiaries:  CNA Financial, Diamond Offshore, and Boardwalk Pipeline.  Based on market quotations at the close of trading on March 9, the value of shares owned by Loews in these three public subsidiaries was $14.7 billion. With Loews Corporation’s market capitalization at $15.3 billion, investors are paying less than $600 million for the rest of Loews, referred to in this article as the “Loews stub”, which had tangible book value of $3.7 billion as of December 31, 2011.

The Loews stub includes wholly owned subsidiaries HighMount and Loews Hotels along with cash and investments at the holding company level.  Given the current relationship between Loews stock price and the quotations for the three publicly traded subsidiaries, market participants are effectively saying that the intrinsic value of the stub is a mere 16 percent of tangible book value.  Either Mr. Market’s adding machine is broken or there are serious problems with the stated tangible book value of the Loews stub.

Loews may suffer from the perception that it is an unwieldy conglomerate with a complex structure making it difficult to fully understand the factors that make the overall company tick.  However, investors have the advantage of market quotations for CNA Financial, Diamond Offshore, and Boardwalk Pipeline as well as detailed financial statements filed with the SEC by these subsidiaries.   Although intelligent investors can never take market quotations alone as a reliable indicator of intrinsic value, in the case of Loews we can use these quotes to understand what value the market is implicitly placing on the parts of Loews that are wholly owned.

According to the company’s latest 13F report, Loews owned 242.4 million shares of CNA, 70.1 million shares of Diamond Offshore, and 102.7 million common units of Boardwalk Pipeline as of December 31, 2011.  The chart below shows a breakdown of the value attributed to each share of Loews based on the closing price of Loews, CNA, Diamond Offshore, and Boardwalk Pipeline on Friday, March 9: 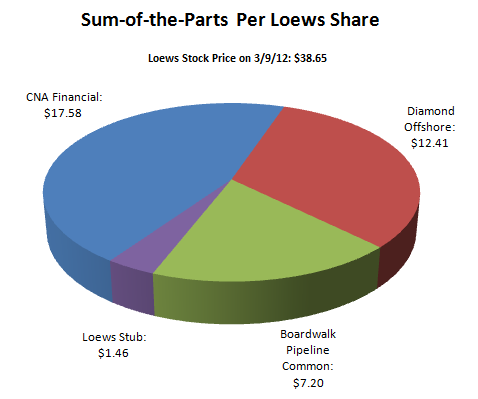 While our analysis of each of these companies makes us comfortable with recent market quotations, this article will not attempt to provide intrinsic value estimates for CNA, Diamond Offshore, or Boardwalk.  Instead, we will focus on whether the implied value of $580 million, or $1.46 per Loews share, is a reasonable value to assign to the Loews stub given the stub’s tangible book value of $3.7 billion, or $9.35 per Loews share.

What’s in the Loews Stub?

The Loews stub, as we define it, includes all sources of value within Loews Corporation that are not attributed to holdings in CNA Financial, Diamond Offshore, and Boardwalk Pipeline common units.  As noted previously, the implied valuation of the stub is currently $580 million based on taking Loews market capitalization and subtracting the value of the stakes in CNA, Diamond Offshore, and Boardwalk common units.

Loews provides segmented balance sheets and income statements that allow analysts to understand the economics of the stub more clearly.  The company provides three main categories for the stub:  HighMount, Loews Hotels, and Corporate.  Corporate includes net cash and investments held at the parent company level, 22.9 million Boardwalk Class B units, the Boardwalk Pipeline general partner interest and Boardwalk subordinated debt.  In total, the stub had tangible book value of $3.7 billion as of December 31, 2011.  We will take a brief look at each component of the stub with the goal of assessing whether stated tangible book is reasonable.  We spend most of the discussion on HighMount given our belief that this subsidiary’s value alone far exceeds the market’s implied value for the entire stub.

HighMount is engaged in the production, exploration, and marketing of natural gas, oil, and natural gas liquids.  The company’s proved reserves are mostly located in the Permian Basin in West Texas.  The company was founded in 2007 based on an assumption of assets from Dominion Resources for approximately $4 billion.  The following exhibit provides a summary of HighMount’s results since inception.  As of December 31, 2011, HighMount had total shareholders’ equity of $2,032 million and tangible equity of $1,448 million. 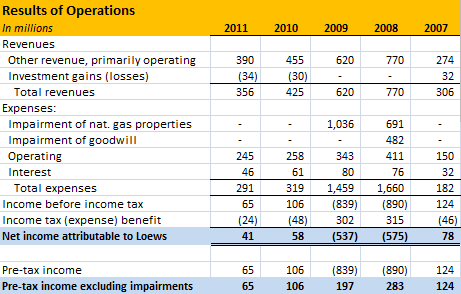 As we can see from the exhibit, HighMount has taken substantial impairment and goodwill losses over the past few years.  The impairments were due to a combination of reduction of reserve estimates and the impact of lower natural gas prices on the present value of HighMount’s estimated reserves.  HighMount follows the full cost method of accounting (as opposed to successful efforts) and capitalizes all direct costs of property acquisition, exploration and development.  Depletion charges reduce the capitalized amount based on the units-of-production method but failure of impairment tests can result in charges as was the case in 2008 and 2009.

HighMount’s production and sales statistics are provided in the exhibit below.  We can see that the company has been able to partially mitigate the decline in natural gas prices over the past few years through hedging activity.  However, with natural gas prices recently under $2.50/mcf, it is likely that revenues will be adversely affected this year and further impairments may be likely. 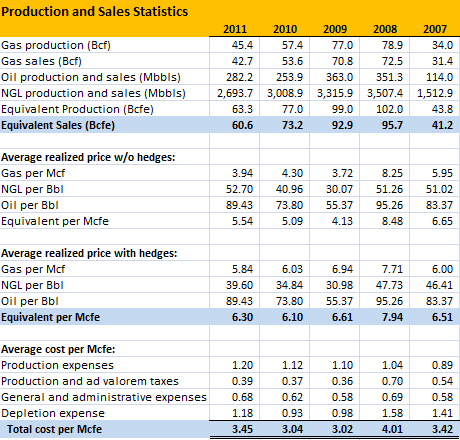 As of December 31, HighMount had $902 million of reserves according to the standardized measure which attempts to estimate the present value of net cash flows expected to be realized based on the company’s reserves.  The following exhibit shows HighMount’s proved reserves as of December 31:

Obviously, the ultimate value of the company’s reserves will depend on the price received for natural gas, oil, and natural gas liquids over a long period of time.  HighMount expects to spend $320 million in capital expenditures in 2012 to develop natural gas and oil reserves with a focus on liquid rich and oil drilling opportunities.  The focus on oil and liquids, if successful, would increase the proportion of reserves attributable to liquids and result in a more favorable outlook if natural gas prices remain at historically depressed levels.

Loews Hotels currently operates seventeen luxury lodging facilities located in the United States and Canada with a combined total of 7,641 rooms.  The hotels range from business oriented lodging to family resort destinations and are generally regarded to be upscale.  As of December 31, 2011, Loews Hotels had total equity of $194 million, of which $191 million was tangible equity.

The exhibit below provides key operating data for Loews Hotels for the past five years: 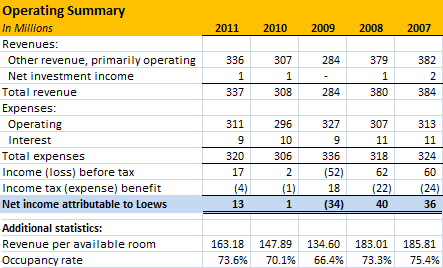 We can see that the company has posted improving results since the recession although key metrics such as revenue per available room and occupancy rate have yet to fully reach 2007-2008 levels.  Although the company is still posting sub-optimal returns on capital, it does not appear unreasonable to believe that the vast majority of the $191 million in tangible book remains intact.  Indeed, if net income rises to 2007-2008 levels, $191 million may significantly understate the intrinsic value of this business unit.

Loews carries substantial cash and investments at the holding company level and has a multi-decade history of intelligent deployment of capital.  As of December 31, 2011, Corporate had $2,071 million of tangible equity.  We will discuss the key investments held by corporate to judge whether it is reasonable to believe that this tangible equity exists.

In addition to holding 102.7 million common units of Boardwalk Pipeline, Loews also owns the general partner interest as well as all 22.9 million Class B units.  Only the value of the common units are reflected in the “sum-of-the-parts” exhibit presented earlier in this article. Although a full discussion of Boardwalk’s business and corporate structure is beyond the scope of this article, we will take a brief look at the economics of the general partner and Class B units.

According to Boardwalk’s 10-K, the general partner’s equity is $62.1 million and the Class B unit holder equity is $678.7 million.  We believe that these values are easily justified by the figures presented here and in conjunction with a more complete review of Boardwalk’s SEC filings which we encourage interested readers to pursue.

In this article, we have not presented a complete evaluation of Loews Corporation or its diverse subsidiaries.  Instead, we have approached the company with a more narrow focus.  Specifically, we ask:

Is the implied valuation of the “Loews Stub” reasonable?

We believe that the answer to this question is a definitive “no”.  The market is placing an implicit valuation of $580 million on a group of businesses and investments with a stated tangible book value of $3.7 billion on the Loews balance sheet.

Mr. Market’s implied  valuation asserts that Loews has seriously overstated the value of these businesses and investments.  However, the value of HighMount alone clearly far exceeds the market’s valuation of the entire stub.  One could stop right there if the only goal is to determine whether the market’s implied valuation is correct.  However, by also looking at the value of the Boardwalk Pipeline Class B and general partner interests along with Loews Hotels and other corporate investments, it becomes abundantly clear that most if not all of the $3.7 billion in tangible book value is very well justified.

In order to own Loews, an investor must be satisfied that the publicly traded common stocks — CNA, Diamond Offshore, and Boardwalk common units — are good values, or at least not grossly overvalued.  CNA is perhaps the most problematic given the spotty record of its insurance underwriting in recent years and a pattern of substantial “reserve strengthening” due to underestimating losses in past years.  Mitigating this history is CNA’s substantial discount to tangible book value.

Investors who wish to gain exposure to the Loews stub but have doubts about CNA, Diamond Offshore, or Boardwalk Pipeline common units can attempt to hedge out exposure to these companies through offsetting short positions.  In a theoretical trade where one is long Loews and short proportional shares of CNA, Diamond Offshore, and Boardwalk common units, exposure would be limited to the “stub” itself. However, there are practical considerations that may preclude this option for most individual investors.

Just as one does not require a scale to determine whether an obese man is overweight, precision is not required to see that there is something very wrong with the manner in which Mr. Market is pricing Loews stock relative to CNA Financial, Diamond Offshore, and Boardwalk common units.  We believe Loews is worth at least its book value of $47.49 per share and perhaps significantly more given management’s proven track record of intelligent capital allocation over long periods of time.

Disclosure:  Individuals associated with The Rational Walk LLC own shares of Loews Corporation.