Most investors focus almost exclusively on the income statement when evaluating companies and rarely pay much attention to the balance sheet, statement of stockholders’ equity, and the cash flow statement.  It is very common to hear analysts talking about how cheap a company appears to be on a price to earnings basis, but far more rare to hear a case made based on tangible book value or free cash flow.  Perhaps the myopia surrounding P/E ratios has to do with a human need to distill facts to a simple figure, but there is a reason Albert Einstein urged scientists to “make things as simple as possible, but not simpler”.

Based on simple figures, Kewaunee Scientific Corporation appears to be a value investor’s dream.  The company recently filed its annual report on form 10-K for fiscal 2010 which ended on April 30.  The headline numbers are impressive:  The company posted net income per share of $1.39 and book value per share stands at $11.83.  Return on average equity was slightly over 13 percent and the company rewards shareholders with a $0.40 annual dividend for a yield of 3.5 percent.  The shares have been flirting with 52 week lows but recently rallied to $11.50 which is still slightly below book value.  The company has no goodwill or intangibles embedded in book value.  Who would hesitate to jump at this golden opportunity?

Kewaunee Scientific has a venerable history dating back to 1906 when a group of investors hired eighteen employees and formed the corporation with a vision of creating a superior line of laboratory furniture and accessories.  According to the company’s website, until the early 1900s, American laboratories had to rely on Europe, and particularly Germany, for most types of equipment.  After World War I, efforts to expand American capabilities in this area grew more urgent and Kewaunee benefited from this trend.  Through military contracts, the company prospered during World War II and growth continued in the post war decades.  Based on the information in the company’s recent S.E.C. filings, the scope of the overall business has not materially changed.

Kewaunee has taken steps to expand internationally in recent years and has foreign subsidiaries in Singapore and India.  However, only 11.6 percent of revenues in the last fiscal year were from international sales and the company remains mostly a domestic supplier.  Management believes that international expansion represents an important growth opportunity, but notes that there are challenges and risks associated with gaining acceptance for the brand.

The company posted sales of $99.1 million for the fiscal year ending April 30, 2010 which represented a 4.7 percent drop from the prior fiscal year.  Net income per share fell to $1.39, a 16.3 percent drop from the prior year.  However, given that the company operates in a business that is very sensitive to new construction of laboratories and similar facilities, the “headline numbers” do not appear to be that grim given the severe impacts of the global recession.  A superficial evaluation would lead one to believe that the company is doing fairly well under the circumstances.

Sales increased in an irregular pattern from $77.1 million in fiscal 2001 to $99.1 million for the latest fiscal year.  While operating income and net income increased at what appear to be satisfactory annualized growth rates in low double digits, the progress was also irregular and losses were posted in 2003 and 2005.  Earnings per share advanced at a slightly lower rate than net income due to modest dilution from stock option issuance over the ten year period.  Dividends held steady at $0.28 per share until fiscal 2008 but have since advanced to $0.40 per share on an annualized basis.  One disconnect, which we will soon discuss in detail, is the slow progress in book value per share over the ten year period.

The company was able to increase the rate of earnings at a greater pace than sales due to improving margins, particularly over the past five fiscal years.  The gross margin improved from 17 percent in 2005 to 21.6 percent in the latest year while net margin advanced from 0.2 percent to 3.6 percent over the same period.  While the business is clearly low margin, reported improvements have been made but are these improvements real and sustainable, or can we expect a reversion to the low margins that prevailed earlier in the decade?  The exhibit below illustrates trends in margins over the past decade. 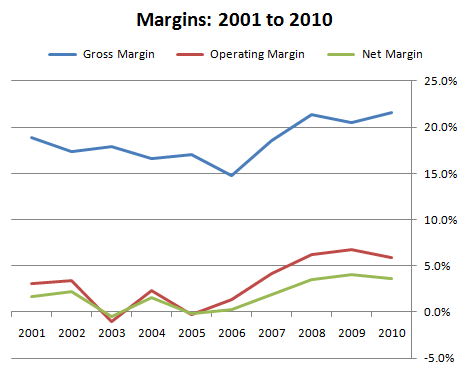 Over the past ten fiscal years, Kewaunee Scientific has reported a cumulative total of $6.63 in earnings per share and has paid out a cumulative $2.94 per share in dividends which would indicate retention of $3.69 per share.  One would hope that book value per share would have increased by at least this figure or perhaps by more if the company had unrealized gains based on investment of the funds.  However, the actual change in book value per share over the ten year period was only $1.41.  What accounts for the difference?

Total shareholders’ equity is computed by adding the common stock, paid-in capital, retained earnings, and accumulated comprehensive income/deficit accounts.  In the exhibit below (click the image to enlarge), we can see the breakdown of these accounts over the past ten years:

The account that stands out in the exhibit is “Accumulated Other Comprehensive Income (Loss)”.  This account reflects changes to shareholders’ equity that have not run through the income statement.  The bulk of the impact can be traced to an obscure accounting rule change dating back to 2006, most recently documented in Note 8 of the 2009 10-K filing:

What exactly does this mean?  The bottom line is that Kewaunee has an underfunded legacy pension plan that has been reducing shareholders’ equity over the past four years.  Rather than running this deficit through the income statement, the company is recording it as an entry to other comprehensive income.  The company’s defined benefit pension plan has been frozen since 2005 but liabilities for existing participants will continue.  As the company reports in the latest 10-k (Note 8), no cash contributions were made to the plans over the past three fiscal years despite a growing shortfall:

Kewaunee has generally made capital expenditures roughly in line with depreciation so it would be reasonable to consider the bulk of the capital expenditures to be of the “maintenance” variety.  This may be changing with a recent announcement of a major expansion in the company’s Statesville, North Carolina facility.  The company anticipates investing $5.5 million in the Statesville project in fiscal 2011.  The exhibit below shows the company’s estimated free cash flow over the past seven years.  The cumulative free cash flow over this period is only $2.4 million (click on the image for a larger view):

88 percent of cash flows from operations over the seven year period were devoted to capital expenditures and during this period the company recorded $17 million in depreciation charges.  This leads us to the conclusion that the vast majority of cash flows are not available to shareholders but must instead be reinvested in the business in order to retain its competitive position.  This is corroborated by the weak 2.8 percent annualized growth in revenues over the last decade.

While Kewaunee Scientific has many of the quantitative attributes needed to superficially qualify as a “value investment”, further investigation reveals several red flags.

First, we can see that the vast majority of free cash flows generated by the business must be reinvested simply to achieve modest advances in revenues.  Very little of the free cash flow can legitimately be distributed to shareholders without either increasing leverage or under investing in the existing business.

Second, heavy pension obligations booked to Accumulated Other Comprehensive Income have offset over half of the accumulated retained earnings over the past decade resulting in anemic growth in book value.  In other words, much of the reported net income over the past decade has been required to account for pension liabilities rather than to benefit shareholders.

Third, recent margin expansion may not be sustainable over time.  Net margins averaged under 1 percent from 2001 to 2006.  A return to a lower margin environment would result a significant decline in reported earnings per share.  For example, a hypothetical 1 percent net margin on 2010 sales would have resulted in net earnings per share of $0.38 rather than $1.39.  Even a more moderate decline in margins would make the company appear much more expensive on a price to earnings basis.

It is always interesting to run across a company selling under book value, but some companies do not deserve to sell at a premium to book value.  In our opinion, rather than signaling a bargain, book value and intrinsic value are probably roughly equivalent for a company with Kewaunee’s profile.