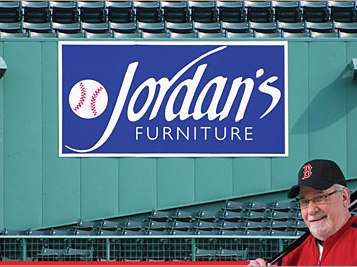 Starting tonight, customers who made purchases at Jordan’s Furniture from April 1 to May 2 have a chance to win a full refund if a Red Sox batter hits the image of a baseball on Jordan’s six by twelve foot sign at Fenway Park.  Jordan’s could be on the hook for approximately $40 million in the event of a fortuitously placed home run.  Jordan’s Furniture is a subsidiary of Berkshire Hathaway.

Jordan’s has a history of offering “monster deals” to customers and actually had to make large payouts in 2007 when the Red Sox won the World Series.  This is in keeping with Jordan’s concept of “Shoppertainment” that seeks to transform a fairly dreary chore into a more exciting process.  Jordan’s stores represent destinations where families can be entertained while shopping for furniture.

Apparently Jordan’s took out an insurance policy that covered part of the payout for the 2007 promotion but there is no word on whether a similar policy was purchased this year.  Chances are that one of Berkshire Hathaway’s insurance subsidiaries might write a policy on this type of promotion given that taking on very unusual risks for an appropriate premium is par for the course for Berkshire.  With 34 games to go this season, Red Sox fans will have well in excess of 1,000 at-bats in which to hope that the Jordan’s baseball in center field is hit.

Jordan’s Furniture has a very interesting history and approach to business.  Those who wish to learn more about Jordan’s can refer to Behind the Berkshire Hathaway Curtain and The Warren Buffett CEO.