“We get these questions a lot from the enterprising young. It’s a very intelligent question: You look at some old guy who’s rich and you ask, ‘How can I become like you, except faster?’”

One of the observations that many people make when they first hear Warren Buffett or Charlie Munger discuss investing is that the process seems far too simple and obvious.  There are no esoteric formulas or flowcharts of processes to follow.  Mr. Buffett, in particular, makes the investing process sound so simple and it even might be for those who share his intelligence and temperament.  However, the investing world is full of people with very high IQs. Many of them have the right mindset to succeed. Yet few have come anywhere close to replicating Mr. Buffett’s record.

There really is no way to understand Warren Buffett’s success without taking a careful look at the key investments he has made over the past sixty years.  A number of books, including two excellent biographies, chose to focus more on Mr. Buffett’s personal story which is also very interesting and perhaps necessary to fully understand his track record.  More recently, a book was published that examined his partnership years in detail.  It is likely that more books will appear in the future that study Mr. Buffett’s investing record in much more detail. 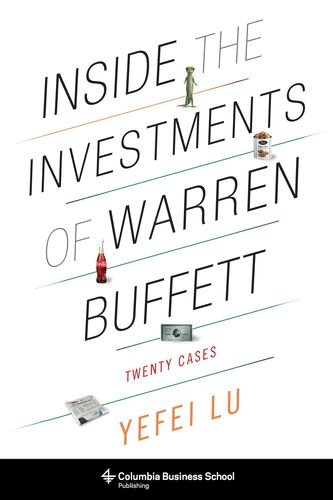 Inside the Investments of Warren Buffett, written by Yefei Lu, is a collection of twenty case studies representing important investments over the course of Mr. Buffett’s long career.  Mr. Lu found many of the biographical books written in recent years to be lacking in terms of delving into the details of specific investment decisions.  He decided to focus on telling the story of Warren Buffett only as it relates to key investments.  Mr. Lu approached the project by analyzing the investments from a third-party perspective of an analyst studying the business at the same time as Mr. Buffett’s investment.  According to the author: “My overall aim is to give readers a realistic analysis of the key investments that Buffett made and then have them draw their own insights and conclusions.”  Mr. Lu also gives us his opinion based mostly on using normalized earnings and evaluating value based on enterprise value to earnings before interest and taxes (EV/EBIT).

The general format for each of the cases involves some background on the nature of the business and how Mr. Buffett became involved.  For the early investments, the author was able to find financial data that provides a better understanding of the characteristics of the business and puts it into an overall context that is understandable to modern readers.  The Dempster Mill chapter, for example, provides early financial data and then goes into some detail regarding how Mr. Buffett hired Harry Bottle to address the inventory problems plaguing the company.  Other chapters are much less detailed.  For example, the Texas Petroleum chapter is just a few pages and lacks the level of detail of the Dempster and Sanborn Maps cases.

Most of the case studies, especially the more contemporary cases, include detailed financials for the investments in question which can help readers seeking that level of detail form a better independent understanding.  In a 262 page book aiming to cover twenty investments in depth, plus provide introductory and concluding thoughts, it is perhaps inevitable that certain details will be left out.  However, it was somewhat jarring to arrive at the end of the chapter on National Indemnity after less than three pages were devoted to covering what could arguably be considered the most transformative investment of Mr. Buffett’s career.  The chapter on See’s Candies is not much more detailed although the author makes more of an effort at arriving at a valuation and then looking at the success of the purchase based on data from the 2010 annual report.

It is difficult to fairly evaluate a book of this nature without thinking about who the typical reader might be.  If the reader is someone who has read nearly everything there is to read on Mr. Buffett’s career, all of the Berkshire Hathaway annual reports, and the partnership letters, the book might seem lacking in detail and somewhat frustrating in certain areas.  On the other hand, someone who is unfamiliar with Mr. Buffett’s career could very well find the content fascinating and the book might prompt further study.

Perhaps it would have been better to focus on only ten investments given the length of this book, or possibly expand the length of the book to more thoroughly cover twenty companies to the point where those who are already familiar with Mr. Buffett could derive even more value.  Nevertheless, Mr. Lu has added to the resources available to investors seeking to emulate Warren Buffett’s success.  The approach of looking at case studies to better understand Mr. Buffett’s track record is certainly the right way to go.

Disclosure:  The Rational Walk received a review copy of this book from Columbia Business School Publishing.  We were not obligated to review the book or to make any specific recommendation.

Inside the Investments of Warren Buffett: Twenty Cases