Throughout the 1990s, mutual funds were marketed to individual investors with stellar ten and fifteen year track records made possible by the record bull market of the 1980s and 1990s.  While there were a few notable interruptions, with the 1987 crash being the most obvious, most individual investors learned to “buy the dips” throughout this period.  Most large capitalization companies made significant advances in earnings during these years but the expansion in earnings multiples had the effect of turbo charging returns to investors.  Of course, this all culminated in the bubble of the late 1990s, but small investors remained relatively optimistic for much of the past decade, having been trained to buy the dips for so long.  However, optimism may now be turning to pessimism as small investors abandon stocks in disgust. 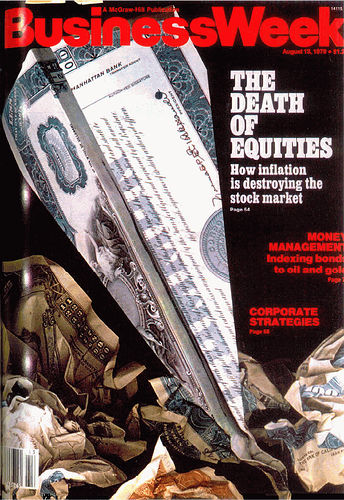 With the Dow Jones Industrial Average and S&P 500 both at levels first breached over a decade ago, the “buy the dips” mentality has been dramatically reduced.  A recent article in The Wall Street Journal is somewhat reminiscent of the famous 1979 Business Week cover story entitled “The Death of Equities”.  In the late 1970s, investors had endured well over a decade of stagnation in equity prices.  The Dow Jones Industrial Average first breached the 1,000 level in 1966 but failed to permanently ascend beyond that level until 1982.  The similarities between 1966-1982 and the period we are currently in are obvious and the pattern of investor sentiment turning against stocks may be repeating as well.

Safety in Cash and Bonds?

One major difference between the options available to investors in 1979 versus 2010 is that one could actually obtain decent returns from bonds and cash investments in the late 1970s and early 1980s.  The primary reason for the high level of nominal interest rates during the period was very high inflation, but anyone who purchased long term treasury bonds in the early 1980s ended up with very satisfactory returns due to a combination of the high coupon and significant price appreciation due to the disinflation of the 1980s.

While the disinflation that would take place over the following decade was not obvious to an investor in 1979, the fact is that high coupon treasuries were available as an option to stocks.  Compare the situation to what faces investors today with yields on the ten year treasury near 3 percent and yields on cash equivalents near zero.

One can say that the inflation scenario is vastly different today compared to the late 1970s and this is probably true.  It is folly for investors to attempt to predict interest rates, inflation, and most other macroeconomic trends which is why the best value investors focus on individual stocks.  Still, this does not mean that we cannot make some observations regarding broad asset allocation decisions being made by individual investors such as those profiled in the Wall Street Journal article:

There are many alternatives to treasury bonds for conservative investors who wish to generate income while controlling risk.  Many alternatives are far more likely to result in the protection of wealth as measured in real terms compared to a 3 percent ten year treasury.  One such alternative is to purchase I Bonds or Treasury Inflation Protected Securities  (TIPS) which offer a hedge against inflation along with a very modest real return.  However, for this article we will focus on the possibility of using dividend paying stocks as an alternative.

It must be stressed that dividends on common stock are not contractually protected obligations of the company.  The Board of Directors is almost always free to pass common stock dividends at any time.  As a result, investors looking for income must examine a company’s track record over many years, the competitive advantages of the business, and make an assessment regarding future prospects for the dividend.  Simply buying the highest yielding stocks is a recipe for disaster.

With these caveats in mind, we provide a sample of high quality companies with a solid track record of meaningful and rising dividend payouts.  Most of the companies on this list yield over 3 percent, the current yield of the ten year treasury.

Each of the companies listed above are well known, stable, and high quality businesses that have demonstrated an enduring ability to pay dividends on common stock over a long period of time.  Equally important, each of these companies has increased dividends over time, in some cases by very significant amounts. The point is not to make specific recommendations but to illustrate the potential for purchasing dividend paying stocks to produce income.

There are risks associated with any investment strategy and buying dividend paying common stocks is no exception.  Some of the potential risks include:

The point of this article is not to suggest that investors should abandon all bonds, or even that some government bonds should be included in an income portfolio.  However, it seems unwise for investors to concentrate their entire portfolio in bonds with the hope that abandoning stocks will result in an elimination of investment risk.  Instead, investors should consider maintaining at least part of their income portfolios in strong dividend paying common stocks that have the potential to increase payments over time and offer a degree of inflation protection.

Disclosure and Disclaimer:  No position in the companies listed in the article, all of which are provided only as examples of a potential dividend income strategy.  Consult with your financial advisor to ensure that your portfolio and security selection is appropriately aligned with your personal financial situation.