How Did Berkshire Hathaway’s Book Value Fare in Q3 2009?

Warren Buffett is well known for refusing to provide earnings guidance for Berkshire Hathaway, and rightly so in my opinion.  If fewer companies spent the time and energy required to provide guidance to analysts, managers could focus more attention on running the business and maximizing shareholder value rather than obsessing over “meeting the number”.

Since guidance is not provided, only a few analysts publish earnings estimates for the company and such estimates are often far from accurate because of the many unpredictable elements in Berkshire’s diverse collection of businesses.  There seems to be little point in trying to come up with estimates with pinpoint precision for a company with over seventy operating businesses.  At best, a wide range can be estimated based on various assumptions.

In contrast, it is possible to estimate Berkshire’s book value performance from quarter to quarter with less risk of being far off the mark.  This is true because the contribution of earnings for a particular quarter have a relatively muted impact on Berkshire’s many years of retained earnings.  Furthermore, estimates of Berkshire’s book value are made easier by the fact that the company’s marketable securities holdings are published in SEC filings.

It is also logical to focus more attention on what a company owns rather than assigning great meaning to quarterly swings in earnings.  It seems like most analysts obsess over whether a company misses earnings by a penny or two without ever glancing at the equity account on the balance sheet.

So with the caveat that this is, at best, a “back of the envelope” calculation, this article attempts to come up with a likely range for Berkshire’s book value as of September 30.

Berkshire Hathaway filed Form 13F on August 13, 2009 which lists all positions held as of June 30, 2009.  Form 13-F does not include foreign stocks that are traded on foreign exchanges, so some of Berkshire’s equity investments are not included.  Nevertheless, the vast majority of the value of the equity investment portfolio is accounted for on Form 13F and we will disregard changes in value of foreign holdings for this analysis.

Applying closing prices as of September 30, 2009 to the positions Berkshire held at June 30, 2009 and adjusting for the sale of Moody’s shares during the quarter, the portfolio should be valued at approximately $55.8 billion at the end of the third quarter.  This is an increase of approximately $6.8 billion, or 14 percent, over the course of the quarter.  This slightly trailed the 15 percent return of the S&P 500 for the third quarter (dividends not included).

A spreadsheet containing full details on the portfolio is provided at the end of this article.

In addition to changes to the value of the portfolio, Berkshire will have operating earnings that will be retained and added to book value.  As noted previously, operating earnings can only be estimated imprecisely given the nature of Berkshire’s diverse set of operating companies.  Berkshire breaks down the net income attributable to each reporting segment in the “Results of Operations” section of quarterly reports. We will estimate a wide range for each segment.

The exhibit below provides a summary of the low and high range for estimates for the third quarter of 2009 along with actuals for Q2 2009 and Q3 2008 for comparative purposes.  Total net earnings from operating businesses are forecast to come in between $1.7 billion and $2.1 billion.

As discussed here in the past, Berkshire Hathaway has entered into a number of derivatives contracts that are marked to market each quarter even though there are limited collateral requirements and, in the case of the equity put options, cannot be exercised for many years to come.  During the fourth quarter of 2008 and the first quarter of 2009, these mark to market calculations resulted in steep declines to Berkshire’s reported book value.  In the second quarter of 2009 and in the third quarter, large gains will be realized to offset the prior derivatives losses.

Berkshire’s equity put options are based on different underlying indices and not all of the details are disclosed in SEC filings.  We know that the S&P 500 is used as the underlying index in some cases, but there are also foreign indices on non-US contracts and exchange rate fluctuations will have an impact as well.  We will not attempt to calculate Berkshire’s likely derivatives gain with any precision here.  However, recognizing that the S&P 500 gained roughly the same amount during both the second and third quarter, we can guess that derivatives gains may be somewhat similar to the second quarter experience.  We will use a range of $1.2 billion to $1.8 billion compared to the second quarter’s actual gain of $1.5 billion.

Book value for the quarter will increase due to the increase in the value of the equity portfolio less deferred tax liabilities plus retained operating earnings and the net gain on derivatives for the quarter.  We can then estimate the change in book value per share during the quarter.  The exhibit below consolidates the figures: 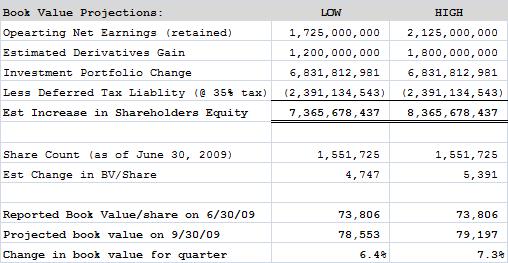 Although the ranges of estimates for operating earnings and derivative gains are very wide, we can have more confidence in the impact of the equity portfolio estimates.  Most importantly, even with the wide range in estimates, the bottom line book value estimate only varies by a small amount.  It seems likely that Berkshire Hathaway’s book value per share should be somewhere between $78,500 and $79,200 as of September 30, 2009.

For more details on Berkshire Hathaway’s 13F filing and the projections discussed here, please click on this link for an excel workbook.  The workbook contains two worksheets.  The first sheet shows all of the positions on the 13F filing with updated closing prices as of September 30.  The second sheet shows the earnings projections and book value projections.  The accuracy of the data has been verified to the best of our ability.  If any errors or omissions are noticed, please contact us using the link at the bottom of this article.

How Did Berkshire Hathaway’s Book Value Fare in Q3 2009?