Greenspan: Those Who Predicted Housing Bubble are “Statistical Illusions” 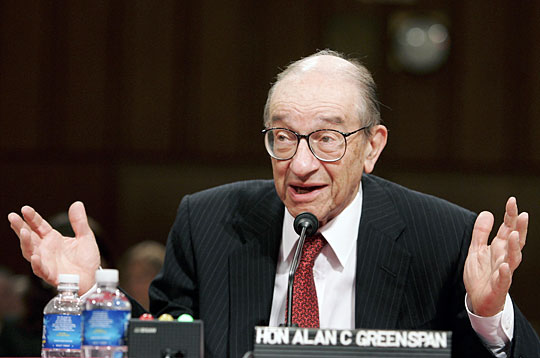 Perhaps no other government policymaker has suffered as much reputational damage due to the housing collapse as former Federal Reserve Chairman Alan Greenspan.  Mr. Greenspan has defended his record in recent months and recently published a paper outlining his views regarding the housing bubble and subsequent crash.  In Mr. Greenspan’s view, Fed policy actions had little to do with the crash.

One of the investors Michael Lewis highlighted in his recently published book, The Big Short, is Michael Burry who ran the Scion Capital hedge fund from 2000 to 2008.  Mr. Burry was one of the first investors to spot the growing housing bubble and to devise a strategy to profit from the eventual collapse.  Mr. Burry published an op-ed article in the New York Times yesterday that sheds some light on the attitudes that convinced policymakers that no bubble was forming:

I have often wondered why nobody in Washington showed any interest in hearing exactly how I arrived at my conclusions that the housing bubble would burst when it did and that it could cripple the big financial institutions. A week ago I learned the answer when Al Hunt of Bloomberg Television, who had read Michael Lewis’s book, “The Big Short,” which includes the story of my predictions, asked Mr. Greenspan directly. The former Fed chairman responded that my insights had been a “statistical illusion.” Perhaps, he suggested, I was just a supremely lucky flipper of coins.

Mr. Greenspan said that he sat through innumerable meetings at the Fed with crack economists, and not one of them warned of the problems that were to come. By Mr. Greenspan’s logic, anyone who might have foreseen the housing bubble would have been invited into the ivory tower, so if all those who were there did not hear it, then no one could have said it.

This is vaguely reminiscent of the old joke regarding two economists walking down the street and noticing a $100 bill lying on the sidewalk.  One economist leans down to pick it up, but the other economist says that doing so would be pointless.  If the $100 bill was real, someone else would have already picked it up.

Mr. Burry was able to pick up many “$100 bills” by being alert regarding the building crisis and figuring out ways in which he could profit from the eventual crash.  Meanwhile, economists like Mr. Greenspan obviously failed to recognize the building crisis.  At some point, those who were wrong about the housing bubble should simply step up and admit that they missed the warning signs.

While the free market is efficient most of the time, it does not follow that major inefficiencies cannot exist.  Such inefficiencies appear all the time in the stock market and can also occur throughout the economy at times.  Economists would better serve the public interest by studying the methods of those who were able to spot the housing crash rather than to explain it away as a “statistical illusion”.

Greenspan: Those Who Predicted Housing Bubble are “Statistical Illusions”