Most of the headlines over the past week regarding the Deepwater Horizon disaster have focused on the $20 billion escrow account that BP was forced to set up for victim compensation.  However, the far more important development from a public policy perspective is the steady stream of information now coming to light regarding the well design that BP decided to use.  The clear weight  of the evidence points to human error as the cause of the disaster.

The Congressional committee investigating the disaster outlined five areas where BP is alleged to have taken shortcuts that could have contributed to the blowout of the well.  One of the most critical involves the use of a full string of casing, also known as a “long string”, rather than a more expensive option known as a liner-tieback system which would have added more redundancy in terms of preventing gas leaks.  The Wall Street Journal published a detailed analysis of BP’s reliance on the “long string” approach along with a table listing other wells in the Gulf of Mexico using this design.  A graphic from the article illustrates the difference between “long string” and “liner-tieback” systems (click to enlarge): 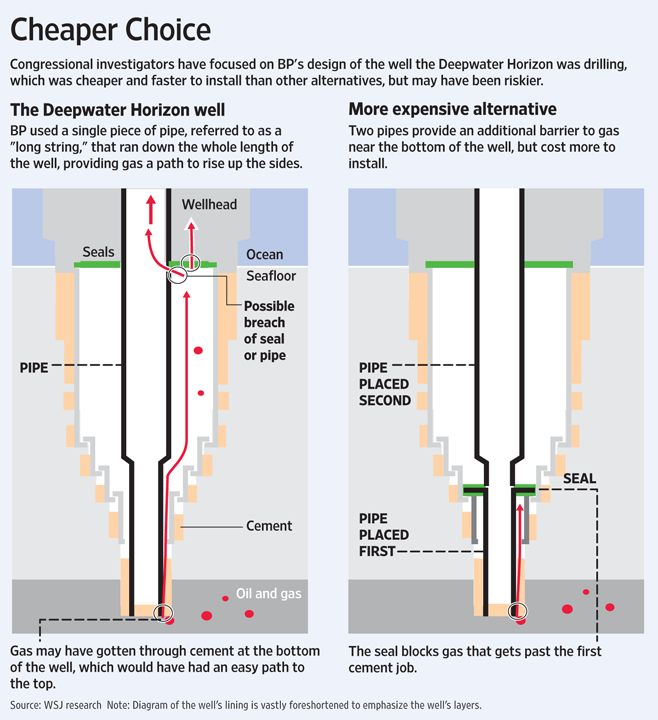 Sources quoted by the Wall Street Journal indicate that there are situations in which a “long string” casing can be safely used.  In cases where the geology of the region is well understood and the wells are expected to be under lower pressure, long strings can be used safely.  However, in high pressure wells or in areas where the pressure level is not known, liner-tiebacks provide a more conservative choice.  The Deepwater Horizon well was  known to be under high pressure and was exploratory in nature which would indicate that liner-tieback is the safer choice.

No one has made definitive statements regarding whether the particular choice of well casing led to the disaster.  However, this was not the only area where BP’s engineering has been criticized.  Four additional alleged deficiencies were cited in the letter from the Congressional committee to BP CEO Tony Hayward.

When an engineer constructs a bridge intended to carry a certain weight, the design that is used has breakpoints far above the anticipated maximum weight.  The same is true for all kinds of other projects such as constructing high rise buildings along earthquake faults, designing airplanes to withstand greater than anticipated stress, and ensuring that a dam is capable of greater than the maximum anticipated water pressure.

The other immutable fact of many designs is that the weakest link is going to act as the breakpoint and cause a failure.  When multiple shortcuts are taken, it increases the probability of a catastrophic failure at some link.

President Obama has set up a Commission of experts to study the safety of deepwater drilling and he is insisting on waiting for the report of the commission prior to allowing any work to continue in the Gulf of Mexico.  The six month moratorium was justified by the Obama Administration partly based on the recommendation of a number of experts.  The Wall Street Journal ran an editorial this week documenting the fact that the moratorium was not part of the set of recommendations from the experts;  instead, it was inserted after the experts signed off on the report.  Eight of the experts have gone on record stating that they do not support a moratorium.

The only rational way in which to proceed is to quickly get an understanding of the causes behind the Deepwater Horizon disaster and to take concrete steps to ensure that a similar disaster will not occur in the future.  Thus far, there is no evidence to suggest that anything other than human error is behind the well blow out.  This error may have been motivated by cost considerations or the engineers in charge may have simply failed to consider the question of redundancies in their design.

The solution is to have a robust enforcement mechanism in place where exploration firms are required to adhere to strict standards.  This will require regulatory changes and the cost of exploration will increase for firms that have lax safety standards.  Given the serious externalities caused by corner cutting, this is an obvious case where government has a regulatory role to play.  However, at present the government has overreached with the ban on drilling when every indication is that tighter application of safety standards would be sufficient to prevent a repeat of the Deepwater Horizon disaster.

Halting all deepwater drilling guarantees that there will not be deepwater well blow outs in the future just like refusing to board a plane ensures that you will never die in a plane crash.  The risk of deepwater drilling in the Gulf of Mexico must be properly weighed against the risks of not drilling which include greater reliance on imported oil, increased risk of accidents involving ships transporting such oil, economic turmoil on rig workers, and associated economic impacts on the entire Gulf Coast economy.

Disclosure:  The author holds investments in companies engaged in oil and gas exploration in the Gulf of Mexico.