In recent days, we have posted a number of articles regarding the oil industry with a focus on the implications of the Deepwater Horizon disaster.  The Financial Times published a graphic that illustrates current activity in the Gulf of Mexico along with the impact of the drilling moratorium in terms of costs, employment, and the domestic supply of oil.  The graphic appears below (click to enlarge).  Click on this link for a related Financial Times article. 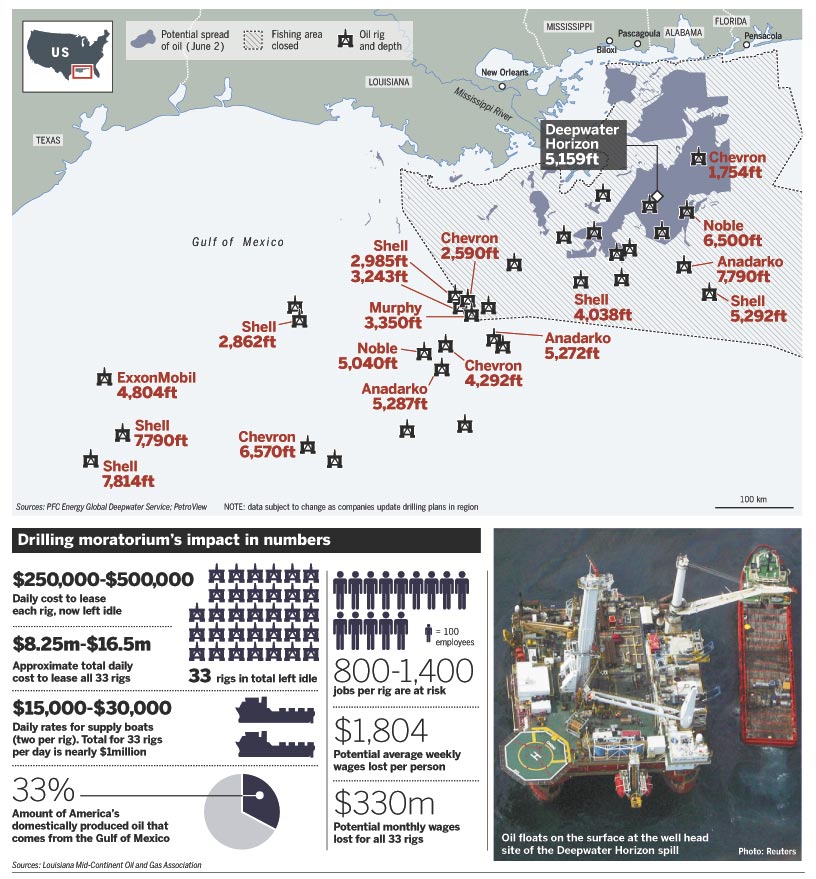 On Friday, President Obama made the following statement regarding the moratorium based on a Wall Street Journal article published yesterday:

Mr. Obama said he was trying to carve a middle path on deepwater drilling, suggesting he did not want to end exploration, but he did not want to cut corners either. “I do not want to see this repeated again,” he said, indicating that if safety and environmental standards were tightened effectively, it could help the oil industry overall.

A final decision on deepwater drilling will be made after an independent commission on the disaster reaches its conclusions in six months. But under pressure from Gulf officials, Mr. Obama said Friday he had instructed the panel’s chairmen to report back as quickly as possible. He indicated a decision could then come sooner.

As we pointed out on Thursday, the confusion regarding shallow water restrictions only needlessly adds to the level of economic uncertainty that already exists along the Gulf Coast.  Hopefully, the panel reviewing deepwater drilling will report its findings in a timely manner in keeping with the President’s stated objective.