I have made it a habit to save the print edition of the Wall Street Journal on certain key dates including March 30, 1999, the day after the Dow Jones Industrial Average (DJIA) first crossed 10,000.  Although the DJIA is a flawed benchmark, no other  index has captured the imagination of the public to the same degree.  As we again approach the 10,000 level, there appears to be no shortage of commentators ready to discuss what this means for the overall market.

It comes as no surprise that value investors attach no particular significant to round numbers for individual stock quotations or for market indices.  However, it is hard to avoid recognizing the obvious fact that the past decade has seen very disappointing returns for index investors given that stocks started the ten year period at very high valuations.  This is true of many individual DJIA components as well.  One example of a lost decade for an individual DJIA component, Wal-Mart Stores, was discussed here earlier in the year.

The ultimate lesson is that the price investors pay when entering a position matters.  An investor can correctly identify a wonderful business that will compound sales and earnings for a decade but still end up with poor returns if the entry price is excessive and earnings multiples contract.

Here are a few examples of the stories that ran on March 30, 1999 in the Wall Street Journal.  As I flip through the print copy, it is striking how different the physical paper looked a little over ten years ago.  The paper was still a large broadsheet, charts were primitive, and only a few ads were in color. 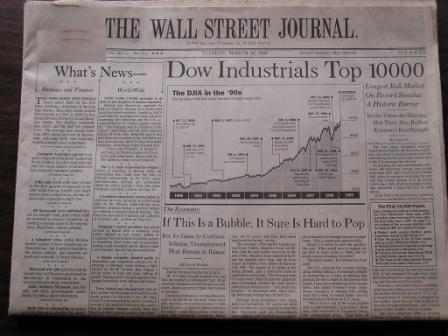 And a few statistics from “Money & Investing” recording activity on March 29, 1999:

This trip down memory lane brings to mind an old saying:  Those who fail to study history are doomed to repeat it.