Who would want to purchase a bond that will not mature until years after any purchaser is long dead?  This is the question many are asking with the new interest in “century bonds” sparked by yesterday’s $250 million reopening of Norfolk Southern’s 6% bonds maturing in 2105.  The bonds sold slightly above par to yield 5.95 percent to maturity.  The century bonds yield approximately 90 basis points more than Norfolk Southern’s 30 year bonds.  Only companies that are perceived to have nearly permanent staying power are able to issue bonds with such a long maturity.

While century bonds make for interesting headlines, the economics of very long term bonds are not quite as dramatic.  The vast majority of the present value of such bonds are accounted for by the cash flows from interest over the initial thirty year period.  The simple arithmetic of present value calculations shows that at a 6 percent discount rate, 82.6 percent of the purchase price of such a bond will be recovered over the first thirty years in present value terms leaving less than 18 percent of the value accounted for by cash flows from years 30 to 100.

The following chart shows the cumulative present value of cash flows expected from a $1,000 face value of a 100 year bond paying 6 percent annual interest with the cash flows discounted at a rate of 6 percent: 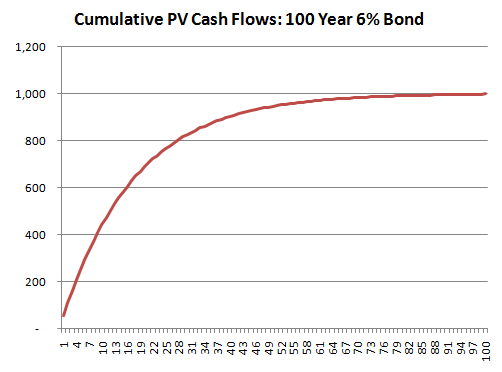 Much is made of the fact that the $1,000 principal payment will not be made for a century, but the present value of this principal payment (combined with the final interest payment of $60) is only $3.12 when discounted at six percent over a century.  By year 79, 99 percent of the present value of the bond is already accounted for by interest payments.

The point is not to suggest that 100 year bonds are not very long term securities;  they certainly are and a yield premium over thirty year bonds is justified.  However, dramatic statements made in many news articles regarding not receiving the principal payment for 100 years are entirely meaningless when viewed in terms of present value.

Is it important whether the company will be around in 100 years to repay the principal?  Yes, but it is much more important to believe that timely interest payments will be made over the next 30 to 40 years which accounts for the vast majority of the value of the bonds in present value terms.

This point of this article will not be particularly interesting to sophisticated investors, including the institutions buying the Norfolk Southern bonds in question, but it is still worth pointing out to clear up a common misconception that is poorly covered in the media.