In a statement that could be cause for some concern, BYD Chairman Wang Chuanfu appears to be hedging on the pricing and distribution of the company’s flagship e6 electric vehicle within the United States market.  The Wall Street Journal has reported that there are still many questions regarding the initial product introduction and whether the e6 will succeed in gaining a following within the United States. 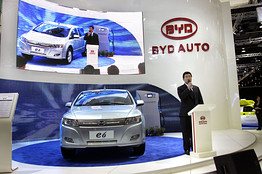 BYD’s progress in the emerging electric car field is of particular interest to Berkshire Hathaway shareholders.  Berkshire’s 9.9% stake in BYD represents a bet on advanced battery technology that many view as a major competitive advantage.  BYD is almost completely unknown within the American market and faces the formidable task of building brand identity from scratch.

In addition to making the case to American consumers when it comes to the quality and reliability of an unknown Chinese brand, the company will also need to convince a skeptical audience regarding the exceptional claims of a 200 mile range on a single charge.  The 200 mile range is made possible by BYD’s proprietary battery technology and far surpasses the electric-only range claims of competing products such as the Chevy Volt.

In many ways, the cautious approach that BYD is taking makes a great deal of sense.  It would be reckless to introduce a product into the American market if there are doubts that it is ready for prime time.   On the other hand, the emerging market for electric vehicles is heating up and competitive pressures could result in a first mover advantage.

Berkshire Hathaway shareholders can take some comfort in what Vice Chairman Charlie Munger had to say about Wang Chuanfu in a recent interview in Fortune magazine:

Let’s hope that Wang Chuanfu makes the right decisions when it comes to translating his technology into an appealing consumer product in a crowded and competitive field catering to recession weary and skeptical consumers.

For more coverage of BYD, please refer to the BYD article category.